Watch The First Star Wars Roll Out Episode On YouTube

The first Star Wars Roll Out episode was released on August 9th. In the pilot BB-8 goes on a jungle adventure and meets the plants and wildlife, much to his chagrin.
So what is Roll Out like? Click through for a few thoughts about the show! 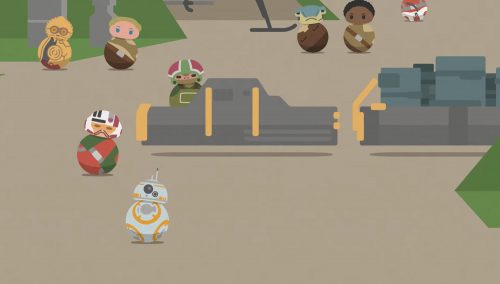 Click to watch the video! You can see, among others, BB-Nunb, BB-3PO and BB-Konnix in the screenshot.

The animation is very, very basic, this looks like one person did it at home on their PC. Think side-scrolling South Park (everything is virtually two dimensional) with BB units and no dialogue, just the typical BB sounds. It is unknown if the human BB units will talk, maybe not. But while South Park looks crude on purpose, you have to wonder how much budget Roll Out has, probably very little. The story, if you can call it that, seems to be a bit random, it stops abruptly without any conclusion whatsoever (it almost seems to be a cliffhanger, but I am certain it’s not meant as such) and I could detect no “morals” or “lesson”, other than maybe “kid, don’t go into the forest on your own, you’ll be scared of the animals!”.

It’s difficult to judge this new show, since this is aimed at very young kids, I would say pre-school age, even infants. Think Teletubbies and its target audience. Adults will probably find the show “cute” at best and mildly funny, but adults are not meant to watch the shorts for themselves, but with their very young kids. Even somewhat older kids may already no longer be the target demographic here. Galaxy of Adventures is better suited for them.

What we can talk about are the number of clicks for the video. After one day, the pilot episode has about 7,500 views. Typical comments (there are only about 120) for the video are “it’s cute!”, followed by “why?” “is it canon?” and “where’s the new GoA episode?”. And cute it is. Maybe BB Star Wars characters could be toys for pre-school kids, should Hasbro ever decide to support the new show with a toyline. However, the very low number of views is certainly troubling here. Both Forces of Destiny and Galaxy of Adventures had a lot more views after day one. We’ll have to see if the show will get a bit more promotion, how much views the pilot will have after one week and how many episodes Lucasfilm has planned in total. Also, the ultimate question is if actual pre-school kids and infants will watch this and not just adult fans who watch anything Star Wars.