What Are Your Plans For Triple Force Friday?

A comment for one of the recent JTA articles made me think. A reader said this, and I paraphrase here: ” I am not buying a single thing on Triple Force Friday. I will find all of that merchandise at 80 to 90% off early to mid next year”.

So I wonder… what are your plans? Do you plan on buying everything at full price on October 4th and the days and weeks following that? Or will you patiently wait for the toys to get the usual huge discounts at Walmart or to eventually show up at Ross, Ollie’s and dollar stores for even less?
I think the trend of recent years, to see that again and again expensive sets are inevitably discounted to ridiculuous levels (the TVC Assault Tank for $12.99? Really? TBS Rex figure for less than $5?) may convince more fans than Hasbro would like not to buy anything on Triple Force Friday and to wait until everything is much cheaper.
So what are your plans? Buy everything on release? Or patiently wait until 2020 to find most or even all the toys for cheap? I think both Hasbro and Disney need Triple Force Friday to be a huge success. I believe this could make or break Star Wars toys or at least shape the future of the toyline. Hasbro still hasn’t announced anything concerning the license. We can only guess what keeps Disney and Hasbro from announcing the extension. So Triple Force Friday and toy sales for The Rise of Skywalker may be the deciding factor here. But if many fans decide to play the waiting game revenue may be seriously affected. So tell us your plans in the comments! 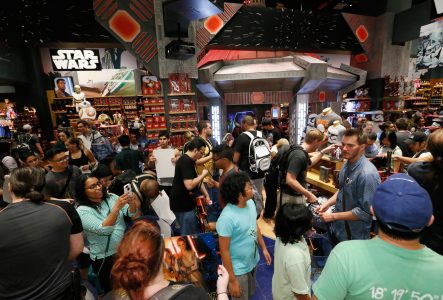 Crowds buying toys on Force Friday 2015 for The Force Awakens