We saw the magazine scans last week, so we knew it was only a matter of time before SH Figuarts would officially announce the two new Star Wars figures of Luke and Han. You can now find official promo photos for both The Force Awakens Han Solo and The Last Jedi Luke (Crait) on the SH Figuarts homepage.
Luke Skywalker will come with two headsculpts, which look much better than the blurry magazine scans, the usual hands, lightsaber hilt, a lightsaber with blade and the two golden dice (they are tiny). Han seems to come with almost nothing, other than a few alternate hands, and a blaster, he comes with an extra holster that was molded with a blaster inside of it, so the blaster is non removable, this is the same approach SHF chose for their previous A New Hope Han Solo figure.
Both figures go on pre-order on August 1st (Thursday), local Japanese time (Japan is 13 hours ahead of EST). Check the usual Japanese etailers if you want to secure your figure. The figures are not web exclusives so could, in theory, sell out eventually. Release date is December 2019. 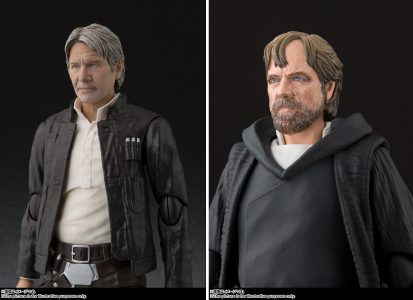 Next Article: Star Wars on Disney+ And Disney Break A Record!