Now this is not related to toys or entertainment in any way, but I think the following story is really inspiring and thus I decided to share it here: researchers at the University of Utah have developed a prosthetic arm that is not only controlled by your brain (using electrical signals from muscles), but which also allows users to feel the things they touch, which enables them to manipulate things in a way few other prosthetics can, because they lack tactile feedback. And the name the researchers gave the arm? The “LUKE arm”, in honor of Luke Skywalker’s hand prosthetic from Empire Strikes Back. Here you can read a story about an amputee who got a LUKE arm prosthetic and what an enormous positive impact it had on him, especially because the prosthetic lets you feel what you touch. And if you want to know more about the arm, go to the site of the manufacturer. There’s also a short video on YouTube which shows off the arms capabilities. Isn’t it great when sometimes life imitates art and things we once deemed science fiction are now a reality? At least when it’s something as positive as a new prosthetic that makes life so much better and easier for amputees. 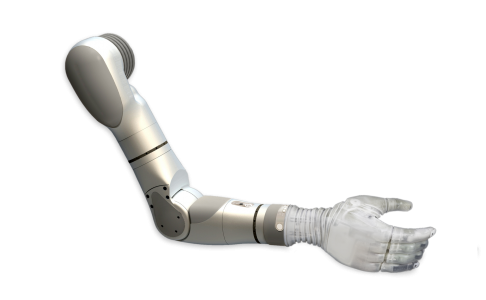 The LUKE arm in its full arm configuration