Early this morning Hasbro released their financial report for the 2nd Quarter 2019. Click through for the numbers!

Update: comments from the Hasbro earnings call added to the article, Star Wars is discussed by Brian Goldner and team (while it wasn’t mentioned at all in the presentation).

Find comments by Hasbro from the earnings call at the bottom of the page! 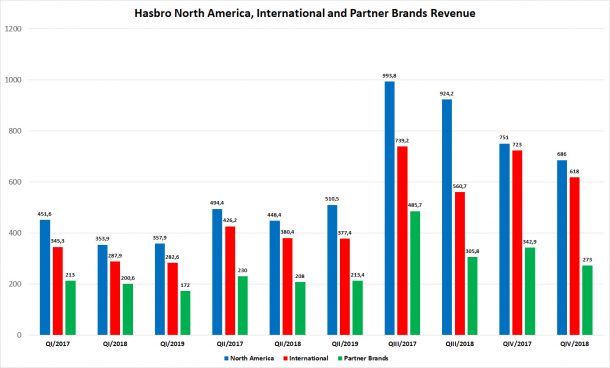 A short look at how much each segment, Franchise Brands, Partner Brands etc contribute to Hasbro’s revenue:

Hasbro’s own Franchise brands account for almost 60% of their overall revenue. Among Hasbro’s franchise brands is Monopoly, Transformers, Magic The Gathering, to name just a few things.

Let’s look at just the Q2 results over the past 5 years: 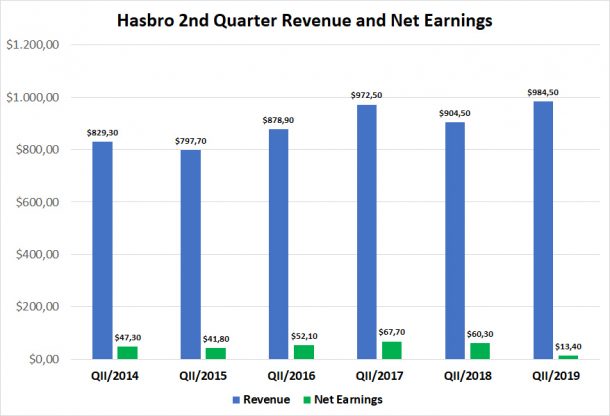 This was Hasbro’s best second quarter in years.

But we all want to know about Star Wars and partner brands. First, here is the chart that shows partner brand growth quarter on quarter: 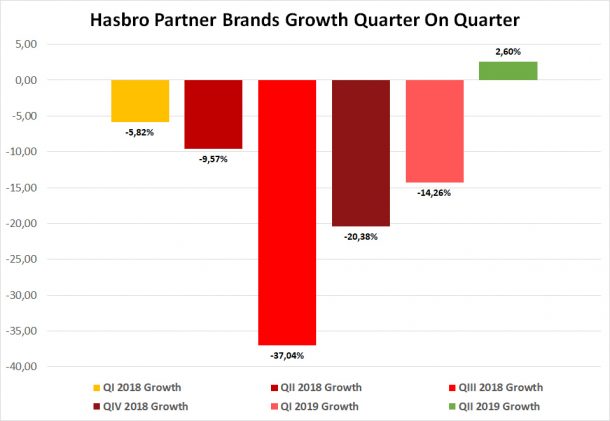 As you can see after several quarters of declining partner brands sales, Hasbro’s partner brands finally see growth again when we compare Q2/2019 to Q2/2018.

However, according to Hasbro’s earnings presentation, that growth is primarily due to Marvel’s Avengers and Marvel’s Spiderman Far From Home. Which is no surprise. Endgame is only the biggest movie of the year.

And the sad news: Star Wars was not mentioned once in the presentation and report. This is the first time in many years Star Wars is not even worth a single mention. We can speculate that Star Wars sales declined once more (maybe not as much anymore). If Star Wars had shown growth Hasbro certainly would have mentioned it. But without movie support and only few new toys on shelves that is extremely unlikely. The real question is if the complete absence of Star Wars in Hasbro’s presentation has a deeper meaning, especially in light of a potential license extension. Maybe not. Maybe the franchise was just not worth mentioning in Q2/2019. This will certainly change for Q4/2019, with Triple Force Friday and the marketing push for The Rise of Skywalker.

But even with (most likely) lackluster Star Wars toy sales in Q2/2019 Hasbro is doing fine, the demise of Toys R Us seems to no longer have a negative effect and revenue is growing again in North America, Europe and Asia/Pacific, only Latin America saw a decline.

I might update this article once a transcript of the earnings call is available, maybe Hasbro provides a bit more additional info about Star Wars here.

And here are several statements from Hasbro about Star Wars from their earnings call conference:

Within our Partner Brand portfolio, Hasbro toys and games for Marvel’s AVENGERS: END GAME and Spider-Man franchises along with innovation in Hasbro’s preschool line of Marvel superhero adventurers and new MEGA MIGHTIES 10-inch figures delivered revenue growth in the quarter.

As we look to the fourth quarter, retailers have strong plans for the October 4th launch of Hasbro product for both Frozen 2 and Star Wars: The Rise of Skywalker. Our team is ready for the most important quarters of the year. We are driving revenues around amazing innovation and storytelling and as this management team has done in the past, we’re investing for future profitable growth.

Brian Goldner about Triple Force Friday and Star Wars being a top seller at Comic Con:

And then, in the fourth quarter, Deb mentioned it, but to put it in the context of this question, we’re clearly very excited about October the 4th, it’s Triple Force Friday. We’ll be supporting all the elements of the Star Wars program and launch. We have really an amazing array of new Star Wars product in support of the film, in support of the Fallen Order video game, in support of The Mandalorian, which begins on Disney Plus.

So the Star Wars exclusives are top sellers, which is encouraging. The Darth Vader retro figure sold out in minutes. Boba Fett and the “Jedi Destiny” TVC set are equally loved and in demand by fans and the Sith Trooper exclusive will certainly also be very popular, just based on design and the many extra weapons he comes with. Previously (in the Q1 earnings call), Brian Goldner mentioned the very strong sales for the Amazon exclusive TBS Palpatine set.

We are in the lull before the storm, that will hopefully be Triple Force Friday, when Hasbro will release product not just for TROS, but for the live action show and video game. Q3 will certainly see meager results for Star Wars as well, but Q4 2019 and Q1 2020 could and should (and must) see huge growth for Star Wars again.