There’s a new post SDCC panel Star Wars interview up on YouTube, and in the video Hasbro designer Sam Smith (with Sarah Carroll) talks in detail what Hasbro’s goals and thoughts are behind the all new 5 inch Galaxy of Adventures line of figures. Hasbro also, in a roundabout way, admits that TVC is for adults and not for kids. Click through for all the relevant quotes! 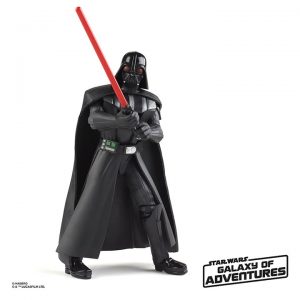 I will link to the video at the end of the article, but let me quote Sam Smith directly here, as he explains what Hasbro’s intentions are with the all new 5 inch super articulated Galaxy of Adventures line.

In terms of 5 inch it was really more of seeing as inch up versus inch down. So it was definitely something that was always intended to live independently, it’s a completely own stylization and it’s really more about being able to celebrate kind of the heritage and kind of the agnostic version of those characters.

…but ultimately, being able to really find a scale that was appropriate, that was really playable for kids. 3 3/4 is something that we’ve done for 40 years, it’s been successful for 40 years, and ultimately, you know, really being able to have that live on, but to a more dedicated fanbase, really letting it be celebrated through the Vintage Collection and more casually through things like Retro. But letting 5 inch really, kind of, be the home of playability for kids.

So, you know, it’s all about driving, sort of, what is the right scale that’s appropriate to kids and not necessarily thinking collector first, but still offer a great way of, you know, expanding into like an additional collection and letting them live on their own.

So what’s the takeaway here? Hasbro thinks kids want larger scale figures (they may be right) and that they don’t like 3.75 inch figures as much, that 5 inch figures have better playability. TVC has been recognized as someting that is for the dedicated fanbase (= adults) only, and in return it also says it doesn’t appeal to kids, especially as toys that you play with, at least Hasbro think so.

And it also confirms that Hasbro is trying not to target just collectors with their Star Wars toys, but also a new generation of young Star Wars fans. Hasbro thinks TVC doesn’t cut it for kids, when it comes to playability, that kids want larger scale figures and that stylized 5 inch figures with an action feature (was that action feature even discussed before?) will appeal to kids. Han Solo can draw his blaster, Vader has a lightsaber action move, Chewie can throw other figures with his arms and C-3PO loses a leg (I suppose you need to press a button on the back for that).

The interviewer also wanted to know more about the plans for GoA figures, but Hasbro didn’t reveal anything here.

Check out the interview linked below. Hasbro also talks about the Retro Collection (nothing to announce as of yet, but they’ve taken not it’s performed so well), Hyperreal (after the release of Luke in 2020, Hasbro will see if there is interest for the line and only then will they release more figures), the difficulties for marketing while working under an embargo (Sarah Carroll gave a noncomittal reply here), Hasbro wouldn’t even acknowledge that Mandalorian toys are planned for Triple Force Friday (they are!).

And Hasbro was also asked about their plans for the three years between movies. And Sam Smith said he would love to revisit previous movies, things that got left out in the first run. He didn’t specify any era, so that could mean all three trilogies. But it sounded as if he referred to the Disney era (he talked about the new entertainment just prior to his statement about revisiting things).

So, what are your thoughts now about the Galaxy of Adventures line? And the direction Hasbro is headed to? Do you think it will be a success? Leave your thoughts in the comments!

Click here to go to the 15 minute interview with Hasbro.