Prototypes for the figures were on display several times in the past, so this shouldn’t be a complete surprise. But it’s always good when SH Figuarts decides to actually produce a prototype. The Force Awakens Han Solo and The Last Jedi Luke Skywalker (Crait) both appear in a magazine scan. If you are not new to SHF you know the routine, first there’s the magazine scan, then follows the official announcement by SHF and you can usually pre-order the figures soon after. Both figures are expected to be released in December 2019. It remains to be seen if these two figures will be the only ones SHF release for The Rise of Skywalker or if SHF is also under embargo and will show off Rise of Skywalker figures later in the fall. 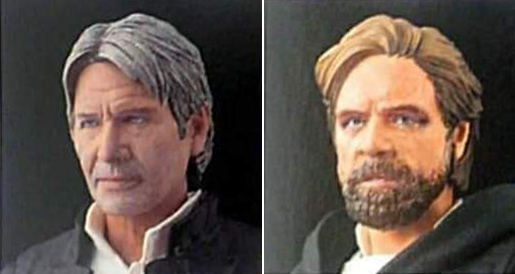 In my opinion the sculpt for Han is perfect, this IS Harrison Ford, Luke, maybe because of the beard (beard is notoriously difficult to sculpt) looks a little bit off perhaps. But the overall shape of the face seems to be correct. Also, why does SHF give Luke this bright hair as well, similar to the Hasbro TVC version? Is it possible that both Hasbro and SH Figuarts were given out of date reference material for Luke and that his appearance (hair color) changed later? This also means SHF will beat Hasbro to the punch and release their version of Crait Luke sooner. The TBS version is expected to be released in Q1 2020 or so.

Next Article: Robot Kingdom Has SDCC Exclusives Available to Pre-order!