Let's Talk About Nothing... I Mean SDCC

I hope all of you have recovered from yesterday’s fabulous helmet shaped Star Wars Hasbro Panel at SDCC. That was an impressive display of nothing, as far as new action figures are concerned. So while Disney most certainly prevented Hasbro from showing anything that will be released on Triple Force Friday, my idea was that we could still talk about something else. Why not talk about what other things were revealed at SDCC by companies not beholden to Disney, companies that are actually allowed to show stuff? So what is your favorite newly revealed toy? Click through for a bit more about Hasbro and then let’s talk toys!

Now, before we continue let’s briefly talk about whatever that was we were treated to yesterday.

You have to wonder if Hasbro’s Star Wars team appearance at SDCC did more harm than good. Why even come to san Diego when Disney won’t let you show anything at all that is related to this year’s all new Star Wars movie and Star Wars streaming show? Let’s not even talk about the fact that we all know how the characters in the new movie and show will look like and how nonsensical an embargo on toy reveals is. If the plan is to only reveal everything on Triple Force Friday then eBay will certainly provide us with the usual leaks days or weeks in advance, stealing all the thunder from whatever Disney is hoping to generate on TFF.

The question remains why Hasbro, in full knowledge that Disney, once more, will prevent them from showing anything related to the upcoming new entertainment, didn’t show us something based on other movies? One digital render of a Luke Skywalker Dagobah outfit Black Series figure doesn’t cut it.

Maybe Hasbro (or more likely Disney?) don’t want to steal the spotlight away from Triple Force Friday by talking about OT and PT based action figures, when the fourth quarter is supposed to be all about The Rise of Skywalker and The Mandalorian (not forgetting the video game here), so even though we KNOW several good things from the OT and PT are coming, Hasbro will only talk about them after TFF.

Still, it might have been a good choice not to have a panel then and to show off that one new helmet at the booth.

Anyway… so what is your favorite newly revealed toy/action figure so far? We usually never talk about other toylines here, but since Star Wars gave us more or less nothing, and talking about nothing is not as much fun, why not talk about what is fun… great toys?

Let me begin by posting this photo here: 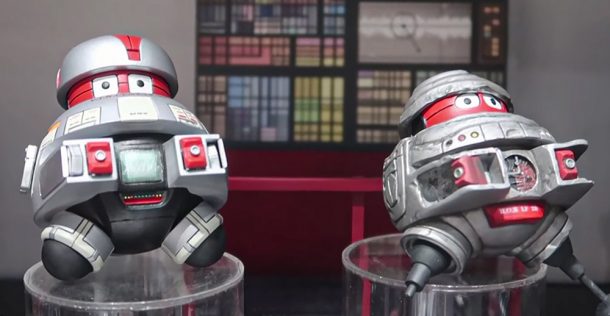 Diamond Select will actually release 1/12 scale figures from the movie Black Hole (which even fits the teaser image), they start with V.I.N.C.E.N.T., Bob and Max. I also really liked their Rocketeer action figure, also known as the grandfather of Zorri Bliss, who most certainly inherited granddaddy’s helmet…

I think I need the Black Hole figures, sure, it’s a weird movie that didn’t know if it wanted to be a movie for kids or the Haunted House version of 2001 A Space Odyssey, but I always liked the robots. And the newly revealed Rocketeer (aka Steampunk Boba Fett) action figure is also really nice. While the head doesn’t have photo real paint apps (DST needs to upgrade here) it’s not so bad, because he will wear his helmet anway. And as a bonus I can hopefully pose him with his granddaughter Zorri, once she gets released as well! His beige/brown jacket and pants outfit even fits right in with all the other Star Wars characters! Win win! 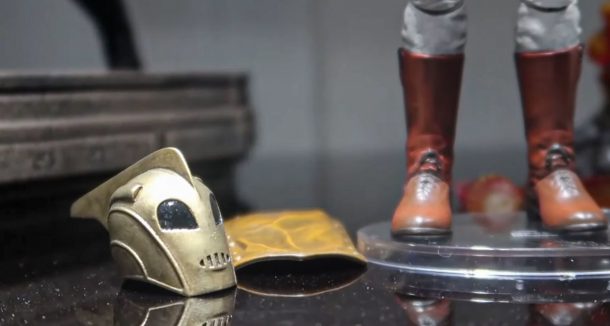 So what about you? What good things did you find out about, what do you want to get when it’s released? Post photos etc in the comments!

Next Article: The Cover For The New The Rise Of Skywalker Visual Dictionary