A Fun Look At What Could Have Been

While roaming the interwebs, Google picture search and subsequently finding some old articles from 2015 and 2016, I stumbled across a map for a proposed Star Wars Land theme park, made years ago, before Galaxy’s Edge was actually announced by Disney. Now, some of you may already know about all this, but maybe there are also some, like me, who see or hear about this for the very first time. So I would like to show you a fanmade map of a Star Wars Land theme park that never was. The question I have for you is: would that have been something you would have loved to go to? And do you think we might still eventually get a much larger Star Wars theme park in the future or has the time for that passed for good? Click through for the full picture and a few words about it! 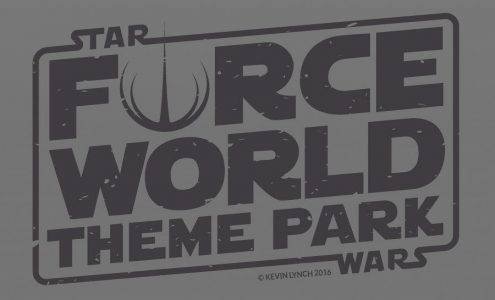 The following map is from Kevin Lynch, I tried to find some info about him, but was not successful, there are too many people with the same name.

However, the original posting for a somewhat older version of his concept for a Star Wars theme park seems to have originated on Facebook by “Amazing Star Wars”, here a somewhat older version of the map I am going to show was first posted on August 19th 2015, a few months before the release of The Force Awakens. Now, some of you may already know all about that, I didn’t and maybe a few others have never seen this theme park concept (fanmade, nothing by Disney!) either. And I think it’s fun to look at what might have been if Disney had made some different decisions. And the ultimate question is: would you have bought a ticket or annual pass for a Star Wars theme land like the one I am going to show you now? 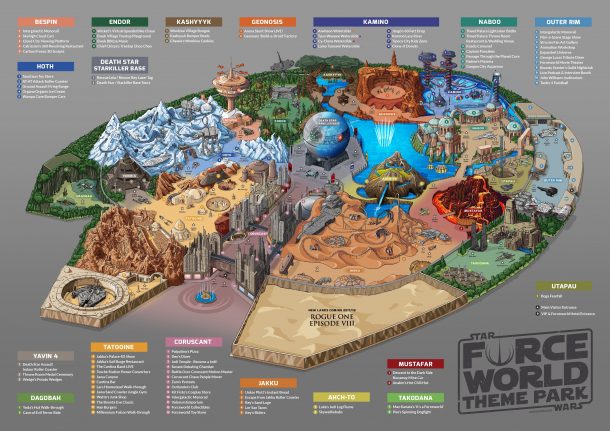 And this is the fan made concept for a Star Wars theme park, it’s an updated version of a slighly older first concept that didn’t include the new Disney Star Wars movies.

Now, as you can see, this fan made concept is much, much larger than Galaxy’s Edge, I would say this Star Wars Force World Theme Park is probably comparable to Disneyland Anaheim in size, at least.

If you look at the full version of the map you can see how Kevin Lynch came up with all kinds of attractions, rollercoaster rides, places to get some food etc. And what you also see is how each and every era / movie and even something like Rebels receives more or less equal treatment, you can experience the entirety of the Star Wars saga from beginning to (what is likely) the end. The only thing missing here is Solo and Episode IX, but an extension or slight alteration could certainly be made to accomodate for them.

Of course, an enormous Star Wars land like this would have involved enormous costs, construction time would have been many years. But maybe Disney could have finished building some sections first (maybe OT land first) only to open other sections of the park in following years. Universal did so for their Harry Potter theme park, Diagon Alley was added later.

Do you think an enormous Star Wars theme park like this could have been successful? Or would the costs involved with building it have been too high for Disney?

My very own, very personal feeling is, that I would have loved a theme park like this, where I can revisit actual places from the actual movies instead of a much more generic, made up place that certainly looks like Star Wars, but not like any Star Wars you know from the movies. Who wouldn’t have loved to visit the Lars Homestead, to visit Yoda on Dagobah, have lunch at Lando’s Cloud City restaurant, cuddle with some cannibalistic Ewoks on Endor or maybe roast some Porgs on Ahch-To while Luke milks some Thala sirens?
There is certainly a reason why the Wizarding World of Harry Potter has Hogwarts Castle, Diagon Alley with shops like Ollivander’s and places like The Three Broomsticks (an inn/restaurant from the books), there is even King’s Cross and the Hogwart’s Express train you can take. I am still not certain it was a good idea to make the Star Wars land we have now so generic.

I think most Star Wars fans, all Star Wars fans would have loved a land like shown in the map proposed by Kevin Lynch, a Star Wars Land that requires you to revisit it quite a few times to see it all. The only question is if there are enough Star Wars fans to justify an enormous investment like that.
A Star Wars Land like this would have certainly required construction in a location that gets many tourists from all over the world.

So, what are your thoughts? Do you love the concept? Do you think a theme park like this could have amortized its huge investment costs? Or would Disney have lost money with an enormous Star Wars theme park like this and Galaxy’s Edge is the much more sensible choice here?

Next Article: A Good Look At Some Episode IX Costumes