They Don't Make Brick And Mortar Like They Used To

I believe many of us have given up on physical brick and mortar to secure our Star Wars toys. Despite this, I am continually amazed at how worse the shelves become. For example, all of the TARGETs in my area have not seen a blessed The Vintage Collection figure beyond wave 17 and only have a single Jyn Erso and/or multiple Snokes hanging from the pegs. Walmart looks a tad better, but still, where are all of the new figures? It isn’t an exaggeration that no more than 2% of my Star Wars purchases are from retail stores. Thank goodness for Hasbro Pulse, Entertainment Earth, Empire Toys, Brian’s Toys,  Amazon and other online shops. I probably will never understand why retailers are unable to get the new waves into stores. Let’s be thankful that their exclusives mostly arrive without too many issues as of late (regardless of how they’re handled once they released). 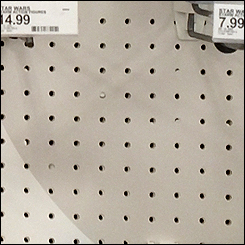 I’ve lost count how many months my local TARGET has looked like this now; it’s probably going on years.

Next Article: Crowds At Disneyland And Galaxy's Edge Lower Than Expected?