We usually never talk all that much about Funko Pop! here on JTA, it seems most of our readers collect other things, mostly Hasbro toys. Many wonder why anyone would ever want to buy these figures that focus more on cuteness than accurate sculpts. Funko Pop! are affordable collectibles only used for display purposes, these are not toys, you can do nothing with them.

But outside the hardcore Star Wars collecting bubble the world seems to be falling in love with the Funko Pop! figures.

To illustrate this here is a quick look at net sales figures for the past 4 years: 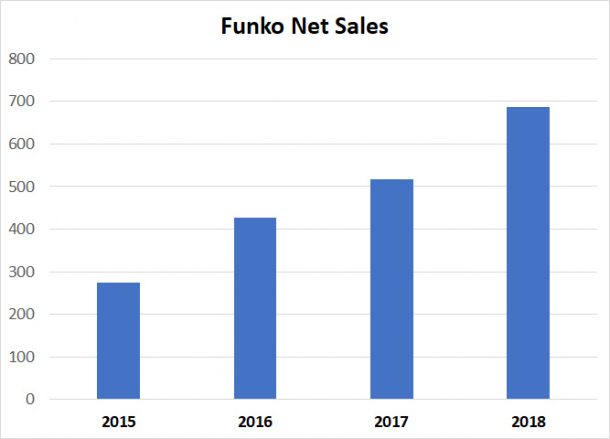 As you remember 2018 was not an easy year for American toy companies. Hasbro lost revenue in 2018. Funko however still grew. Funko may not have been as much affected by the demise of TRU than Hasbro, but Funko has been outgrowing most competitors for a long time now. 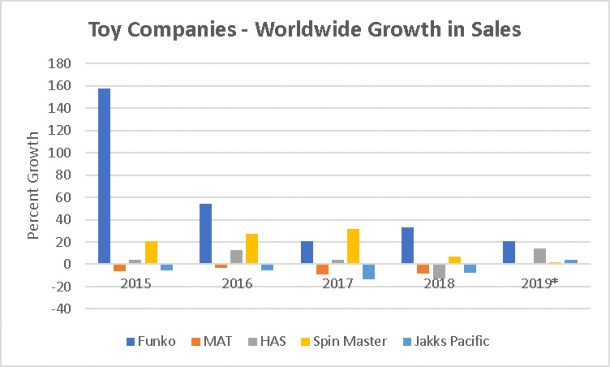 If you wonder who Spin Master is, they have the all new DC action figure license and will start selling them next year.

Funko has several things going for them. They are very quick to market, reasons for these are manifold. Their figures usually require only some basic tooling, likeness is not really a concern here, the stylized Funko Pop! figures don’t need it. So while a company like Hasbro has to create detailed digital sculpts, Funko only needs to sculpt a basic costume, a new hairpiece and things like beards and mustaches. Also, Funko is paying its manufacturers in China much faster than the competition. So the factories in China will always prefer Funko when it comes to manufacturing something, just because they will get their money from Funko much faster than from a company like Mattel.

Funko also has almost any conceivable license you could think of. They have almost any current and past pop culture phenomenon covered. Sometimes Funko Pop! are the only way to get any collectibles at all for a show or movie.

And of course Funko are relatively affordable, compared to articulated action figures.

So it is no big surprise that Funko’s toy shelf presence is increasing (shelf presence always depends on the season and other events, like current movies etc, so it’s always fluctuating). 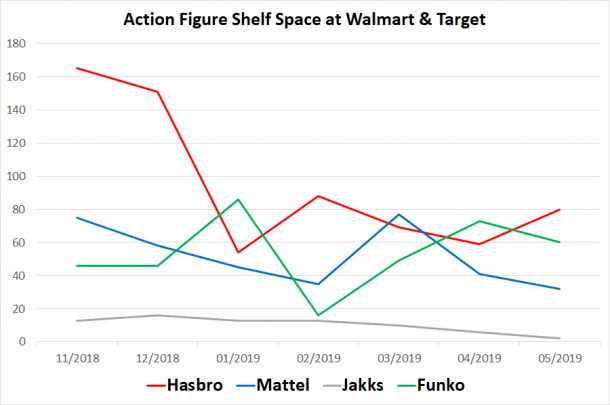 So while fans of super articulated action figures that are realistic representations of characters in movies may ignore Funko Pop! figures, fans of stylized vinyl figures that look cute are clearly becoming ever more important.

Funko Pop! are usually filed under the “action figure” category, which grew 10% in 2018 in the US, while the overall toy market shrunk 2%.

Market analysts are also very happy with Funko, they exceeded expectations with their numbers for Q1/2019. And while Hasbro will always be the much larger company, you have to remember that Hasbro produces a variety of products, board games, card games, dolls and action figures, among other things, while Funko primarily makes just one thing: action figures / vinyl figures.

Looking at these numbers for Funko it’s no surprise that Hasbro tried to revive Mighty Muggs. But Mighty Muggs fail to make an impression and it seems very few people are interested in them, they just buy Funko Pop! instead which have the added bonus of offering so many licenses. Funko has all the major movie releases in 2019 covered, for example.

So expect Funko to only become more present at toy shelves and more important. The vinyl figure boom doesn’t seem to be a short-lived fad. In fact, you could say that Funko Pop! collectors are probably a happy bunch, they have so many things to choose from, even more obscure pop culture characters can be collected as a Pop! figure, whereas Hasbro Star Wars collectors usually complain about the very shallow depth of current toylines.