We hope everyone’s week is off to a great start. There are less than 20 days left in the campaign, and we’re closing in on the $150,000 stretch goal, which unlocks Kim Simmons’ reverse-side re-creation of the Star Wars is Forever poster!

This week Derryl has more interviews scheduled with team members who worked on the TVC line and D. Martin has been working on finalizing the design of the book’s dust cover. As you’ll see below, the design is inspired by the original Star Wars poster illustrated by Howard Chaykin. We felt it was a fitting image to represent our first book. While we still need to complete the color correction, add in the rest of the effects, and finish tweaking the layout, we wanted to give you an in-progress look. We’re also giving you the opportunity to decide which version of Luke Skywalker appears on the cover.

Below are two options and the details on why we’re considering the two different Luke figures. Please leave a comment and let us know which version you prefer. (more information HERE).

Dust Cover Option 1
A less accurate representation of Luke Skywalker (as seen in the poster) due to the Stormtrooper belt, but a more dynamic pose that better matches the poster art. The figure is from The Vintage Collection.

Dust Cover Option 2
A more accurate representation of Luke Skywalker in his farm boy attire (as seen in the poster), but the figure is from the Episode IV Commemorative Blu-ray set, which came out in non-TVC packaging during the TVC-era in 2011. 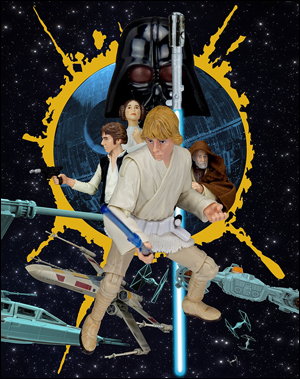 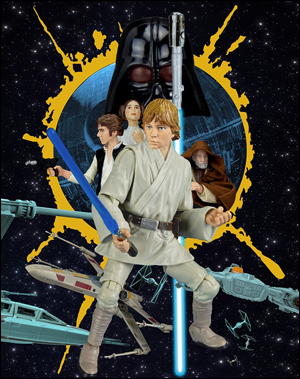