Via an article at Yahoo! Finance, Hasbro claims that the Chinese tariffs couldn’t come at a worse time. They also claim it would put American kids at risk, which seems like an overstatement.

“This could not come at a worse time for our industry. We, and the U.S. toy industry overall, are facing serious headwinds from the recent bankruptcies of two major toy retailers, K-Mart and Toys ‘R’ Us, which have already put an estimated 30,000 U.S. jobs at risk,” said Kathrin Belliveau a senior vice president at Hasbro, in comments submitted to USTR ahead of the hearing.”

But they said something quite differently a couple of months ago. (more….) 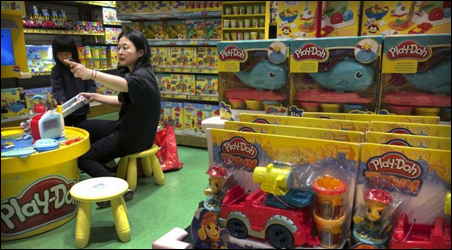 Hasbro’s CEO does not expect any serious tariffs to come from the United States’ trade dispute with China, he told CNBC’s Jim Cramer in a Monday interview.

“I, thus far, have heard, in working with the administration, that we are being a good actor and a good player and we expect that business will be fine coming out of China,” Brian Goldner, also the toymaker’s chairman, said on “Mad Money.” “Go[ing] forward, we don’t expect to see any major tariff situation.”

Next Article: TVC Boba Fett (VC09) From The Empire Strikes Back In Stock!