Be Careful What You Wish For?

Some collectors have been very unhappy with modern day 5 POA 3.75 inch Star Wars figures. They say that what used to be good enough 40 years ago doesn’t cut it anymore in the modern day and that 3.75 in figures should all be super articulated. So some collectors vehemently called for the death of the modern 5 POA 3.75 inch line. And now it seems they may get their wish. But in the process everyone loses and no one really wins anything. Why? Click through for a discussion! 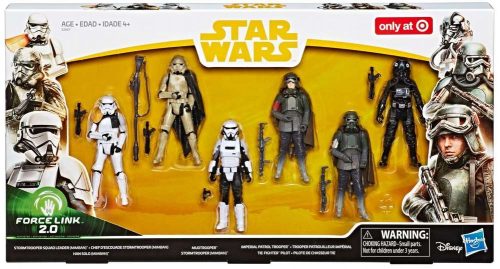 Here on JTA quite a few people have been asking for the cancellation of the 5 POA Star Wars action figure line. It’s easy to understand why a super articulated figure has many advantages over a 5 POA figure, you can pose it almost any way you like, which makes it more useful for display purposes. And especially poses with weapons can be more lifelike and less stiff and awkward.

But the ultimate rationale behind wishing for the death of 5 POA seems to be that collectors hope that whatever budget Hasbro has for 5 POA will instead go to TVC, so that TVC would get more figures.

I do believe that this rationale is very flawed. Any toyline has its own margins, its own production costs its own projected sales numbers and therefore the cancellation of one thing will not result in getting more of another thing. Or did the cancellation of Star Wars Command result in more action figures of any scale? Or to use an analogy, if a carmaker chooses to discontinue a low budget model, will they make more luxury sedans instead or come up with something else to fill the niche left behind by the discontinued model?

Now, to make that clear, we don’t know anything really, nothing official is known. Maybe Hasbro is working on some 3.75 inch 5 POA figures for The Rise of Skywalker and yet somehow no one got wind of that.

But if the rumors turn out to be true, and that there will be no more 3.75 inch 5 POA figures and instead an all new 5 inch 5 POA line will see the light of day, the question is… what has been accomplished? Especially for 3.75 inch collectors?

Now I don’t think Hasbro bases their decisions entirely on what people on fansites comment, but in the unlikely event the various demands for the cancellation of the 5 POA line did have an effect – what good did it do?

Maybe you think “good riddance, I don’t want sequel trilogy characters anyway”… but ask yourself this: in what way would the potential cancellation of the 5 POA 3.75 inch line result in more OT figures for TVC?
To me it seems some collectors think Hasbro as a global toy company doesn’t have the manpower or resources to handle multiple toylines at once. I think nothing could be further from the truth. That doesn’t address distribution issues or case assortments, these issues haunt basically any Star Wars action figure line, but it has little to do with product development and actual production of figures. Hasbro is perfectly capable of producing several scales and toylines at once. Why distribution to retailers is such a mess is another topic and the cancellation of any one line will not change that.

The ultimate question is: why ask for the cancellation of anything at all? And what is the ultimate purpose here? It’s really easy to avoid things you don’t like: don’t buy them. Let the market sort things out. If something sells, it will keep getting made. If it doesn’t sell it will be discontinued. The 6 inch Centerpiece line was discontinued, so was Star Wars Command, none of which resulted in more figures for any of the other toylines though. The budget for Centerpiece didn’t go to the Black Series. The number of all new TBS figures is more or less constant. Hasbro will simply come up with something else instead. And it may be that instead of 3.75 inch basic figures, they decided it’s time to go 5 inch.

In the end I think asking for the cancellation of a toyline is never productive, nothing good comes from it, you alienate those who do like said toyline and even if you do get your wish and something is cancelled, you gain nothing from it.

Anyway: I think it’s time collectors stop asking for the cancellation of something they don’t like. You can always vote with your wallet. And before anyone asks for the cancellation of a potential 5 POA 5 inch Galaxy of Adventures line – remember it will most likely not get you more of what you want. So if a potential 5 POA 5 inch Galaxy of Adventures line finds its fans (we have yet to see a figure, will they have photoreal faces? will paint apps be very basic only?) don’t alienate them by telling them the thing they like needs to die. It will accomplish exactly nothing.

What are your thoughts here? There is certainly a fine line between providing important feedback and being just negative. In my opinion only fans of a toyline provide valuable feedback, e.g. don’t ask me about my opinion on WWE action figures, because I just don’t like wrestling or ever buy the figures. Now, of course it’s also important for Hasbro to know how many people would actually buy something, so telling them you will not buy this or that is certainly important information. However, this is usually sorted out all by itself, fans either buy something or they don’t. Sales figures will tell Hasbro what needs to be cancelled. And Hasbro will certainly cancel something that doesn’t sell. With the Centerpiece line one of the last things that was “given a rest”, according to an official statement by Hasbro.
The Centerpiece line is actually a good example here… because the basic idea, giving fans a diorama piece with a figure, is a good one. However, execution was flawed because the figures were statues, not articulated. And price was somewhat high. So providing constructive feedback, e.g. make the figures super articulated, lower prices somewhat, is helpful. Saying Centerpiece needs to get cancelled in the hope of getting more all new TBS figures however is not helpful at all, since the basic premise is flawed.

And remember: just because something does get cancelled doesn’t mean you will get more of what you want. In the end everyone who collects Star Wars figures of any scale, shape or form is a Star Wars fan and Star Wars collector, we all share the love for Star Wars. Why alienate them by telling them the thing they like is terrible and needs to die. Vote with your wallet if you like or dislike something, instead of constantly asking for its cancellation.

A reminder: a few 5 POA fans have come forward here on JTA occasionally and confessed they felt they were not really welcome and therefore decided not to post something. I don’t think this is necessary. We all love the same thing. We love to collect. Fans shouldn’t tell other fans that what they like is, according to them at least, rubbish. It only creates rifts and divides where none need be.

So how do you feel about the potential demise of the modern 3.75 in 5 POA line? Do you hope Hasbro will still make a few figures in that scale for TROS?