YouTube Channel Star Wars Theory received the alleged plot synopsis for Episode IX – The Rise of Skywalker. Now, we cannot say of course if this leak is legit or fake, but the synopsis is consistent with previous leaks, which still means nothing, but at least it sounds plausible. By now you know the drill: if you want to learn more, then click through, if you want to know nothing, well, I advise you to stay away from this article or else you will be spoiled. So let’s discuss the spoiler after the jump! 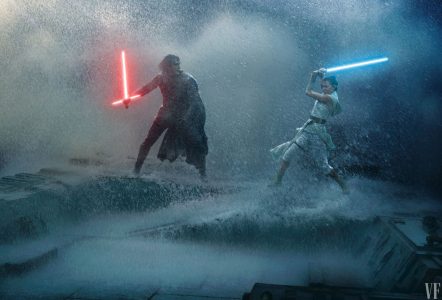 According to Star Wars Theory the plot synopsis comes from a company that does surveys for movies, for the surveys they get additional info from production companies and Lucasfilm provided them with a plot synopsis. The person who (apparently) works for that company and provides YouTubers with spoilers was supposedly very correct with his Avengers Endgame spoilers. Which means the following info might be correct.

So what is the alleged plot of The Rise of Skywalker?

The movie takes place one year after The Last Jedi. Kylo Ren is the Supreme Leader and his Knights of Ren have returned from their search for a dark side artifact: the remaining complete armor of Darth Vader. Kylo Ren is seeking a new path to dominate the galaxy. Meanwhile the Resistance is in hiding, traveling from planet to planet. Poe is the new military leader with Finn and Rose serving as his commanders. Leia meanwhile is on a mission to recruit allies in the Outer Rim. The Resistance launches one last-ditch effort to topple the First Order.

But then the Force spirit of Emperor Palpatine rises from the shadows, where he has been pulling the strings all along. And he then inhabits the body of a young dark side apprentice of Kylo. Rey, who has been on a mission to translate the ancient Jedi texts to learn the ultimate truth about her lineage, realizes that her Force connection with Kylo is growing stronger and the two finally team up to eliminate the Emperor once and for all. But as the Resistance makes its way to Yavin and the wreckage of the Death Star, the Emperor’s powers might be too great as he attempts to spread the dark side in a climatctic battle for the fate of the Force and entire galaxy.

This synopsis aligns with previous spoilers. It was rumored a long time ago that Palpatine may inhabit, transfer his essence to a Knight of Ren (it was rumored to be Matt Smith, but we don’t know if he’s actually in the movie or not), it was also rumored that Kylo and Ren team up to defeat the Emperor who has been pulling the strings all the time, making Snoke either a puppet or someone Palpatine also inhabited.

The ultimate question is… is it any good? First: it seems this plot synopsis partly contradicts some spoilers which caused for much concnern, e.g. that the Emperor will only be a hologram in the movie.

In my opinion the basic story could give us a satisfying finale. Of course many details are still unknown. What about Luke? What is it that “rises”? One of the controversial leaks alleges that C-3PO will be somehow hooked up to a Death Star Antenna to broadcast a speech Luke gave throughout the galaxy (I find that unlikely). The same leak also said Rey would lead the Resistance on a wild goose chase through the galaxy, with no real purpose. This new plot synopsis does contradict that though, which says Rey is on a mission of her own, to find out more about her lineage and to translate the ancient Jedi texts.

It seems Rey’s parentage is yet not fully determined, maybe Rey suspects something and wants to find out if the Force had a hand in her creation? Maybe the Midi-Chlorians made her (similar to Anakin)?

What else: the Resistance must be very desperate when a mechanic with zero combat training becomes a military commander. But this info also supports previous leaks that said Rose would have a somewhat higher position within the Resistance.

And: so Rey and the others go to Yavin after all, and not Endor. Which is somewhat odd, since the Emperor died on the Death Star II around Endor. But there’s certainly a reason for going to the original Death Star. In Legends the first Jedi temple was on Yavin, maybe that also plays a role here.

What do you make of all this? Do you like the alleged plot of The Rise of Skywalker (with many, many details still missing)? And as always take all of this with grains of salt, it could all be fake. All we can say is that this synopsis supports other leaks.

Next Article: The End Result of Poor Distribution: Walmart Edition