The Results Of The Star Wars Fan Survey Are In!

You will certainly remember the post from a few weeks ago where we asked you to participate in a Star Wars fan survey. Social scientist Mark H. White wanted to find out more about Star Wars fandom, how we tick, so to speak. If you left your email address in the survey Mark will already have contacted you, he released the results late last night. His analysis of the results spreads over five parts, each part dealing with a different topic, ranging from the general make-up and demographics of fandom to sexism. And while most of the results will probably not really be a surprise to many, some results may ruffle some feathers here and there. So it’s time to look at Mark’s results and to discuss them. Click through for  more! 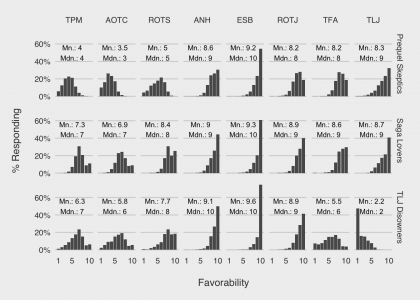 What Star Wars fans think of the movies

So what are the results of Mark’s survey?

More than 5,300 fans took the survey. About 200 obvious trolls were removed from the results (people giving obvious troll or nonsense replies), which left about 5,100 results.

Now, the survey is not necessarily representative, instead of picking a representative sample of fans, Mark relied on snowball sampling, by asking websites like JTA (17% of respondents came from JTA) or twitter users like Star Wars author Claudia Gray for help, this resulted in many fans taking the survey, but not necessarily in a representative sample of fandom. It’s obvious that only people who frequent fansites and follow certain people on Twitter knew about the poll, that leaves out most of the fans who frequent different sites or don’t use Twitter.

That being said, the demographics of the people who did take the survey is as follows:

The vast majority of fans reports as “liberal”(ranging from somewhat to very liberal), more than 60%. About 18% or so is politically moderate and the rest reports as conservative.

The percentage of male and female fans, more or less, aligns with data from the MPAA, which states that about 58-60% of Star Wars moviegoers are men and 42%-40% are female. It has to said here, however, that Claudia Gray asked specifically for women to take the survey on her Twitter. I learned from Mike that the vast majority of respondents from JTA were male. But overall, about 60% male fans seems to be very plausible, given other sources we have.

However, white people are vastly overrepresented in the survey. Because of the nature of the survey and the fact it may not be all that much representative of fandom as a whole, we cannot say with absolute certainty that fandom is that white. Among moviegoers who saw The Last Jedi only 57% were white, for example.

Mark goes on and identifies three main clusters of fans, Prequel Skeptics, Saga Lovers and TLJ Disowners, the labels should be self-explanatory. What Mark didn’t find is a group of OT Purists, even though they most certainly exist. But there seem to be very few OT Purists out there.

Unfortunately, Mark didn’t quantify things here, so he didn’t say how many of the fans are TLJ Disowners, Saga Lovers and Prequel Skeptics. What he did find is that TLJ Disowners are predominantly male (86%) and that there is a small spike in the age distribution among TLJ Disowners for fans in their 40s. However, the racial composition of the three clusters is basically the same.

Then the results move on to the part that will probably be most discussed: the influence of sexism.

Mark also found there is a correlation between sexist views and how favorable each trilogy is viewed, with sexism negatively correlated with sequel trilogy favorability (i.e. the more sexist you are the more likely it is you may dislike the sequel trilogy). The same applies to the three major female characters in The Last Jedi, Rey, Holdo and Rose, as the following chart illustrates:

Mark arrives at the conclusion that at least some of the The Last Jedi backlash was motivated by sexism, but he also emphasizes that some criticism is also in good faith and that disliking The Last Jedi and sexist views are not a 1:1 relationship as there is much variation in each group (see the plot further above which illustrates this). Mark finally states that “Given their social and political attitudes, some people might have been predisposed to hate it (TLJ)—regardless of the film’s quality—due to main female characters demonstrating skill, bravery, and leadership.”

Now, I suppose that some fans may take offense here. I think it is unfortunate that Mark did not quantify anything here. How many were predisposed to hate TLJ because the female main characters demonstrated skill, bravery and leadership?

In my opinion this 3rd part of the survey analysis has some inherent weaknesses.

I think any detailed analysis of sexism in the fandom should include all female characters with male characters also being examined here. Without having any data I would venture a guess and say that Luke is much less popular among fans (at least TLJ Disowners) in the sequels than in the OT. The question now is why fans feel that way? The male dominated group of TLJ Disowners certainly doesn’t have any negative sexist views about Luke. I would argue and say that only very few people are actually sexist, while the overwhelming majority of fans takes issue with the writing/script by Rian Johnson and JJ Abrams. Maybe Mark can quantify things here and give us percentages. Ideal would be a follow up survey that examines this in much greater detail, with all characters across all movies and major tv shows.

Also, I would suppose that most of the people who, according to Mark, were predisposed to hate TLJ because of women demonstrating skill, bravery and leadership would absolutely like Leia who demonstrated just the same in the OT. Actually, the Poe/Holdo dynamic in TLJ is not that much unlike the dynamic between Leia and Han in ANH (at least in the beginning) and for much of ESB, i.e. confrontational, but why is one character more or less universally loved and the other not so much? How can sexism be a factor here when two women have more or less the same characteristics? Or do TLJ Disowners have less favorable views of Leia as well? It would be interesting to know more here.

In my opinion a survey or study about sexism should also gauge what people think being a feminist and being “pc” actually means in 2019. Mark is referring to some works here that are quite old and much has changed in the meantime. For example, what would the results look like if the survey included a question like this one “Do you agree that men and women should have equal rights and opportunities?” (which is one of the core tenets of feminism), my hunch is that the results here would be very much different from asking whether or not “feminists make unreasonable demands”, because what feminism is and stands for has undergone huge changes in recent decades and even the past few years. At least in the eye of the public with ever more extreme people on both sides of the spectrum dominating the debate. Some may interpret it in a more classical manner, others (perhaps predominantly conservative) may think of the very extreme ends of the spectrum here when they think about modern day feminists.

Mark goes on and finds that most Star Wars fans were very young when they saw their first Star Wars movie. 90% were younger than 13. And the generation that grew up with either the OT or the prequels has a more favorable view of the trilogy they grew up with than other groups. None of which should surprise anyone really.

What else is of note: the survey found what has been observed all across the internet: TLJ is a divisive movie. It has a high number of very low scores and a high number of very high scores, you can see this on IMDB, Rotten Tomatoes and any other site where users can rate the movie. And Mark’s plot about movie favorability which I posted in the article teaser illustrates that very clearly.

Mark posted all his results on his blog, there is much more to read than I touched upon here. You can find the five part analysis here:

It’s well worth a read!

So, what you you take away from this survey? Do some of the results surprise you? Do you disagree with some of the findings, would you like a follow up survey that examines some things in greater detail? Did it confirm what you observe on fansites and elsewhere? Leave your thoughts in the comments!

And a friendly reminder, the comments for the original article about the survey got somewhat out of hand. This will not be tolerated here. So don’t post your exact same opinion twenty times (the all new Darth Sakul rule 😉 ) or come up with crazy conspiracy theories, and please refrain from attacking Mark, he merely gathered data provided by us fans and analysed it. His analysis is up for debate here, nothing else!
Also, one final remark: Mark talks a lot about correlation in his analysis, I would like to remind you that correlation is NOT equal to causation, being “sexist” (according to the definition in the survey) and disliking TLJ doesn’t prove you dislike TLJ because you’re sexist. Maybe being “sexist” means you are also generally more critical when it comes to movie scripts and writing in general and that someone who is a liberal progressive will cherish and love female characters in movies no matter what, and is willing to overlook issues with the script, just because they are females. As I said, in my opinion the topic warrants further examination with much greater detail.

Previous Article: Experience The Smuggler's Run Ride In This Video

Next Article: Experience Galaxy's Edge In These Walkthrough Videos!