Now this is certainly somewhat odd. Reworked versions of a Return of the Jedi Darth Vader and A New Hope Stormtrooper will soon be put on pre-order by SH Figuarts. Magazine scans of the two figures have appeared in the wild. This takes SH Figuarts full circle, since these two were the first to be released in the SHF Star Wars line. However, both original figures had serious shortcomings. The original ROTJ Darth Vader was too short, had a very stylized sculpt and a tiny head. Even worse, the unmasked Vader head only came with the Return of the Jedi Luke. It seems the new Vader is based on the A New Hope Vader which corrected some of the mistakes of the previous Vader but still had some issues, like a somewhat inaccurate helmet sculpt and awkward cape. It remains to be seen if SHF reworked the helmet sculpt once more for this release. The feature to remove the helmet dome is certainly all new. The unmasked head certainly looks gorgeous and it might be something you’d want to get if you want to replace Sad Puppy Vader from the Black Series. The Stormtrooper seems to be based on the Rogue One sculpt which is still inaccurate, the crotch piece is much too large (or the belt sits too high). But you get superior articulation in return. And the helmet sculpt has been very much improved compared with the original Stormtrooper. Anyway, it’s still a weird choice to retool / revise previous figures instead of releasing any of the other all new prototypes. Like the Empire Strikes Back Pilot Luke or Crait Luke, however the latter may still be announced soon, see the previous article! Are you interested in an SHF ROTJ Vader and ANH Stormtrooper at all? Or are these figures an easy pass? Let us know in the comments!

UPDATE: Official promo photos added! Click through to see them! 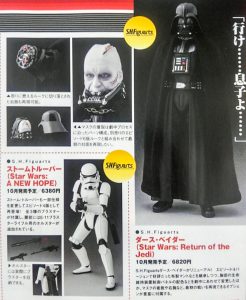 Bandai has released official photos for the two figures! Here are some of them.

First up a closeup of Vader’s helmet. It seems SHF wants to make a point here and reassure collectors that this time they have got it righ. But have they? Take a look! 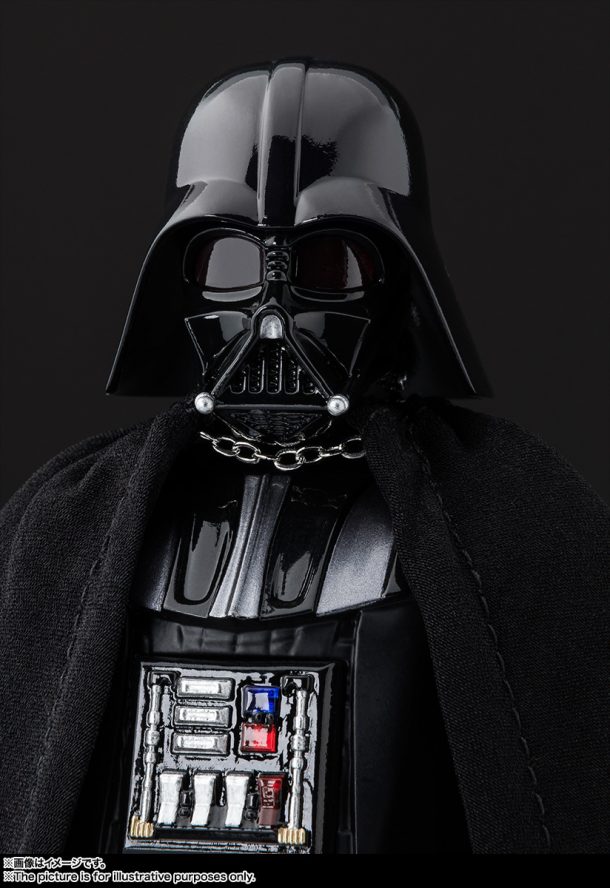 In my opinion this is a very good headsculpt. Easily the best SHF has done so far. That helmet looks excellent. Also: it seems the red and blue switches on the chestbox are translucent? That’s nice. The metal chain is inaccurate and unneeded though.

A good look at Vader’s unmasked head is next. 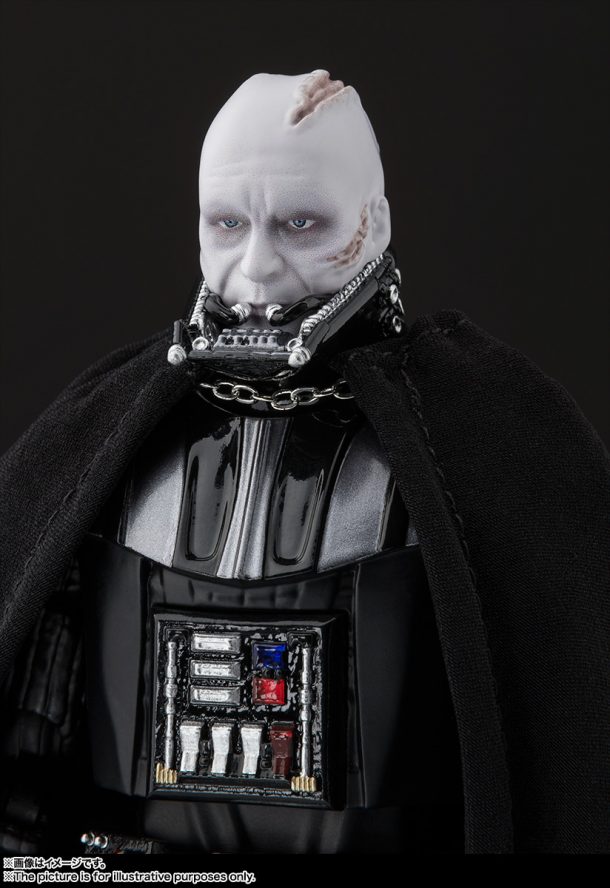 Vader next to some Stormtroopers: 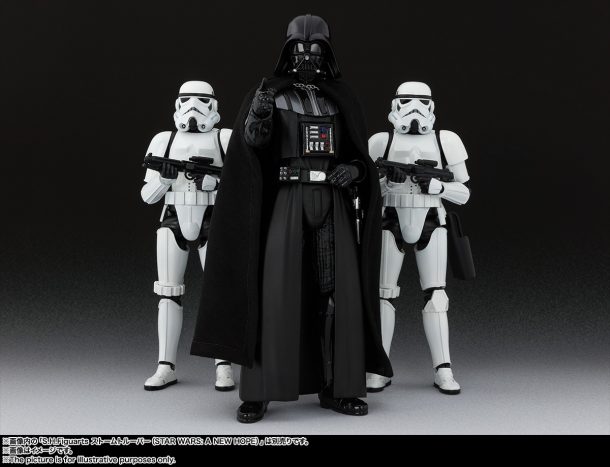 And here we see that the cape is much too short. Perhaps SHF will correct that error until the figure is released, this cape is actually comically short, which is a huge disappointment. Everyone knows that Vaders cape reaches to the ground. How could SHF miss that detail? 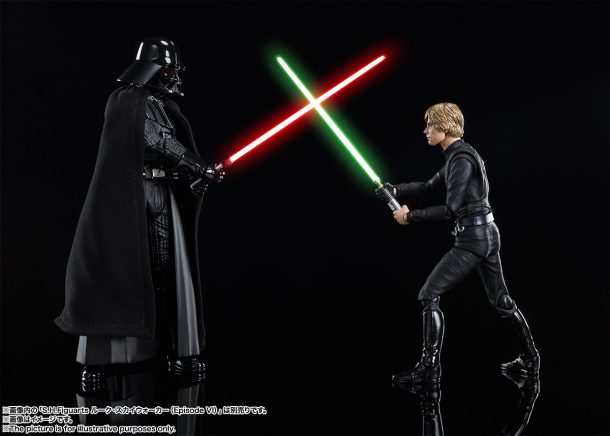 That cape really is much too short. That distracts from the overall aesthetics a lot. I hope someone over at Bandai listens to fan feedback. What you also see here is another detail which is not 100% screen accurate (you need to click for the large version to see it): Vader’s lenses have a slight red tint, he didn’t have that anymore in Return of the Jedi. But overall the helmet does look a lot better than anything we’ve seen from SHF before. It looks pretty good in profile view, it appears to be less snouty than the ANH version.

So, after seeing these photos the new Darth Vader figure is once more a mixed bag. While the helmet does look a lot better than any SHF Vader figure before, SHF gave the figure red tinted eyes, which is definitely not correct. Also, the cape is really a huge failure, why is it so short?

And now the Stormtrooper. Here’s a photo of him in action: 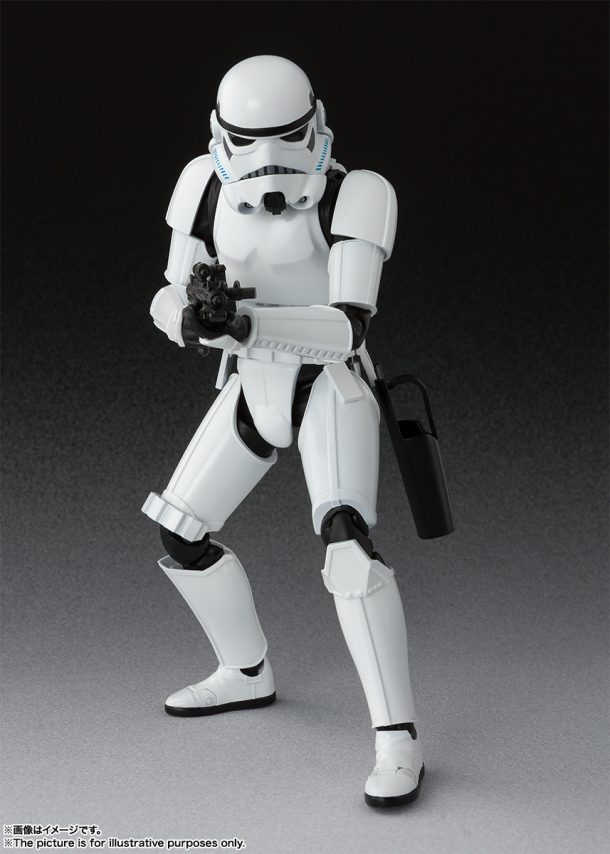 The cod piece is still too large / the belt sits too high. But I suppose SHF did that to greatly improve leg articulation. That helmet looks really good, though. However, accuracy experts will note that the A New Hope Stormtrooper has black ankles, which he shouldn’t have. A white ball joint would do the trick here.

And to illustrate the great articulation range, a kneeling pose: 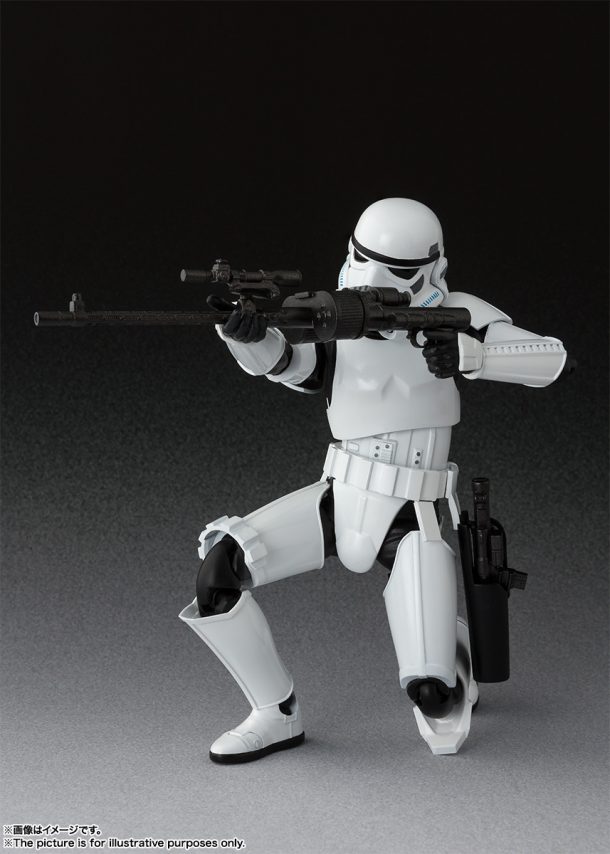 The SHF Stormtrooper can not only easily kneel down, he can also look down the sights of his blaster rifle. While the SHF Stormtroopers are always somewhat more stylized or slightly inaccurate, they also offer you premium articulation.

So, after seeing the official high resolution photos I can say that, despite the errors, I am definitely interested in the ROTJ Vader, he is a marked improvement on the Hasbro version, which is just plain bad. However, I will probably not preorder Vader and wait for the release date. I want to know if SHF fixed the cape. Also: 6 inch collectors still don’t have a definitive Vader, the Mafex RO version is inaccurate, the 40 Anniversary TBS Vader has a cape that uses too much cloth and he lacks many useful extra hands Vader needs, and the upcoming ROTJ SHF Vader instead has a cape that is comically short, and he’s not 100% screen accurate either with his red tinted eye lenses.

The Stormtrooper seems to have a great helmet sculpt and it looks to be a fun figure you can get into many action poses. But is it enough to beat the model kit? Well, you don’t need to assemble the SHF version and apply decals. I think I might get one.