Bandai has a survey up on their website about the recently released Count Dooku figure. The survey is in Japanese, but using the translate function in Google Chrome you can still take it if you feel like it. However the survey is not really what I want to talk about. What I do want to talk about is the part of the survey in which Bandai wants to know what SH Figuarts Star Wars figures you already own. The recently announced Revenge of the Sith Yoda figure is on the list. But so is the yet unannounced Crait version of Luke Skywalker. The figure was on display in Japan, so we know it exists. However, nothing has been announced yet. But with Luke on the list the question is if SH Figuarts will announce him soon. SH Figuarts should certainly try to beat Hasbro to the punch and release their Crait Luke before Hasbro if they want to make more money. Chances are collectors outside Japan would not order the SHF version if Hasbro releases Luke first. Would you get the SHF version of Crait Luke? Or will you wait for Hasbro’s Black Series version? 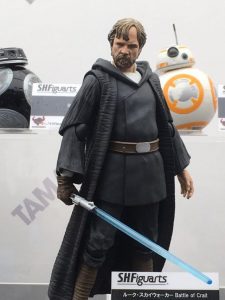