The Most Popular Main Trilogy Star Wars Movie In The USA Is...

YouGov released a brand new survey in late April. For this representative survey 27,171 US adults were questioned on April 29th. YouGov wanted to know what the most favorite Star Wars movie from the three trilogies is (so Rogue One and Solo are missing) And while you may already guess what the most popular movie among adults is, it is still something different if you ask a representative sample of all US adults or just hardcore fans. So click through for the results! 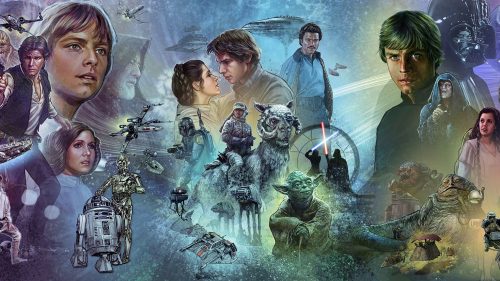 Consider this a spoiler

So, what are the most favorite main trilogy Star Wars movies in the US? 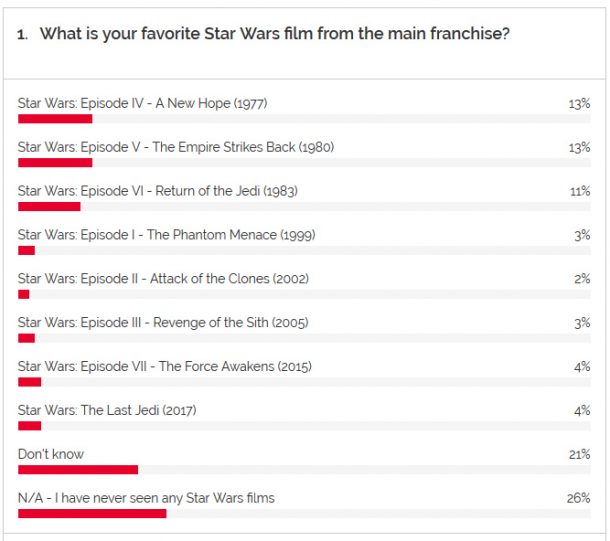 There is not one, but two winners in this survey, both A New Hope and Empire Strikes Back are the most popular main trilogy movies in the US.

What else can we see: 74% of the adult population has seen a Star Wars movie. An impressive number. 21% however don’t have a favorite movie, which probably means they are only very casual fans, if at all.

The results are not that much different from a movie poll here on JTA from 2018, but here fans could rate all the movies, not just name their most favorite one.

Now, before you jump to conclusions, the question was what “your favorite movie” is. And someone who has Empire Strikes Back or A New Hope as their most favorite movie can still like all the other movies as well.

So even if most US adults like one of the OT movies the best, it doesn’t mean they dislike or hate the other movies/trilogies. But it’s certainly important to see that the OT is still the most favorite series by far. This should tell Disney that mining the OT time period some more in future movies and shows is probably a good idea, even if Solo failed. The two live action shows on Disney+ are both set near the OT time period for that very reason, most likely. It remains to be seen if any new Star Wars movie will ever become the most favorite movie. Since people tend to be nostalgic and events/movies/music from our childhood are usually remembered much more fondly, this will probably not happen any time soon. It would be interesting to see what people aged below 18 think about the movies.

Next Article: Packages From Walmart.com Arriving In Great Condition!