SH Figuarts will soon announce an all new Star Wars action figure. A magazine scan of the brand new Return of the Jedi Boba Fett figure (a prototype was seen before) is making the rounds. So expect pre-orders to open very soon! Hasbro has yet to make a ROTJ Black Series Boba Fett, but MAFEX released both an Empire Strikes Back and ROTJ version a few years ago and it will be difficult to compete with the MAFEX Boba Fett who just looks like a miniature human with very crisp details and perfect proportions. However, MAFEX figures are also very fragile and you have to be very gentle with them. SH Figuarts can certainly tolerate more abuse, also the SHF figure will probably be somewhat less expensive than the MAFEX version. ROTJ Boba Fett is scheduled for a September 2019 release, he will be a regular release. I will post an update as soon as pre-orders open.

Update: see official photos on the Tamashii website! The figure goes on pre-order on April 26th! 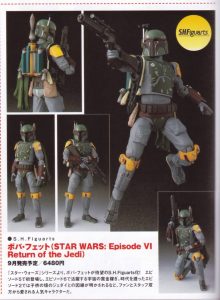 Previous Article: The Retro Collection Has Wonderful Potential! Who Will Be Next In The Line?