The MPAA Report 2018 And The Last Jedi

The MPAA released its annual report a short while ago. Unfortunately, since Solo failed to make the top five highest grossing movies of 2018, the MPAA report doesn’t offer a more detailed breakdown of the movie’s demographics, something we still had for The Last Jedi. However, the MPAA report has also a segment on home media performance. And here we can see how well The Last Jedi and Solo did. So click through for more info! 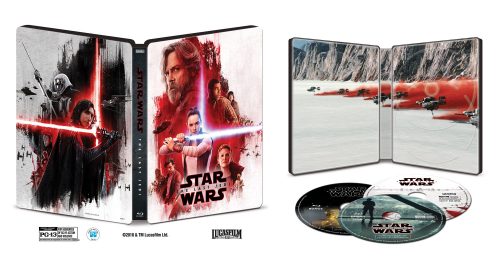 The MPAA report uses website The Numbers for the disc sales statistic, and Comscore for the rental and digital numbers, which are otherwise impossible to come by. So seeing how The Last Jedi performed on the digital market will be of great interest.

Combined home video sales in the US:

Now before you say anything further, The Last Jedi, according to the latest update on The Numbers, did sell the most Blu-Ray discs, however both Black Panther and Greatest Showman sold more DVDs, which is why both of these movies are ahead of The Last Jedi. Solo, as a Star Wars movie, is a financial disappointment and its home media sales, while decent, are nothing but disappointing too. Back in 2017 Rogue One was also in 3rd place in the combined video sales statistics, so for The Last Jedi to make 3rd place is not too unusual.
Star Wars movies sell much better on Blu-Ray than DVD. I suppose the fans prefer the superior picture quality and they do have the money for a decent home video system.

What is interesting though, is that The Last Jedi outperformed the Avengers movie. However, The Last Jedi was released in March on home media, and the Avengers in August. So it’s very likely that the Avengers may have done quite well during the holiday season. Getting the sales statistics for home media releases is somewhat complicated (no actual sales are reported, only fractions and once every quarter an overall number for the total market is released, The Numbers uses this to calculate actual disc sales), which results in sales numbers lagging behind several weeks or even months. So it may very well be that an updated list may see Avengers higher up on the list.

Next up are the top dvd/blu-ray rentals in the US, and something odd is going on here. Star Wars is nowhere to be found. I checked, and The Last Jedi is definitely available for rent on Netflix or from Redbox. But apparently Star Wars fans don’t rent the movie, they rather buy it?

Top DVD/Blu-Ray rentals in the US:

And now we enter the digital realm, the MPAA also offers the very insightful numbers for electronic (i.e. online) sell through and here things are decidedly different from the physical home media sales!

Top Electronic Sell Through movies in the US (i.e. buying your digital copy of a movie on iTunes or Amazon etc.):

Next up are digital rentals. And once more, even though The Last Jedi is available for rent on Amazon and other sites – no Star Wars movie made the top list for digital video rentals in the US.

Top digital rentals in the US:

So after looking at all these lists what can we say? Apparently the target demographic for Star Wars movies preferred physical home media over buying a digital copy in 2018 and apparently Star Wars fans buy the movies and don’t rent them. You could also say that more casual movie fans simply don’t rent Star Wars movies.

Now, of course there is one very important statistics missing: streaming numbers. These are secret. Netflix does not disclose their numbers, no other streaming service does. So we cannot say how The Last Jedi or Solo performed on the various streaming platforms.

Nevertheless, the somewhat lackluster performance of The Last Jedi on the electronic sell through market should be reason for some concern, as you can see when you look at the following numbers.

US Home Entertainment Consumer Spending in 2018:

It also means that overall The Last Jedi was ultimately outperformed by various movies on the home media market. While it may have made good money by selling physical discs, digital sales are not what they should be for a number 1 box office hit. You may argue that Star Wars fans are also very often collectors and that owning a physical copy of the movie is more satisfying than being able to watch the movie over the internet or to download a digital copy onto your disk.

However, there is one caveat, the numbers for digital also include subscription fees for streaming services, on top of the the electronic sell through numbers. And streaming is this huge black box that we know almost nothing about. We know how many subscribers some of the services have, Netflix, for example, but how much money does Disney make with streaming on Netflix and how many times were The Last Jedi or Solo watched? No one knows. All we do know is that digital sales for The Last Jedi are somewhat underwhelming, considering it was the number 1 movie at the box office. It was outperformed here by movies that made less than half at the domestic box office. Maybe the demographic for these movies simply likes online a lot more than Star Wars fans.

Solo, however, more or less held its ground. It’s in 13th place both on the physical and digital sales charts. It is still somewhat disappointing though, because it was the number 10 movie at the box office.

So doing well on the physical home media market is nice, and The Last Jedi did really well here, but it’s also a market that is inexorably marching into oblivion and it won’t take that long until Blu-Ray movies are probably the vinyl of the movie industry. Bought by dedicated fans that love to own physical copies, that want to have the art work or some extra bonus like a statue or figure at home. But the vast majority will buy, rent and stream movies online.

So it only makes sense for Disney to launch Disney+. The digital market is growing rapidly. Now they only have to convince Star Wars fans that not owning a physical copy is ok and that streaming in 4K is really nice too.

And to finish this aricle, statistics from the MPAA report:

Star Wars is by far the franchise with the highest percentage of white moviegoers.

So it’s not just the Star Wars fandom that is mostly male, the MCU has apparently a similar appeal to men.
The survey average for gender share in both 2017 and 2018 is 51% male and 49% female.

For many more statistics about all the things you would ever possibly want to know about the movie industry in 2018 read the official MPAA report! Link is below!

Next Article: Star Wars Celebration 2020 Will Be In Anaheim