The Lack Of Retools, Repaints And Vision Is Hurting The Vintage Collection

While rummaging through some stuff in my shed this week, I came across a series of two-paks from the 30 (77-07) line. These six Walmart exclusives offered very little newness to the line (the buildable C3PX notwithstanding), and it got me thinking about what’s missing with the Hasbro line post-2014. (more….) 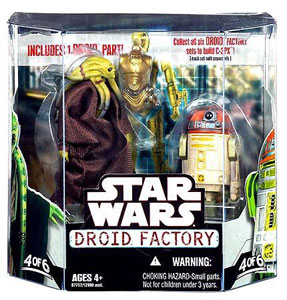 The simplest way I can distill my thoughts is with a question. Where is the ingenuity? Where is the thinking “outside of the box”? Where is the smart reuse of existing pars to help save them tooling dollars so more new figures can enter the line at a brisker pace? This is where the Hasbro Star Wars line severely lacks in the current collector market.

Sure, they’ll occasionally repaint, and existing sculpt and make a new character out of it, but it doesn’t happen more frequently than it does. The Walmart exclusive Droid Factory line brought 13 action figures to the line. And while many of us rolled our eyes at another Luke Skywalker or Han Solo or Darth Vader figure action figure entering the line again, Hasbro changed all of them to some degree. But more importantly, they paired them with a protocol droid or astromech droid we’d never had in the line to date (or at the very least a supposed upgrade from a previous release).

Is the Walmart exclusive Droid Factory line the “greatest” thing that Hasbro’s produced to date? Of course not. But between the diverse sourcing of the sets (from Tartakovsky’s Clone Wars micro-series to The Phantom Menace to The Empire Strikes Back), to the ingenious reuse of existing parts to bring us astromech droids and protocol droids never before part of the 3.75″ scaled line, the Droid Factory line holds a special place in collectors’ hearts. Also, look at the packaging. It’s beautiful!

Hopefully, the 2019 version of the Hasbro Team will find ways of providing collectors with clever exclusives and new action figures without exhausting their tooling budget. If six of the eleven figures from the first wave of 2010’s The Vintage Collection could enter the line as retools with very few people noticing, then they can continue this trend to help develop the line more significantly, and offer characters that would be available to us in any other way. For example, where the heck is the Clone Trooper Captain or the Clone Trooper Commander that utilizes the VC45

So, Hasbro, please think outside of the box and make good use of your existing tooling!

Next Article: It Felt Like It Went So Smoothly Too; Walmart Is A Disaster