The Ohio Star Wars Collecting Club (OSWCC) has produced some great collector case patch sets over the past few Celebrations, but this one might be their best! They revealed a life-sized Laser Rifle Action Figure Case patch set as their Celebration Chicago set. Click through for full details on how you can get each piece! 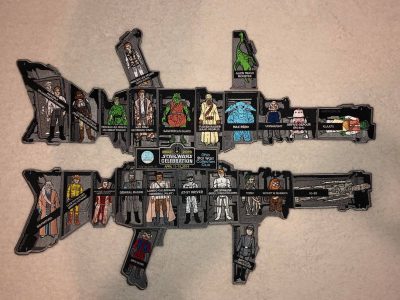 Members of the Ohio Star Wars Collectors Club are pleased to present an exclusive collecting opportunity at Star Wars Celebration Chicago: A 23-piece patch set that makes up a full size vintage Kenner Laser Rifle Action Figure Case. The full set when assembled is the same size as the actual toy at over 24” wide!

Forming the center hinge of the case, the OSWCC patch will be available for trade at room sales, at designated times in the Collector Social Room near the Collecting Track and intermittently at the OSWCC booth (#1240) itself.

The other 22 pieces were sponsored by individual club members, and represent different vintage action figures to “fill” the case. Celebration attendees can relive the excitement of hunting down all their favorite Kenner Star Wars figures by finding the following individual OSWCC members to trade for and collect these action figure patches:

Each member, wearing a black badge buddy with their name and sponsored piece shown on a lanyard (as seen below), will be around the OSWCC booth often, in panels in the Collecting Track, and anywhere patch trading is happening. Good luck and MTFBWY! 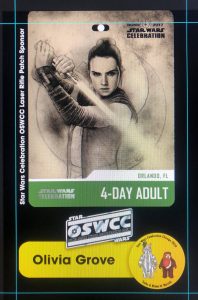