Please read the update further below!

We do know that a desert planet will be featured in Episode IX, up to this point speculation was that it might either be Tatooine or Jakku. Now that question has been answered, apparently. Episode IX will feature Jakku.

We may speculate that this is somehow related to Rey’s past and the very reason why she ended up on the planet in the first place. There’s some speculation about a possible retcon of Rey’s parentage and/or that what both the First Order and Resistance are after is some “controversial” MacGuffin.

The real question is: why would the First Order assault a backwater planet such as Jakku in the first place. Maybe something lies hidden in one of the many wrecks there? Otherwise Jakku appeared to be a featureless, boring sand desert with little of interest to anybody. So my guess is Jakku is closely tied to both Rey’s real past and the MacGuffin.

So it seems Rey will finally get her wish from The Force Awakens, she can go back to Jakku! It may be somewhat unfortunate that this mirrors Return of the Jedi and Luke’s return to Tatooine. But Rey will most certainly return for very different reasons, not because she wants to rescue someone. The recent photo of Daisy Ridley’s, John Boyega’s and Oscar Isaac’s last day of filming posted by JJ Abrams on Twitter showed them all together on location in a desert setting (Jordan) – which probably means that our heroes may finally share more scenes together. And that maybe the Assault on Jakku could be the final act of the movie. But most Hollywood movies are not filmed chronologically, so for all we know the Assault on Jakku may also happen in the first act. 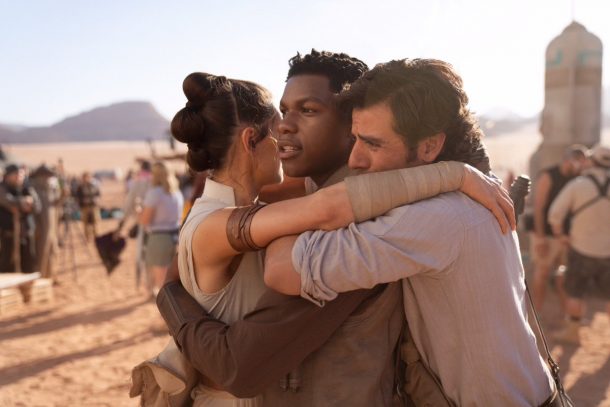 What do you think might be the reason for going back to Jakku? And remember, the list of LEGO sets is unconfirmed and merely a rumor at this point.
Feel free to discuss any spoilers for Episode IX here. For example, some recent spoilers say that Keri Russell’s character may be some female bounty hunter, with a look not too unlike Zam Wesell’s in Attack of the Clones. Also, Naomie Ackie’s character is allegedly Finn’s sister (it must be a very small galaxy after all) and not Lando’s daughter, or so the rumors say and lastly, there will be several flashbacks featuring Luke and Leia, perhaps de-aged, perhaps played by double doubles with added CGI faces, similar to what Rogue One did with Tarkin and Leia, but no further details are known here. There’s plenty to discuss!

UPDATE: some new leaks suggest that the “Assault on Jakku” LEGO set might actually be from The Force Awakens after all, as some commenters already suggested. Apparently, Episode IX will go to Tatooine after all and in addition to that also to some new desert planet we have not seen before. Which probably means Jakku will not be in the movie? Leaks also say a Lars Homestead set was built at Pinewood. Now we can wonder why the Lars Homestead is in the movie and if it’s featured in a flashback or if some character is revisiting her or his past…