Last night, Hasbro’s Solo: A Star Wars Story line was featured on the Simpsons very briefly. While competing in a “toy store shopping spree” contest, Bart and Mulhouse crash and lose while trying to avoid the Solo toys (and Ralph wins). You have to wonder there if there is some intentional subliminal statement somewhere in this very brief scene about the state of Star Wars and collecting. I wouldn’t put it past Matt Groening. He’s a brilliant man. Special thanks to JTA reader Aldo for the alert and image. 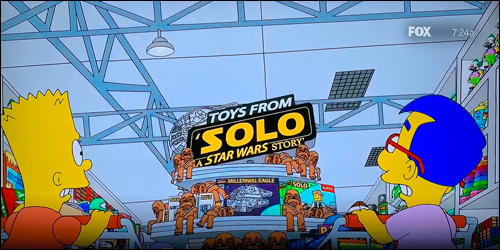