Everything You Need To Know About Reissued 2019 TVC Gamorrean Guard

The Vintage Collection Gamorrean Guard (VC21) figure will be available next month in a more widespread fashion. But the figure has already hit Asian markets. We have a full look at what you can expect when you receive yours. We’ve also updated out 2010 review by adding 24 new images, including comparisons, to the original review, in addition to updating new Collector Notes. Be sure to check out the updated review, but also click through for a distilled list of how this release differs from previous versions. 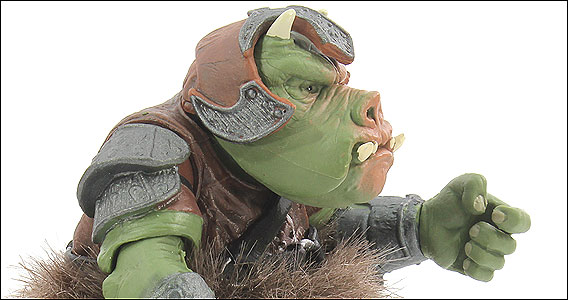 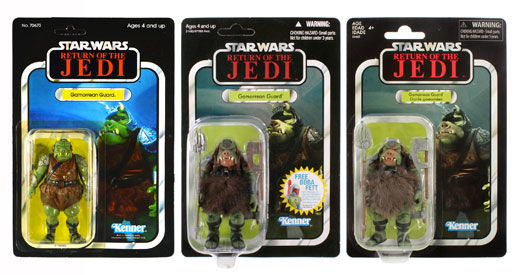 You’ll notice significant card art differences between the 2010/2012 (re-release) and the 2019 version. Background details in addition to the characters facial coloring are notably different this time around. It’s safe to assert that the 2019 card back in the nicest as far as the image of the Gamorrean Guard. But this is negated thanks to the foreign language text on the name pill, as well as the colossal punch hole and other things that clutter the graphics. Interestingly, Hasbro never managed to match the background and name pill color of the original 1983. It’s bright yellow, NOT bright green! The toxic waste green skin color of the vintage Kenner figure’s image has fooled us into thinking that a bright or neon green color was used for the enhancement details. 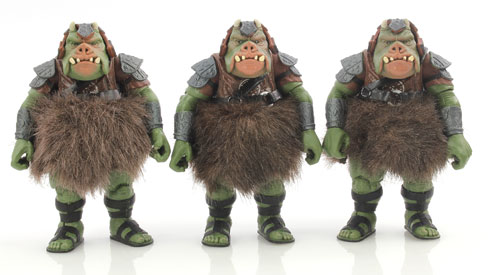 Not counting the pack-in figure that comes with Jabba’s Rancor Pit, this is the third time Hasbro released the Gamorrean Guard figure as a basic figure. The first was the original in 2010. Then a slightly revised figure with some shiny/glossy details added (and a differing skirt length) was re-released as a carry-forward figure in the 2012 case assortments. Now, the 2019 version comes with a lighter colored fur skirt, less “flesh” color around the nose and more green, and much smaller white dots on the black eyeballs. Aside from some differences in the silver/gray details of the figure, not too much else differs. 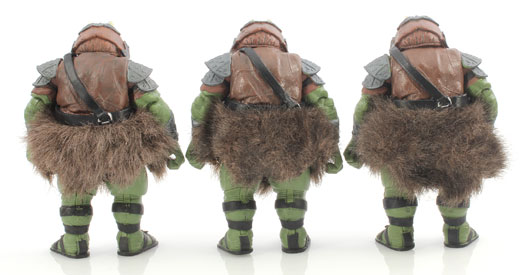 There aren’t too many differences on the reverse side of the figure either. I did notice some extra wash on the new versions upper back, but aside from that, not much else is new here. 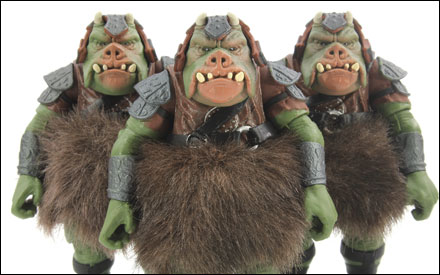 Here is a close-up shot so you can see the eye and facial differences better.

Disappointingly, Hasbro went cheap on the figure’s weapons this time around. The plastic is nearly transparent, and there is no extra deco showing dirt, grime (or blood?) with the 2019 version. This lazy approach is a big disappointment for us.

The Gamorrean Guard comes with a new product number, new UPC and the Disney logo is now present on the packaging. We are unable to assert if this version of the figure is better or not. It’s different, and some of the details are inferior as far as we’re concerned.

Please be certain to check out our updated Gamorrean Guard (VC21) review with an additional 24 new images of the updated 2019 figure added to the gallery in addition to comparison pictures.