J.J. Abrams Sure Loves His Secrets

Keeping Star Wars movie titles secret has a long tradition. But the master of keeping things close to his vest is maybe J.J. Abrams, who doesn’t want to spoil anything before the release of a movie. He sometimes resorts to outright lying even when asked about potential spoilers. He did deny until the last minute that Khan would make an appearance in Star Trek Into Darkness, for example. Though he regretted that misdirection later and said it was wrong. Anyway, Star Wars fans ask themselves when we’ll get the Episode IX title reveal. And if there already is a title one thing is sure: not even some of the more important – or at least visible – members at Lucasfilm know about it, as this tweet by Pablo Hidalgo proves: 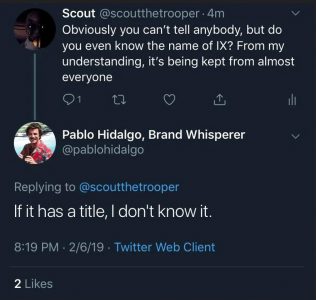 Expect no early title leaks for Episode IX, not in the source code of the Star Wars website or from some actor or member of Lucasfilm accidentally spilling the beans. We’ll know the title in time. Until then… patience!

Next Article: Yeager & Bucket Back In Stock On Amazon!