How Popular Is Star Wars Among Kids In Europe?

The Kids License Monitor is released every three months and gives insight into the popularity of licensed toys among kids in three European core markets: the UK, France and Germany. These three countries are also the core legacy markets for Star Wars in Europe, where Star Wars has always been very popular. JTA had an article about the previous License Monitor. But now the report for the fourth quarter of 2018 has been released. Time to look at how and if things have changed. Where does Star Wars rank among kids aged 4-12 in the UK, France and Germany? Click through for more details! 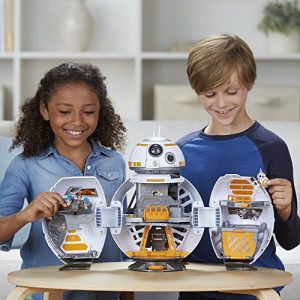 What Disney execs dream of at night

The Kids License Monitor looks at two metrics: appeal and hype status. Appeal is all about overall popularity of a license. Hype status is about how much kids actually like toys based on a license.

So, let’s take a look at overall popularity.

Next, let’s look at the Hype Status, as the Kids License Monitor calls it, how much kids actually like having a license on their products (which is different from overall popularity of a license, this category examines popularity of toys):

And Star Wars does fare better here. It is in 10th place in Germany and even in 2nd place in France. But what may be disturbing for our friends from the UK, Star Wars is not among the top 10 licenses at all in this category.

And a more detailed breakdown for Germany (as mentioned above the data for UK and France is not available for free, unfortunately):

The good news is that older boys in Germany still like Star Wars toys the most. But among younger kids it’s not among the top three licenses. However, looking at past data this age group is quite fickle when it comes to their preferences. And girls have vastly different interests, they love Frozen and licenses more geared towards girls in general.

To finish things, let’s take a look at the overall trend. For this I looked at the Hype Status (i.e. popularity of licensed toys) for the three countries for the past two years: 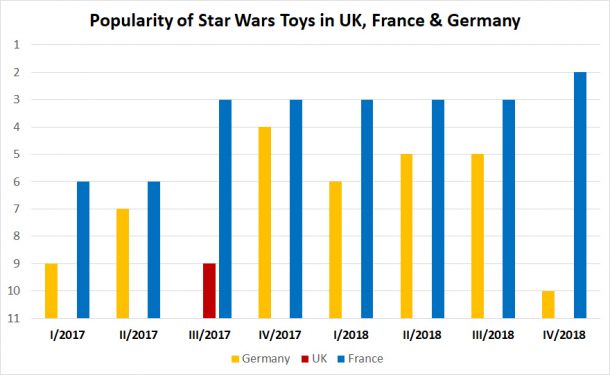 As you can see, for some reason kids in the UK don’t really like Star Wars toys as much as kids in Germany and France. Instead the UK has Harry Potter among the top 10 popular licensed toys. Star Wars only made the top 10 of most popular toys in the UK in III/2017. French kids love Star Wars toys the most, it’s been among the top 3 most popular licensed toys for over a year now, even increasing in popularity in the last quarter without any movie release. That may bode well for Galaxy’s Edge in Eurodisney Paris.
German kids are much more fickle when it comes to Star Wars. Unfortunately without more data we can only guess what the reasons for the vast differences between the three countries are. It may very well be that cultural differences play an important role here: Harry Potter, while a universally beloved franchise, is still a very British thing and therefore maybe more popular in the UK than elsewhere. But this is just a guess.

And finally a look at how popular Star Wars toys are among boys in Germany, unfortunately the data for the UK and France is not freely available, but Germany is a core Star Wars market and among the top 3 toy markets in Europe: 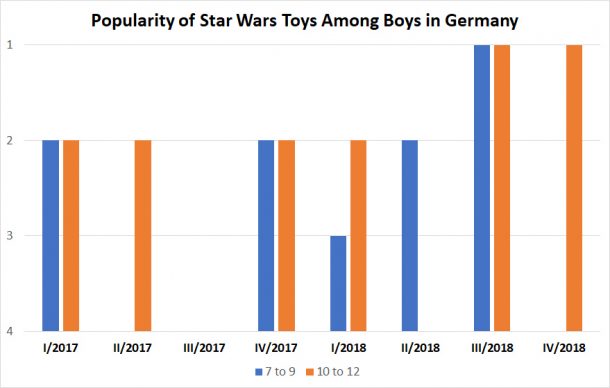 The age group 4-6 doesn’t list Star Wars toys among their top 3 licenses even once, but once boys reach 7 Star Wars appears on their radar. And both age groups 7-9 and 10-12 more or less equally like Star Wars with some fluctuations here and there. The 7-9 age group appears to be more fickle and Star Wars can be the most popular toy license in one quarter and no longer make the top 3 licensed toys in the next quarter. Without more data it’s difficult to say what the reasons are. It may be tied to the release of movies or the lack of releases.

So to sum it all up… there are huge differences between the UK, France and Germany when it comes to the popularity of Star Wars toys among kids. And when we look at gender, girls in Germany are into very other things and Star Wars only makes the top 3 licensed toys among boys and only when they are older than six.

But when we talk about overall popularity then Star Wars doesn’t make the top 10 in neither of the countries studied, other – more kid friendly – licenses are the winners here. It seems that Star Wars as a whole struggles to connect, which may be explained by a lacking appeal to girls, other franchises might have a more universal appeal.

Star Wars is only really popular with boys, apparently, at least in Germany. And even here popularity can vary greatly from quarter to quarter. Which means Disney and Lucasfilm must find means to engage children more often. They should also think about adapting certain formats for foreign markets since kids in France and Germany probably will not watch English language YouTube videos.
And whether or not getting girls into liking and buying Star Wars toys is a lost cause may also be up for debate. Maybe Disney should focus on what they have and not on what they don’t have. Previous attempts at getting young girls into Star Wars were not met with much success. Maybe Disney would be best served if they focus more on boys and their preferences again since despite all the female main characters in Star Wars, girls – at least in Germany – simply enjoy other things much more, more traditional “girly” stuff, so to speak. Even if they have more action oriented female Star Wars characters to identify with than before. It seems there is still a gender divide between girls and boys when we talk about Star Wars toys despite various attempts to change that.

Unfortunately no similar data seems to exist or is freely available for the USA. And things may be different there. So all we have is data from the three most important European toy and Star Wars markets.

With the very limited data freely available we can say that once boys reach school age they apparently get to know Star Wars and learn to like the toys. But even so, Star Wars as a whole fails to make the top 10 popular licenses and in Germany it made the top 3 popular licenses among boys only once in the past two years. Disney has some work cut out for them if they want to engage more children with Star Wars.

And what do you think? How are things where you live? Give us anecdotal observations, if you like. Are things much different in the USA or elsewhere?