The Walt Disney Company released its proxy statement for the full year 2018 last Friday, January 11th. And it may surprise no one to learn that Star Wars earned less money for Disney in 2018. I took this opportunity to not only look at the current report, but also at past reports, to see what has been going on. So click through for a more detailed look and some insight into the reasons for decreasing revenue. Straight from the Mouse’s mouth!

Disney’s annual report has made the rounds since Friday, but I looked a bit deeper even, not just focusing on 2018 or 2017. Star Wars merchandise (not movie) revenue is filed under Disney’s “Consumer Products & Interactive Media” segment. So I went all the way back to 2008 to see how Disney’s numbers developed over the years.
Before June 2015 Consumer Products and Interactive Media were two separate segments, however Disney combined the two segments after June 2015 and the 2016 report listed numbers for the two segments combined. To make things comparable I added the numbers for Interactive to the Consumer Products segment for the reports that listed these two segments separately.
Also, Disney’s fiscal year ends in September. So their annual reports include the last quarter from the previous year, which is why a movie such as The Force Awakens and any effects it had on merchandising etc will be listed in the 2016 report, since The Force Awakens was released in December 2015.

Disney’s Consumer Products & Interactive Media segment generates revenue from licensing characters and content from their film, television and other properties to third parties for use on consumer merchandise, published materials and in multi-platform games and from operating retail stores, internet shopping sites and a wholesale business. It also generates revenue from the sales of games through app distributors and online, consumers’ in-game purchases, sales of self-published children’s books and magazines and comic books, advertising in online video content and operating English language learning centers. Significant expenses include costs of goods sold and distribution expenses, operating labor and retail occupancy costs, product development and marketing.

So, in short, this is where all the money made with Star Wars through sold merchandise, games, books and comic books goes. It might be of interest to fans of EA’s Battlefront that Disney also gets a cut from in-game purchases.

Let’s cut to the chase and let me show you the first bar graph, overall revenue and earnings for Disney’s Consumer Products & Interactive Media segment since 2008: 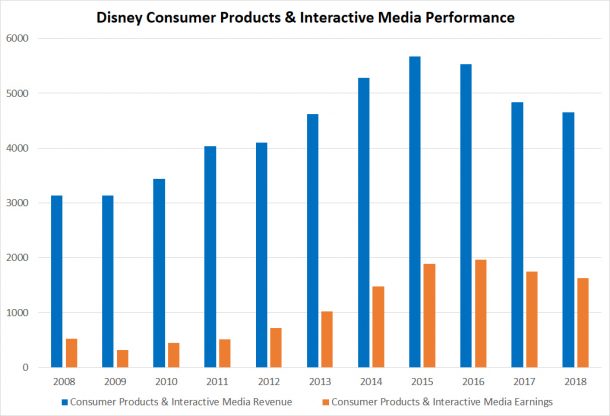 So what can we see? Disney’s Consumer Products & Interactive Media segment saw growth until 2015. But ever since then revenue and earnings decreased again. And this in a time when there is more merchandise out than before. But before we delve into the reasons for that let’s look at revenue and earnings growth: 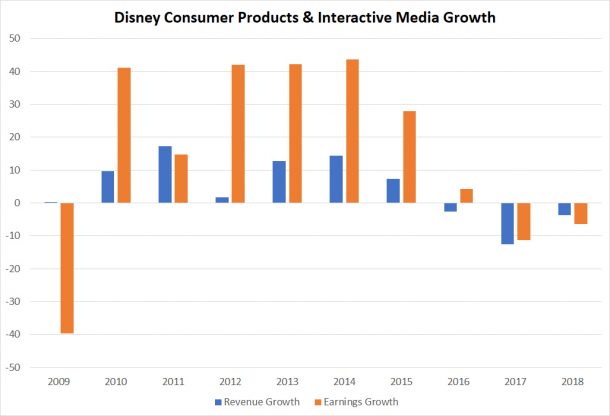 So what exctly is going on here? Why did revenue and then earnings decline in recent years? Disney gives some general reasons in their reports. What follows are quotations from Disney’s reports:

2015 – The 14% increase in licensing and publishing revenues was driven by a 13% increase from our merchandise licensing business due to the performance of merchandise based on Frozen, Avengers and Star Wars classic, partially offset by unfavorable foreign currency translation impacts due to the strengthening of the U.S. dollar against major currencies.

(Note: Star Wars Classic means Lucas era Star Wars of course, probably to differentiate it from New Star Wars with even more sugar! Disney always says Star Wars Classic in their reports when they talk about the Lucas era. It’s interesting to see and it corroborates with Hasbro’s numbers that one year before The Force Awakens Star Wars merchandise sales were up.)

2016 – Lower games revenues were due to the discontinuation of the Infinity business, lower performance of our Frozen Free Fall mobile game and an unfavorable FX Impact, partially offset by revenues from Star Wars Battlefront, which was released by a licensee in the current year. Higher merchandise licensing revenues were primarily due to the performance of merchandise based on Star Wars and Finding Dory/Nemo, partially offset by higher revenue share with the Studio Entertainment segment, a decrease in revenues from Frozen merchandise and an unfavorable FX Impact.

(Note: The Force Awakens made quite a splash and drove merchandise sales)

2017 – Lower games revenue was due to the discontinuation of Infinity in the prior year and decreased licensing revenue from Star Wars: Battlefront. The decrease at our merchandise licensing business was due to lower revenue in the current year from merchandise based on Star Wars and Frozen and an unfavorable FX Impact, partially offset by a benefit from licensee settlements and higher revenue from merchandise based on Cars. The decrease at our publishing business was primarily due to lower sales of licensed and self-published books based on Star Wars and Frozen and a decrease in sales of comic books based on Star Wars.

(Note: Rogue One sold less merchandise than The Force Awakens, which was to be expected)

(Note: That merchandise based on The Last Jedi sells worse than for Rogue One was most certainly a surprise for Disney and Hasbro)

Disney’s remarks mirror the numbers Hasbro reported for its partner brands. Star Wars merchandise sales have been declining ever since October 2016 (remember that Disney’s fiscal year ends in September).
But not only merchandise seems to be affected, since Star Wars book sales and comic book sales are also down. So Star Wars as a whole seems to be in decline at the moment.

Now, it’s impossible to say how much of the revenue and ratings decline is due to decreasing Star Wars merchandise and book sales, Disney has an expansive list of licensed products out there.

But Disney’s fiscal year 2018 saw three major Star Wars releases, Battlefront II, The Last Jedi and Solo. That overall Consumer Products & Interactive revenue and earnings are down nevertheless should be reason to be worried for Disney. We’ve never had as much Star Wars content as in that period and if Star Wars was still a powerhouse revenue should have increased, especially given Marvel’s strong performance. But all signs we have say that 2018 was a very bad year for Star Wars merchandise and Disney sees this as decreased revenue from licensing, books and games.

And to add insult to injury Disney doesn’t mention Solo – A Star Wars Story by name even once in its report. When they talk about significant studio releases The Last Jedi is listed among “other significant titles”, but Marvel is mentioned first and foremost when Disney talks about increased revenue for their Studio Entertainment segment.

As well all know, Disney has reacted, as is evident by Bob Igers interview from 2018 in which he announced that they would overthink their release strategy for Star Wars.

I know it may be tiresome to only get bad news when we talk about the financial performance of Star Wars in the past year or so. But the future of the franchise depends on its financial success and things are in decline here.

We have discussed potential solutions before. Most fans agree that better content is needed, Hasbro can only make figures that we see in movies and tv shows and massive peg warming of several main characters from Rogue One, The Last Jedi and to a lesser degree Solo shows that there is a real problem with demand for (sometimes heavily repacked) main characters.

We have to see if Disney can turn around the ship and if the upcoming Disney+ series and Episode IX will put Star Wars back on track.

And as a final note, Disney has some expectations about the “useful life” of Star Wars. This is what Disney had to say about Star Wars in their annual report for 2013, which first included Star Wars:

Intangible assets primarily consist of intellectual property based on the Star Wars franchise with an estimated useful life of approximately 40 years.

That was five years ago.

Previous Article: HURRY! TVC Mimban Stormtrooper Is BACK IN STOCK!

Next Article: Get Those TVC Stormtrooper (Mimban) Figures Price Adjusted!