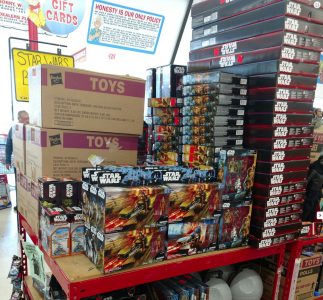 A manufacturer can choose from a variety of distribution models. There are three basic models.

Hasbro usually has intensive (mass) distribution. What that ultimately leads to, however, are figures that end up at bargain stores, or toys that are sold for a fraction of their original price at places like Walmart.

The ultimate question is: is the mass distribution of Star Wars toys and the subsequent fireworks of discounts and clerance prices good or bad for the brand and the image? Or to rephrase it: do we, do fans, do Hasbro and Disney want Star Wars to become associated with “cheap”, “bargain”, “unsold stock” and ultimately “clearance fodder? 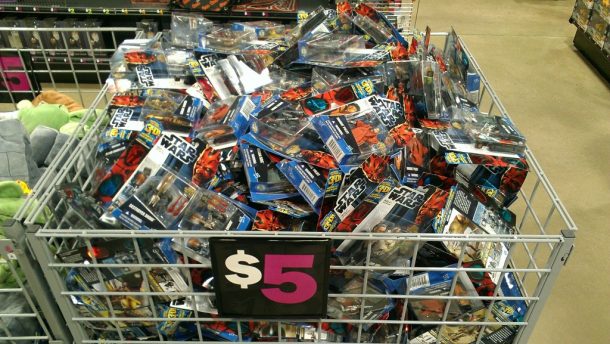 Even though the legal situation is different between the EU and the USA, there are still similar regulations in the USA regarding selective distribution and restrictions a retailer may enforce.

The FTC, for example, explains on their info page that manufacturers absolutely have the power not only to set maximum (or ceiling) prices, they can also set minimum (or floor) prices, basically restricting what prices a retailer can offer.

Thus, in theory, Hasbro could set up agreements with their various retail partners that put limits on how expensive or how cheap something can be. And Hasbro also has the freedom only to supply those retailers with toys that agree to this policy.
Hasbro could most certainly prevent Star Wars toys from ending up at Ollie’s and similar stores. The very fact that they are at Ollie’s implies Hasbro is basically ok with it.

Now, it may very well be that production runs are so high and the actual demand for toys is so low that Hasbro would otherwise book an even greater loss if they prevented clearance sales for Star Wars toys.

The ultimate question, however, is this: what distribution model is good for Star Wars? Maybe it would be a good idea to give Star Wars more of a somewhat exclusive image once again. Basically, it all boils down to Disney’s licensing policy. Do we need a Star Wars label on any conceivable product, so Disney can maximize its revenue from licensing in the short term, or would it be better for the brand as a whole if Star Wars is something you associated with quality, a premium experience, fair prices, but neither ridiculously high nor ridiculously low prices?

We can only guess what all the Star Wars toys on clearance and ending up at discount stores do for the brand image. I guess it’s nothing positive. 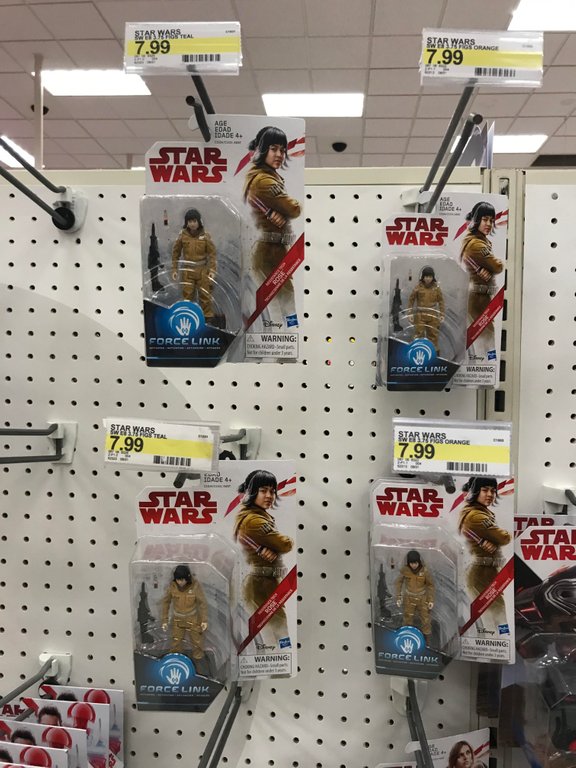 When even discounted figures don’t sell

In my opinion it’s time both Disney and Hasbro rethink their approach to Star Wars toys. Maybe production runs could be lower without losing any revenue by making sure the toys are considered high quality and premium so that fans want to pay MSRP. Maybe it’s time Hasbro used a selective distribution system and set certain rules regarding both maximum and minimum prices, maybe it’s time Hasbro prevented Star Wars toys from ending up as clearance fodder. But to do that the toys that are made need to be of high quality, need to be aimed at collectors and need to have a sensible price.

Only Hasbro knows how much money they still make with the current model, where a toy is sold at MSRP for a few weeks or sometimes not even that and then gets some discounts, then some more discounts and is ultimately clearanced out. Only Disney and Hasbro know what all of that does to the image of Star Wars and its merchandise.

I am no economist, to make that clear. That being said, in my opinion a possible model for Star Wars distribution could look something like this:

The end goal should be to make Star Wars something you associate with quality, fair prices, not too high, not too low and with a premium experience.

If we continue on the current path it may very well be that the more general customer and even fans and collectors will expect Hasbro Star Wars toys to be nothing but clearance fodder and they will simply wait a short time before prices inevitably come down. I am not sure this model is sustainable.

I believe a future in which Star Wars toys not only hold their price, but are something that we associate with premium quality is the better future. The final question is if this is something Hasbro could even do (they can certainly make premium quality toys, the question is if they could afford lower production runs) and whether or not Disney would be willing to pursue that approach. But if the Star Wars brand keeps getting diluted as it is right now the damage may one day be irreparable. Maybe the damage is already done. Star Wars sections get reduced in size. Presentation is lackluster, buying the toys is not an experience you enjoy. Sales are down all across the board, this is also depending on what gets made, of course. And fans who buy something at MSRP feel stupid and silly when a few weeks later the same toys are sold for 25% or 50% less.

What are your thoughts? How do you see the future of Star Wars toys and distribution? What do you want? And if there are economists among us, what are your thoughts? As I said, I am not and what I propose may be something that doesn’t work at all for Star Wars or not for Hasbro who need to sell toys in large quantities. Maybe a future in which a smaller company takes over and makes premium Star Wars action figures for collectors would be something that makes collectors more happy than the current approach. However, prices could go up. TVC could very well be $20 and TBS maybe $25 or $30, depending on the number of accessories.

All I know is, the current model and current system sees Hasbro Star Wars toys in decline. Disney should think hard about characters, character design and restrictions they impose on their licensees.

Next Article: Star Wars [Solo] Mission on Vandor-1 Multipack On Amazon For $16