My local target has just finished their action figure reset, and it is rather sorry. They had the new archive figures in stock (I let some sixer friends know). Unfortunately, the 3 pegs of Vintage Collection figures that were present before the reset are now relegated to just 1. Fellow Council of Collectors members, what can be done? 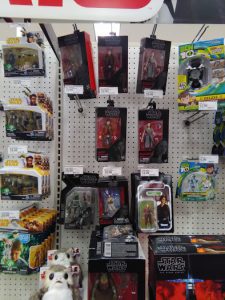 All the figures on the one peg at my Target are figures that have been there since last May, and now there is a big box of repacks in the back room (I’m sure) that will sit there forever and ever. It’s almost like repacks don’t sell that well… I’m looking at you Poe Dameron!!

It’s clear that sellers are conscious that sales for Star Wars have slowed. What can be done about the boggling backlog of undesirables that barely sell as add-on items on Amazon?

I don’t know, but something needs to be done about the future.

Our community has presented Hasbro with countless ideas for figures we actually want, even for repacks. Picking some of them might actually help to sell through future waves of The Vintage Collection. Of the revealed TVC figures coming in 2019, 6 or 8 (from a certain point of view) are new figures. That’s out of 24 figures rumored… In 2018, 10 out of 19 individual figures were new. Look at the issues that repacking 48% of the figures created last year. In 2019 we are currently scheduled for 66% of figures being repacks. If we can’t make it past 5 pegwarming repacks, how will the line ever make it past the next 16? If you really must use repacks to balance the books, please choose wisely.

Another option that could be considered, is to take a look at the number of parts Hasbro has to tool for new figures. I love articulation, probably more than most, but I also understand that not every single figure needs 29 points of articulation. As a general rule, if all troopers/soldiers, bounty hunters, and Jedi had max points of articulation, but droids, background aliens (that aren’t bounty hunters), and figures with large robes/skirts were kept to a more minimal 12-20 points I think it would keep collectors satisfied. Remember, though, the point of that is to allow for more new figures in upcoming waves. If we don’t get anything out of skimping on articulation, just give everything 29 points.

This would also help Hasbro save money in tooling costs. The new Mimban Stormtrooper figure, for instance, probably has around 33+ different pieces and parts to make the figure. Wooof, on the other hand, has closer to 25 parts that comprise the figure. I’m not a manufacturing expert, but I’d venture to guess that Hasbro would save a lot of money. If being more selective about which figures get premium vs standard super articulation leads to more new figures going forward, I am all for it!

Do you have any other ideas that might be able to change TVC for the better?