Who’s that? Vickie Stratford was the Design Director for Star Wars from 2009-2011 (um, the golden years!). If you have any reserve about that time period for Star Wars action figures, just take a look at the Shadow of the Dark Side lines, and the early Vintage Collection Series.  With TVC in full force and The Clone Wars returning for it’s final season, she would be a magnificent fit to run the brand today.

She worked alongside Derryl DePriest and the two appeared together at the celebrated 2010 Toy Fair. From what we’ve seen, we’ve logically concluded that she might be returning to the Star Wars team to replace Steve Evans as the new Director Of Product Design “for one of the most wonderful brands in the galaxy!” Let us know what you think in the comments! 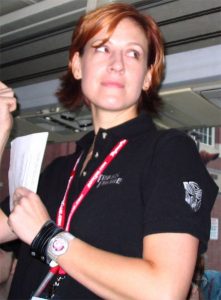 Ms. Stratford when she appeared at a 2007 BotCon during her tenure over the Transformers Brand. Picture from tfwiki.

Next Article: Ready For A Crazy Episode IX Rumor?