What's The Deal With The Vintage Collection's Packaging?

Well, If we’re all honest with ourselves, The Vintage Collection hasn’t gone the way most of us wanted it to go. This criticism is not intended to undercut the incredible work Steve Evans did with the Saelt-Marae and Klaatu (Skiff Guard) figures (and the rest of the newness he’s brought to the line). In my opinion, he should be allowed to retire with how beautiful they (and the rest) turned out from most 3.75″ super-articulated action figures. Photorealistic technology begins this year for human/humanoid 3.75” figures. (We already see some elements of this technology with the Resistance figures.) All of that is well and good. But when it comes to The Vintage Collection packaging, it appears we’re not forging ahead as much as we need. If you’re a loose collector, please move along as you’ll likely find this post pedantic. (more….)

Let’s give credit where credit is due. After the first couple of wave of TVC came with obnoxiously large bubbles, collectors reacted. And then Hasbro quickly responded. The enormous plastic coffins took over the precious real estate of the front of The Vintage Collection card, and after some backlash, Hasbro announced that there were looking for more appropriately sized bubbles. And as we know, that went into effect without a hitch. They followed through. But then “Bubblegate” reared its ugly head and the figures began to fall off of the cardboard backers. Hasbro announced that this is resolved too, and so far it looks to be the case. Time will tell. It’s easy to see how TVC travels a bumpy road.

So now that so many things are in order, what other problems could remain? Well, we have aesthetic issues wreaking havoc on the beautiful line. With the thanks of JTA reader and friend Binary_Sun, we’ve outlined the issues remaining preventing The Vintage Collection from being all it can be. We thank him for the graphics he provided to help illustrate these issues.

Notice the much too-deep red color used for the Return Of The Jedi logo. A reddish-orange color was used by Kenner back in the day, and that’s the correct color to use for The Vintage Collection. We wish Hasbro would do a better job at matching the original color of the original logos. A more pressing issue, however, is the lack of gold highlights in the “racing stripe” going around the logo and the border of the card. Hasbro’s modern version is much too silvery and gray and needs the gold for accent and to create the metallic sense of the original Kenner card back. Also, the figure, accessories and anything else included must stay within the perimeter of the color background. Leia’s floating Boushh helmet crosses over the colored background and messes up the visuals of the presentation of the figure. You may roll your eyes over this, but trust us, it affects the display of the figure. 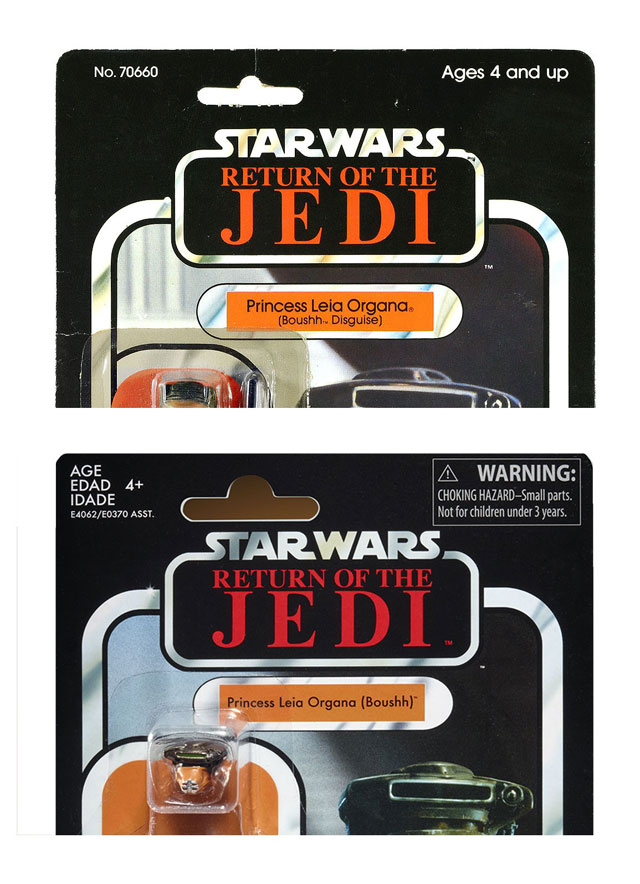 While updates to the Star Wars logo and the border that encircles the card back would be appreciated, the most egregious issue for many that needs urgent updating is the “name pill.” There are major issues with the style of the font, the size of the font, the color of the backgrounds Hasbro uses and the shape of the name pill. Hasbro needs to refamiliarize themselves with how Kenner labeled the figure’s names and how they placed them on the card art. The primary name is more substantial and sits above the smaller subtitled name (which also goes inside of parentheses).

I want to know why Hasbro isn’t using the Avant Garde font. And why isn’t a bigger size of the font used? Right now it’s lost in the name pill. The character’s name doesn’t stand out. Heck, we were able to find and utilize that font for our vintage Kenner RDRs. The font alone makes all the difference in the world. Also, why can’t they match the right color of the backgrounds? Look how off the orange is on the modern Princess Leia Organa (Boushh) figure below. The colors aren’t bright enough an don’t “pop” the way they should. But all of the figures, regardless of color, are off as well and have the same problem. The shape of the pill is NOT elongated/stretched and slightly oblong. It’s perfectly rounded and in proportion with the thickness of the rest of the pill. I would love to see Hasbro correct this as well. 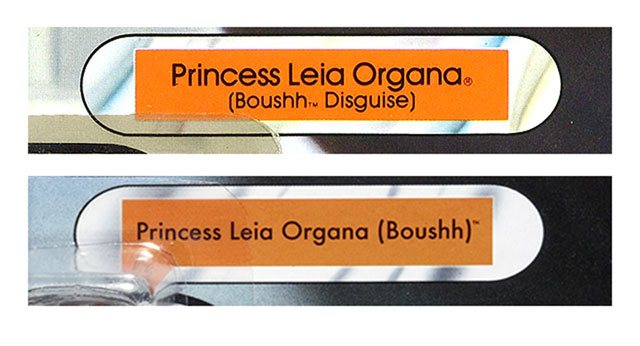 You can see most or all of the same problems on the Klaatu (Skiff Guard) figure too. They not only ignore the way the vintage Kenner figure was named, but they show little regard for what keeps it a classic figure by ignoring these essential details. While we’re all for them updating the backgrounds slightly to improve them, why do they go in an entirely different direction with color? Klaatu’s background shouldn’t be as gray as it is. And again, if they added some gold into the log and the racing stripe around the figure, it would brighten up the card art tremendously. Kenner used these brighter colors to contrast against the featured figure, to enhance it and focus on it. 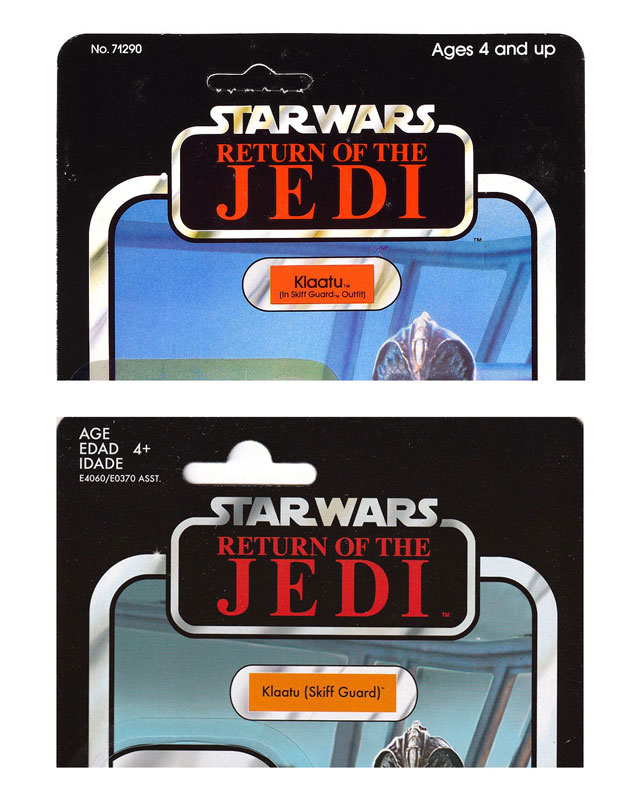 As you can see, Hasbro shapes the name pill depending upon how they feel at the moment or by which direction the wind is blowing. Klaatu (Skiff Guard) has an utterly different-shaped name pill than Princess Leia Organa (Boushh). Shouldn’t they remain consistent shapes throughout the entire line? Look at the harsh curve present on the modern Klaatu (Skiff Guard)’s nameplate/pill.  It almost looks boxy. And once again, the subtitle of “Skiff Guard” should be below the word “Klaatu” in a smaller font and within parentheses. I am unable to process why they ignore these critical details. 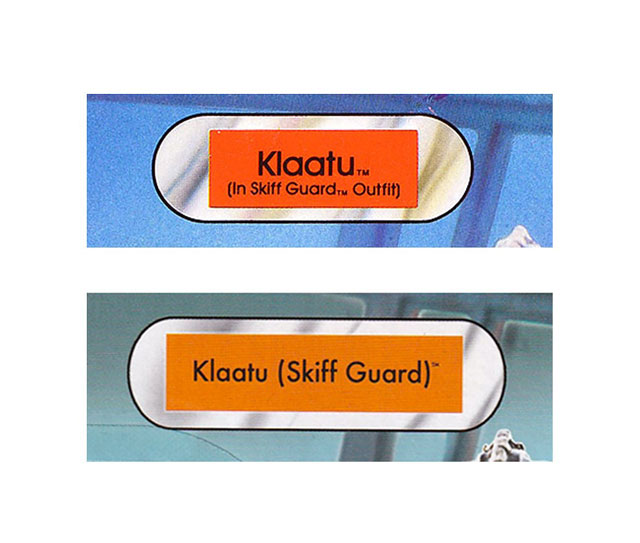 Previous Article: What Working On Episode IX Will Get You

Next Article: 3.75" Articulation: When is it Too Much?