What Working On Episode IX Will Get You

Either the filming of Episode IX is finished or at least it has finished filming at Pinewood, either way, a British modelmaker posted a few pics of the crew gifts she received as a thank you on Instagram. It appears you’ll get a thank you note, a “IX” branded bag, a t-shirt with a Bad Robot logo (plus some other shirt with a boombox print), and a crewjacket with a “IX” logo. Click through for a few more details! 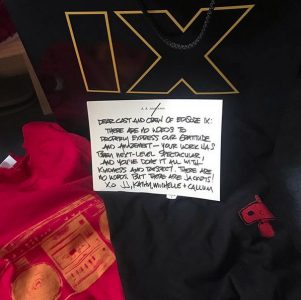 The thank you note says:

Dear cast and crew of Episode IX:
There are no words to properly express our gratitude and amazement – your work has been next-level spectacular, and you’ve done it all with kindness and respect. There are no words. But there are jackets!
XO JJ, Kathy, Michelle + Callum

The photo was posted on Instagram by model/propmaker Hannah Treharne (her first big job was Ready Player One), on her Instagram you can also see how the very happy modelmaker wears the jacket. The people who thank the crew are JJ Abrams, Kathleen Kennedy, Michelle Rejwan (she used to be an assistant for JJ, and she was co- producer for a couple of his movies, including TFA, she’s a producer for IX) and Callum Greene (who also worked as a producer on The Desolation of Smaug, Pacific Rim, Crimson Peak among other things, it’s his very first Star Wars movie).
With production for IX either coming to a close or being finished already… what are your hopes for the movie? And: will you search ebay every day now to see if someone will auction off their Episode IX jacket or Bad Robot t-shirt to make some sweet money?

Next Article: What's The Deal With The Vintage Collection's Packaging?