This topic seems to come up fairly frequently in a Facebook Group that I’m in, and has been the topic of recent conversation on some other collecting sites too, so I wanted to share my thoughts about articulation. These thoughts come from the last conversation I had on Facebook about it about a week ago.

Personally, I am all for super articulation, but I understand that sometimes it can get in the way of a good sculpt. In this article you’ll find the reasoning behind my desire to have Hasbro give all their figures full articulation, as well as some possible advice for future production of The Vintage Collection figures. Click through for more! 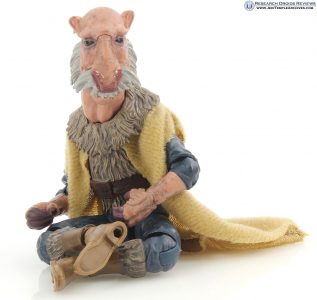 Here we have 3 generations of stormtrooper. TAC, TBS, and TVC – from left to right.
Swivel hips, ball jointed hips, and ball jointed with a thigh swivel. This article will outline why having both ball jointed hips and thigh swivel joints is essential to creating an action figure that will surpass all its predecessors. 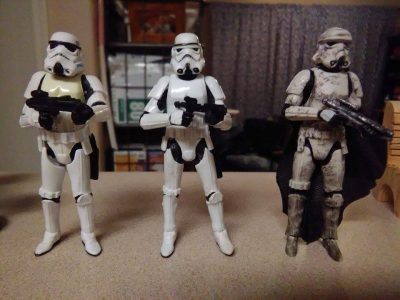 First up: off duty.
Here we have a simple sitting pose. As you can see, all 3 sit just fine, with the TAC version probably the easiest since he isn’t leaning, nor are his legs super wonky. 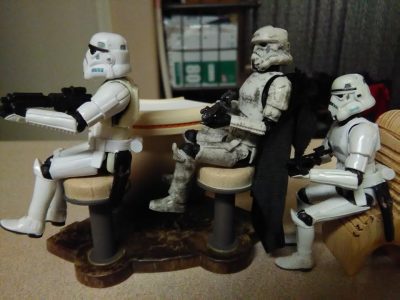 By super wonky, see the next picture. Take a close look at the ridge along the thigh armor. As you can see, the TAC figure and the TVC version have the ridge running in a mostly natural position along the top of the leg. The TBS figure on the right, however, has a big issue where the ridge is all the way on the side of the leg – totally unnatural. 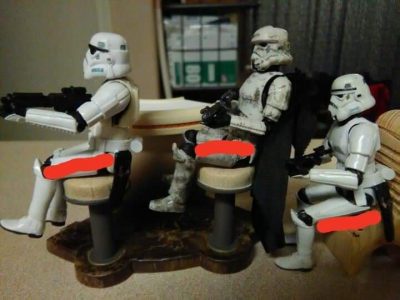 So just get rid of the ball jointed hips you say? But wait there’s more. Here is our next pose: kneeling. The swivel hips simply don’t cut it. I couldn’t get that trooper to kneel for the life of me… The ball jointed hip was necessary to achieve a kneeling position. The next picture will show how the thigh swivel again makes the position superior to the TBS version that doesn’t have it. 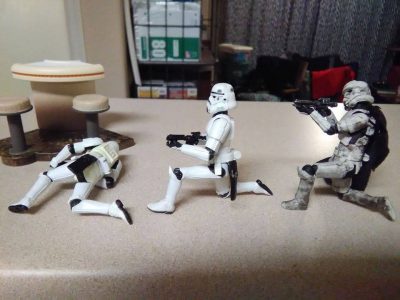 The TBS version in the middle still has the issue of the thigh armor ridge being twisted to the side unnaturally. You also must extend the foot down, and the leg must be straight back. Try kneeling like that for any extended amount of time….. You’d fall over sideways, too.
The TVC trooper on the right, though, has the thigh armor upright, and the knee is allowed to twist slightly inward so his weight is more supported naturally on his back leg. The foot doesn’t need to be extended either (but this is more due to a better knee joint). 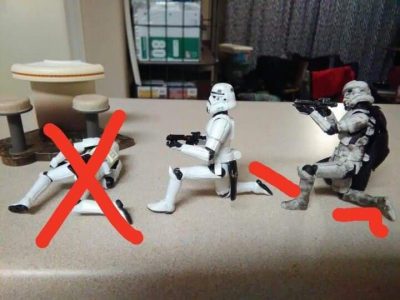 Last picture, and then one final comment.:
You can see more clearly the extremely dynamic pose the TVC figure is allowed to achieve. Much of this is due to a thigh swivel. 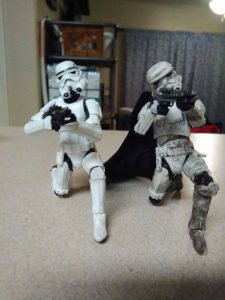 Just swivel hips don’t cut it, if you want your figures to kneel. At minimum you should have the ball jointed hips in order to get the figure into the poses shown above. Figures that have ball jointed hips but not thigh swivel include ones like Pre Viszla, or Lando Calrissian.

The issue really comes down to whether Hasbro is willing to take the time to decide whether a figure should have a thigh swivel or not. To be honest, I don’t think they will. If I had to choose between all the figures released having the thigh swivel or not, I would choose to have it, because I feel it benefits more figures than it doesn’t.

In the end, I agree that some figures aesthetically don’t need the thigh swivel, but for accomplishing all poses, they do. If we get a new design director who feels this is an important issue, I hope that they will take the time to decide which figures should get the ball jointed hips and thigh swivel versus only ball jointed hips (no more swivel only since they can’t kneel).

If, like I feel may be the case, they don’t care that much, and we would have to choose between one or the other, I hope they continue with the full articulation that truly makes these the best ACTION figures they can be.

Previous Article: What's The Deal With The Vintage Collection's Packaging?