The new year is fast approaching, only two more days and 2018 will forever be history. No one knows yet what 2019 will bring us, but we do know what 2018 gave us. So I thought it’s the appropriate time to look back at a year 2018 that was less than great for Star Wars, but still brought us some great Star Wars toys. Click through for the things you love most, bar charts and lots of text, you will not regret it!

Since all of us here are action figure collectors I think it’s only appropriate to begin with a look back at 2018 action figure releases by Hasbro. I will not discuss individual figures, instead I decided to give you a general overview of what was released by Hasbro in 2018. For this I focused on The Black Series, The Vintage Collection and Force Link (5 POA). Apology to the 1 1/2 12 inch Shampoo Bottle collectors, maybe next year!

Let’s begin with the Black Series, here’s an overview of the releases we had in 2018: 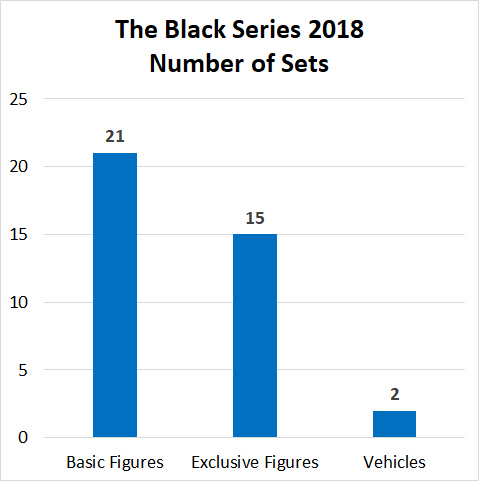 I counted the Dewback as a vehicle

And without much further ado the same overview for TVC in 2018: 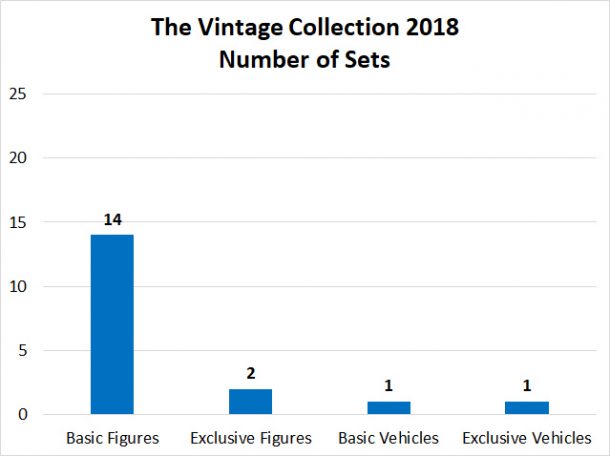 I left out Rey (Island Journey)!

I did not include the single Emperor Palpatine figure which was not released in the US. Also Resistance Figures are not considered either, they are an official 2019 release.

And now let’s compare the total number of sets for all the three toylines: 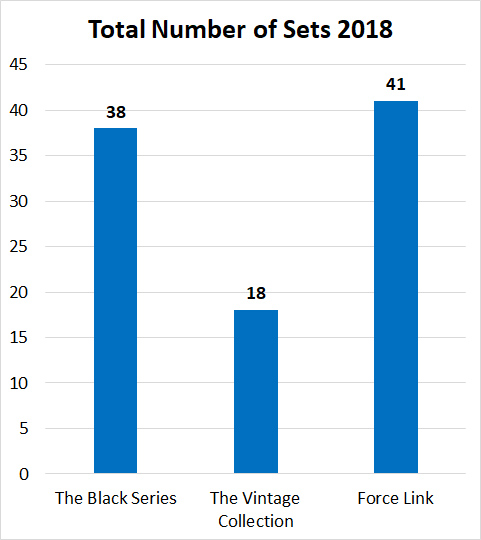 And finally, let’s compare the basic and exclusive releases for each line: 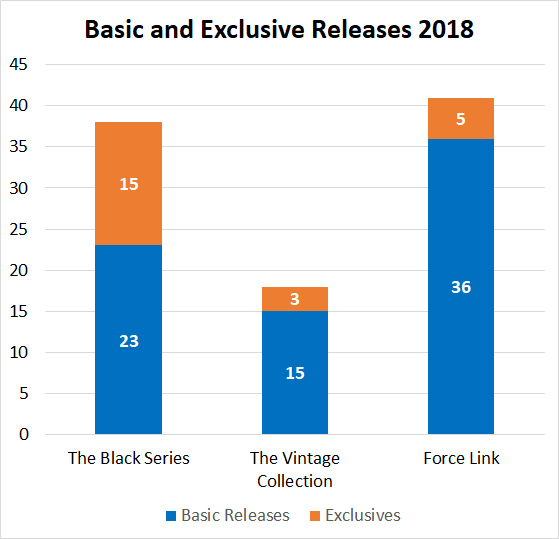 With all the bar charts on the table we can now discuss a few things. First of all, we can easily see that TVC saw a rather limited number of releases. Going by numbers and sheer variety of releases it’s apparent that the Force Link (5POA) figures and sets are a – if not even the – mainline. However, the Black Series almost has the same total number of releases in 2018 as the Force Link line. What sets the Black Series apart from all the other lines is the staggering number of exclusive sets! More than 39% of all releases were exclusives!
Now, as annoying as that may be for many collectors, I also believe it is a good sign. A retailer must have a vested interest in selling an exclusive Star Wars figure, they must believe they can sell enough figures to make it worth their while. In this regard the high number of exclusive Black Series is good news for fans of the line, because it means interest in the line is unbroken by retailers. That’s at least my interpretation. Hasbro has repeatedly said that they love exclusives and that it gives them a chance to release figures that otherwise could not make it into the line. And 2019 will probably continue in that vein. So expect a similar number of exclusive figures!

TVC’s very limited number of releases and very few exclusives however, probably mean that retailers (and maybe Hasbro) were cautious. Remember, Hasbro can only produce what retailers actually want from them, vendors solicit their products, so there most certainly was a dialogue between Hasbro and retailers before the total number of figures and vehicles for TVC in 2018 was agreed upon.

And even though many here don’t like the Force Link figures, they do well, industry numbers by the NPD Group (at least for the first half of 2018) support that. Force Link figures belong in the “Youth Electronics” segment and they were one of the toylines behind the huge growth in that segment in the first half of 2018. Numbers for the full year are not available yet, we will certainly discuss numbers for the full year once they become available!

In my opinion the number of about 40 (new) figures/sets in a year is ok. And the performance of TVC at retail will certainly influence the number of total releases in 2019 and beyond.

But even though we got a good (if you are a Black Series or 5 POA collector) or not so good (if you are a TVC collector) selection of figures in 2018, the sales figures for Star Wars toys in 2018 will be yet another disappointment for Hasbro. It could very well be that sales are down by more than 25% for the full year. And it’s apparent that a significant number of unsold sets ended up at stores such as 5 Below or Ross this year. Hasbro (and retailers alike) most certainly were caught on the wrong foot by the very bad performance of Solo in 2018 and overestimated demand for Star Wars merchandise.

And that brings us the one new Star Wars movie we had in 2018: Solo – A Star Wars Story. Much has been said about the movie. No need to reiterate it all here. What remains is Solo’s performance at the box office and home media market.

There are no other words for it: Solo was a major disappointment at the box office for Disney, especially considering that Disney spent about $350 million on the production and marketing of the movie. Solo will be the first live action Star Wars movie not to be the number 1 (or at least number 2) movie at the yearly domestic box office. It barely makes the top 10 in North America.

But even though it was a bad year for Star Wars in general, there were still some really great figures we could add to our collections. Black Series and 5 POA collectors certainly had more reasons to be happy than TVC collectors, and 6 inch collectors also have Japanese imports, which we did not discuss here, to make them even more happy, but TVC collectors scored a big win in February 2018 when the Barge was successfully funded on Haslab! And so I believe that there’s reason to be happy for almost everyone, other than maybe TVC collectors outside North America who might never be able to buy the Khetanna.

I will close this article with an outlook on 2019: and here I think that Star Wars will be in much better shape next year. When we look at upcoming action figure releases all the announced figures are winners. And on the entertainment front not only will we get three new Star Wars series on streaming, Episode IX will also most certainly be a bigger box office draw than Solo was. It remains to be seen though if IX can win back the hearts of all those fans who feel left behind by the sequels so far.