I am really busy playing Red Dead Redemption 2 these days. Which is why I have little time for other things at the moment.
But while playing RDR2 or other, similar open world, story based single player games such as Assassin’s Creed Odyssey, Assassin’s Creed Origins, Witcher 3 or Tomb Raider (the reboot) one thought always crosses my mind: why are there no single player, open world, story focused Star Wars games? Click through for some thoughts! 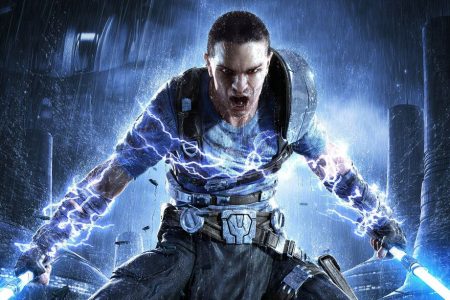 It is, more or less, a good time to be a Star Wars fan. Sure, not all things are loved equally. We argue about the sequel trilogy, we wonder why Solo got made and even though a fine movie by itself flopped spectacularly at the box office, but overall we have more Star Wars content than ever before and it is a simple fact that most of this new entertainment is well liked, maybe not that unanimously by hardcore collectors, but Star Wars fans as a whole mostly like the new entertainment.

And in 2019 things will get only better. We will get two new live action shows, a first for Star Wars, The Clone Wars will get a final (?) season, a dream come true for all TCW fans, and for the kids we have Star Wars Resistance.

But in one area Star Wars is seriously lacking, in my opinion, that is in the games department. Sure, we have EA, who have an exclusive deal with Lucasfilm. But all they give us are games focused on multiplayer with a tacked on, very short single player campaign, while ok in itself, still not really breaking any boundaries or game changing.

In the past few years vast open world games, focused on single player campaigns, heavily focused on story and sometimes taking dozens of hours to finish have won the hearts of gamers all over the world.

And the video game market is huge, it compares in revenue with Hollywood movies. And the rare AAA game title, the latest example Red Dead Redemption 2, can actually take in impressive amounts of money. RDR2 made $725 million within 3 days of its release. 17 million copies where shipped to retailers, these are better numbers than even The Force Awakens ever had. GTA V made several billion in revenue (more than 6 billion USD). These games, while focused on single player in the campaign, often also have an online multiplayer component, so these games combine the best of both worlds.

So where is the open world, story based Star Wars RPG/adventure in the style of RDR2 or Witcher 3?

The possibilities are endless. The game could go in any direction…

a) we could get a game based on Luke sometime after ROTJ but long before TFA, and while Mark Hamill doesn’t necessarily look the part anymore, he could always voice his video game counterpart. The game could feature any of the OT characters, voiced by the original actors, when possible. Which is something EA tried to do but it was more or less episodic in nature and a very, very limited experience. It was mostly about shooting things.

b) the game could explore a new time period (similar to what KOTOR did) and give us all new characters, something that could work even better, because that new character could be someone you identify with and someone you can custom create from scratch, at least you could play as either male or female

I believe that Star Wars has a lot of appeal to gamers. And even though EA hates single player games and are heavily invested in multiplayer, lootboxes and microtransactions there’s still a LOT of money to be made with a AAA single player game. RDR2 and various other titles are testament to that.

Also, an epic story focused Star Wars game could tackle several problems some of the fans have: that of character choice. There are games like RDR2 where you play a pre-made character, however, other games such as Assassin’s Creed Odyssey or a somewhat older title like Fallout 4 give you the option to either choose to play as male or female or to create your own character from scratch.

You want a female driven story? Play as a female. You want to have a male hero? Play as a male.

In my opinion, playing such a game can be much more immersive. A movie is static, it always provides you with the same experience, it’s always the same story, it’s always the same characters, with a game you experience the story first hand and all the really successful AAA open world games always give you some choice, you can be good or evil, there usually are several endings which give you a high replayability factor. This non-linearity can be a real advantage.

So while we have lots of new Star Wars content, this content is still static, movies, shows, cartoons. This is good and fine, but Lucasfilm is missing out on a fully immersive, open world, story focused Star Wars game in the vein of RDR2, Witcher 3 or “open universe” game such as the Mass Effect series which let you fly through the galaxy.

Would you be interested in a state of the art single player Star Wars game, story based and either set in an established time period with some well known character(s) or offering something new with all new characters? Or do you prefer the more passive consumption of movies and shows where you just sit back and watch the screen?

My personal observation is that in the past few years I have come to like story based video games much, much more than movies or tv shows. Games such as “Detroit: Become Human” or “The Last of Us” on top of the open world spectacles mentioned further above can provide you with a much more engaging experience. You get to be the character(s) instead of just watching something at home or in theaters. And when something happens to that character you feel it much more.

I would hope that someone other than EA gets the license to produce Star Wars games, even Ubisoft, a company not all that well liked either, would be a much better choice, they have at least proven time and again that they can make some very fine single player games. I think EA has the wrong approach. And it’s curious that Lucasfilm is missing out on the sheer endless possibilities of video games that are driven by story and give fans the chance to actually “live” in the Star Wars universe or experience it first hand.

In my opinion the future of Star Wars entertainment needs to be much more interactive. A movie can give you a few hours of joy, a game can provide you with lots of fun for weeks or even months.

a) accept the saber and ignite it

b) toss it over your shoulder

Fun fact: a game such as “Detroit: Become Human” even tells you how other players chose by giving you a percentage and shows what other decision trees you missed out on (without giving away what these other decisions are, so you have a reason to replay). I wonder what the statistic for this particular TLJ scene would have shown us.

I believe many fans could have been much happier.