Every Time It Seems Things Can't Get Any Worse, They Do

Everybody hates Chris, but no one more than me today. My good friend relayed to me in a conversation yesterday that wave 1 is hitting en masse all over Walmarts and it’s taking over the country. I had no clue because I am indifferent to Star Wars collecting at the moment. Also, I can’t remember the last time I entered a Walmart store, So my insatiable curiosity got the best of me and would only be quenched with a (gasp!) toy run. Well, to my utter disgust, wave 1 was indeed falling off of the pegs. There are so many figures hanging now that it looks like how the Solo line look launch should have looked in April. AND IT’S DECEMBER! (more….) 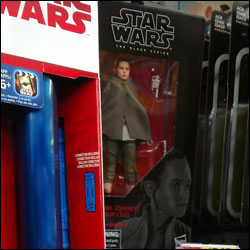 Everyone, The Vintage Collection is OVER! Yeah, you can say that’s dramatic. I don’t care. But you might as well stick a fork in it. As far as the eye can see, there are only “less than you can count on one hand” all-new sculpts coming, and the incessant straight repacks (oh, I’m sorry – some with “photorealistic” updates) by more old repacked figures will drown the chance of you seeing the new figures next to never unless you order whole cases online. And if wave 1 is clogging the pegs now, well, every future wave is, well, screwed.

We should have known it was the “end” when most Walmart stores saw wave 3 hit out of the blue before wave 1 and wave 2. Now the backlog is coming. And the LAST thing that the “currently unaffected by the retail apocalypse” Big Box stores need to see right now is more The Force Awakens characters. Star Wars collectors with spending money DON’T want these figures.  But this is the tip of the iceberg.

Exclusives are lost and not-often found. The volume of peg-warmers of certain characters is unlike anything we’ve seen in the recent past. And the lack of excitement for the Star Wars brand isn’t able to keep the momentum going. People are bored with the hobby. Heaven help us all.

Make The Vintage Collection an online/HasLab exclusive where the actual purchasing collector of this line choose what characters they want to see made. Vet us. Charge us a membership fee to vote (with a FREE action figure to set off costs) to ensure you’re getting the most-accurate feedback you need to choose the right characters to make. You do have to wonder why there is so much internal transition happening right now at Hasbro. Things (from a retail perspective and toy line perspective) are a devastating mess. Rant over.