Hey Hasbro! An actor from Return Of The Jedi emailed us and let us know you’re not making enough aliens from Jabba’s palace. The neglect stems from the lack of merchandise and you can be a big part in fixing that. Can you change that for them (and of course us?) (more….) 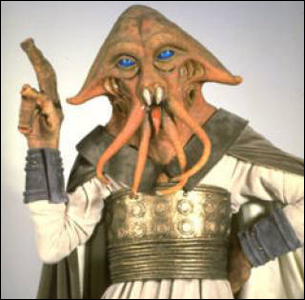 There are many rewards generating out of our run of vintage Kenner Research Droids Reviews. The response from readers is fantastic. We love hearing you recount your stories and how much the original Kenner Star Wars line meant to you as a child and how it continues to play a special part in your lived today. It’s also helped me to realize further what makes me a Star Wars fan and how thankful I am that I was introduced to Star Wars during the roots of its legacy. Because if I were to judge the hobby today by what I periodically see on Twitter and YouTube, I’d think the whole community lost its mind. But that’s a story for another day.

The run of vintage Kenner Research Droids Reviews has also grabbed the attention of Gerald Home, the actor who played Squid Head (or Tessek) in Star Wars Episode VI: Return Of The Jedi. He sent me a lovely email about my review on 1983’s Return Of The Jedi Squid Head. (See all of our vintage Kenner RDRs HERE.) I asked if I could share it with my audience and he approved, so here it is.

A Star Wars fan sent me the link to your Squid Head action figure review, and I’m writing to say how much I enjoyed it, and to thank you for liking it. I share your wish for a new Squid Head figure – we performers who played creatures in Return of the Jedi feel very neglected regarding updates and merchandise.

All the best, and congratulations on your review.

I wanted to share the email because it provides evidence that the actors who played the many unforgettable characters in the Star Wars films are a bit disappointed that Hasbro hasn’t updated their characters in the basic figure lines either. It’s not just the collectors. It’s not only 3.75″ fans or 6″ fans. There is a dreadful lack of Original Trilogy aliens across the board in Star Wars collecting today. In fairness, Hasbro did clearly state that a reason they brought back The Vintage Collection so they could start adding creatures from Jabba’s palace and Chalmun’s cantinas back into the line. We see that happening slowly, but they need to step it up and make them more of a focus. The actors who played the characters feel the same way!

I want to close these thoughts out with thanking Gerald Home for writing to me and expressing his feelings about the character he played in Return of The Jedi. And I also thank JTA reader Paul Rowley, an extra big fan of Gerald Home, for alerting him to our column which generated this email exchange.

To Hasbro, please get cracking and updating major alien characters like Squid Head in ALL of your scales. The performance of the Gamorrean Guard and the addition of Yak Face in Jabba’s Sail Barge should prove to you how important they are to collectors. Also in fairness to Hasbro, Gerald Home is disappointed in the general lack of merchandise across all licenses. But obviously, Hasbro is one of the most important in this regard.

To our readers, feel free to let Hasbro know what characters you want to see updated in 3.75″ and 6″ scales.