If you saw the arresting and spectacular final “Rick Grimes” episode of The Walking Dead last night, you were officially introduced to actress Cailey Fleming (although she did appear in a couple of “flashback” episodes earlier in the series). Interestingly, Cailey played “young Rey” in The Force Awakens flashback scene and is now promoted to series regular in The Walking Dead as Judith Grimes as the series time jumps six years ahead. The Walking Dead has resurrected itself to its glory years, and last night’s episode proved that. Too bad stupid Chris won’t care. 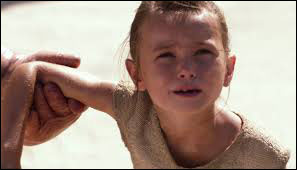