Hasbro's QIII/2018 Financial Results Are In

Early this morning Hasbro released their financial results for the 3rd Quarter of 2018. As expected Hasbro is still struggling with the demise of Toys R Us. But what’s especially troubling is the steep decline in the Partner Brands segment. Click through for all the details!

Hasbro is probably not so happy

Hasbro’s revenue in Q3 2018 was $1.57 billion, which is down 12% from Q3 2017. Hasbro cites the loss of Toys R Us, a rapidly evolving retail landscape and clearing through retail inventory as primary reasons for the decline.
Hasbro is struggling in Europe. Revenues in Europe are down 29%. TRU’s demise in the UK and the costs of clearing through retail inventory are also cited as primary reasons for the steep decline. 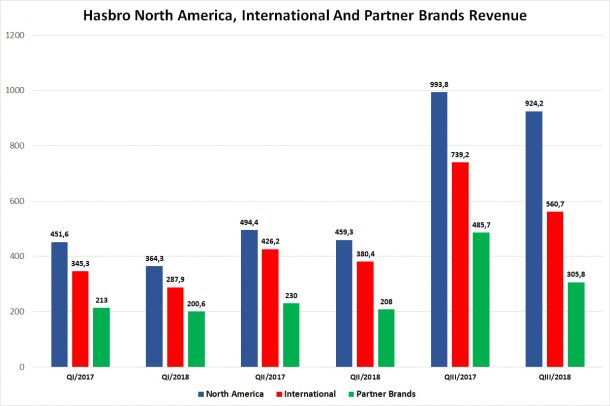 Overall, the international segment is down 24% in the third quarter. In North America Hasbro fares better and revenue is down 7%. According to Brian Goldner Hasbro was not able to meet demand by new retail partners in Q3. TRU used to order product earlier for the holiday period, while the new partners ordered only late in Q3, much closer to the holiday period which seemingly surprised Hasbro somewhat. So about $50 million of Q3 orders only shipped in the first week of Q4.
Net earnings are almost flat, they are $264 million in Q3 2018 and were $266 million in Q3 2017, this is mostly due to an overall lower tax rate, according to Hasbro.

But of particular interest to us Star Wars fans are Hasbro’s Partner brands. And here things don’t look too pretty, actually, they look quite bad. The Partner Brands see yet another decline in revenues.

To illustrate the effect of TRU’s demise and various other factors let me show you a graph that directly compares the quarterly results from 2018 and 2017 (click the bar chart for better readability):

This chart directly compares the quarterly results which makes it easier to see how the various segments compare with the quarter from the previous year. As you can see the it’s especially the international segment that saw decline in Q3/2018. And Q1 was the quarter that was most affected by the demise of TRU for the North America segment. The Partner Brands are struggling, each quarter saw a decline in revenues and the decline is only getting worse. To further illustrate this look at the next graph that shows you the quarter on quarter Partner Brand growth (the lack thereof): 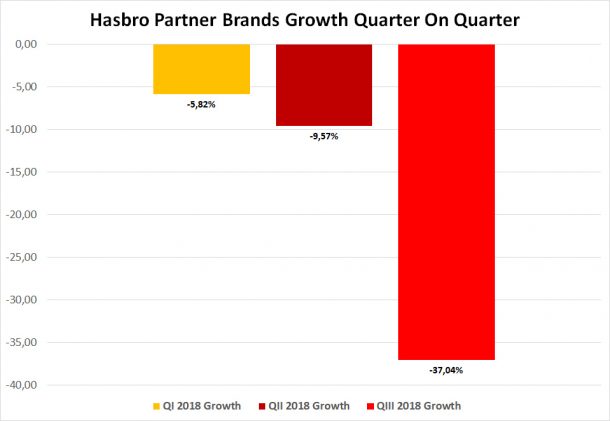 There is no other way to put it, the decline in Q3 2018 is huge and without a Star Wars movie coming in December Q4 results may even be worse for the next quarter. However, and this is something very important: Hasbro didn’t give any numbers whatsoever regarding Star Wars. Actually, in their presentation Star Wars is not mentioned once. Hasbro merely stated in their presentation that growth from Marvel and Beyblades was “more than offset” by losses in other partner brands. They used that exact same phrase for their Q2 and Q1 results as well.

Therefore we can only speculate on the performance of Star Wars for Hasbro. We can only say with certainty that Star Wars revenue declined and that Marvel is still growing, since this is the only thing Hasbro confirmed.

While Star Wars is declining there’s a good chance things will improve in 2019 when the marketing for Episode IX starts. And once The Mandalorian and The Clone Wars air on Disney’s streaming channel and get their toylines things might pick up even more again. But as of now we can only say that Star Wars toys revenues are shrinking, and they have been shrinking for quite a while now.

Also: Hasbro needs to do something about Europe, and fast. Improvements are promised for 2019. The brand absolutely needs more presence at retail again and better prices would also certainly help. The Star Wars shelves have been shrinking continously and various stores no longer sell any Star Wars toys at all, at least here in Germany.

So, what are your thoughts? Do you think Star Wars will gain momentum again in 2019 or do you see this as the beginning of the end? I strongly believe that while 2018 may not be a good year for Star Wars toys (without knowing any actual numbers) the brand and the toys have a very strong potential and with IX things will undoubtedly look better again. It is the final part of the trilogy, after all. And the upcoming shows might give the toyline a boost too.