Star Wars user ratings have been debated for quite a while now, especially following the release of The Last Jedi in December 2017. Now that Solo came and went I think it’s a good time to look at how Star Wars fares on IMDB, Rotten Tomatoes and Metacritic, the three most popular sites for movie user ratings. I will also look at the user demographics – how does each age group rate the movies? Some interesting observations can be made. So click through for some lovely bar charts, I know you love them!

Before I show you a few charts and discuss them a few caveats: IMDB, Rotten Tomatoes and Metacritic are not necessarily representative of Star Wars moviegoers as a whole. For example, women are vastly underrepresented on IMDB (the only site with a demographic breakdown of votes). About 40% of Star Wars moviegoers are female, but less than 15% of them leave votes on IMDB for a Star Wars movie. What these sites may be an indicator for is engagement, how much any certain group feels compelled to leave a vote. However, using other sources about the demographics of Star Wars fans a few things can still be deduced with at least some certainty. But nevertheless, keep in mind that all of these movie sites are each their own microcosmos.

With that out of the way I want to take a quick look at the Star Wars user ratings. I divided the ratings into “positive”, “mixed” and “negative”. Both Rotten Tomatoes and Metacritic consider any rating 7 and better “positive” (Rotten Tomatoes has a 5 Star system and considers a vote of 3.5 or better as positive), a rating between 4-6 is “mixed” on Metacritic and anything 3 and below is “negative” on Metacritic. So I used that to divide the ratings on IMDB to make their ratings comparable with the other sites which don’t offer a detailed breakdown of votes.

So what are the ratings? 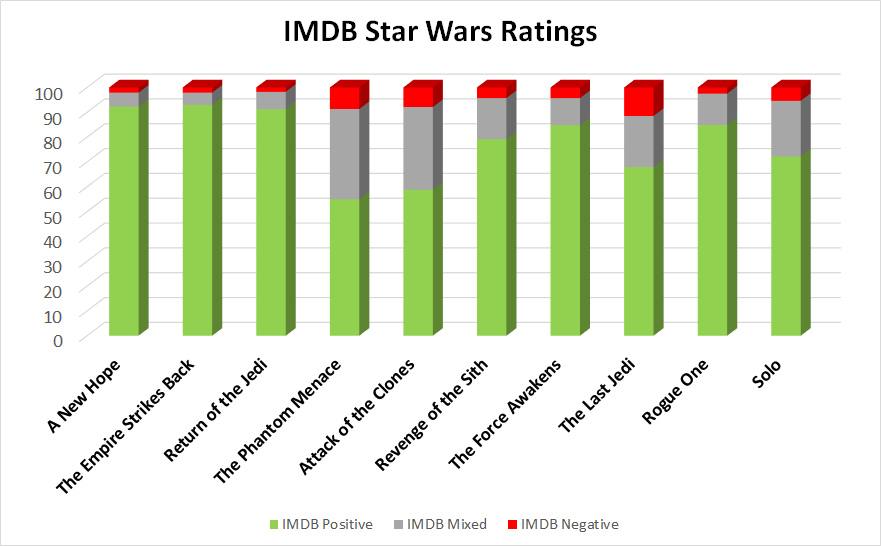 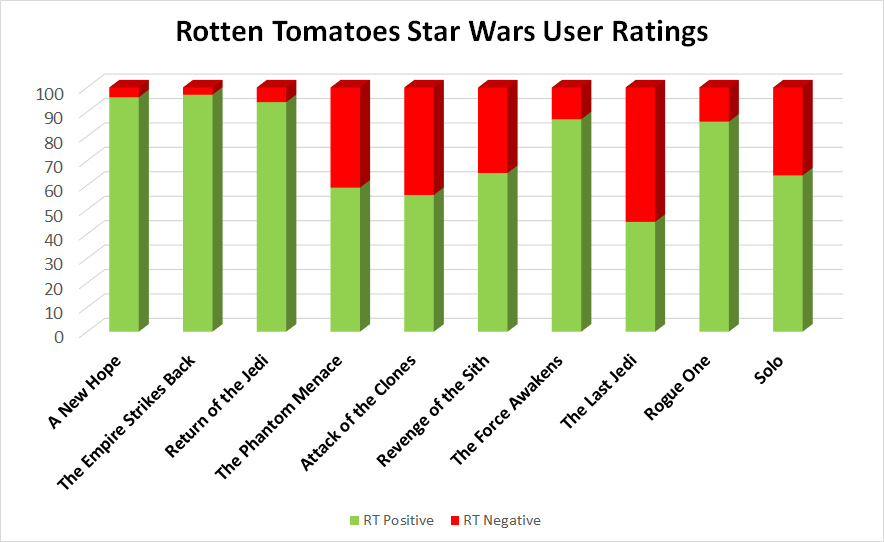 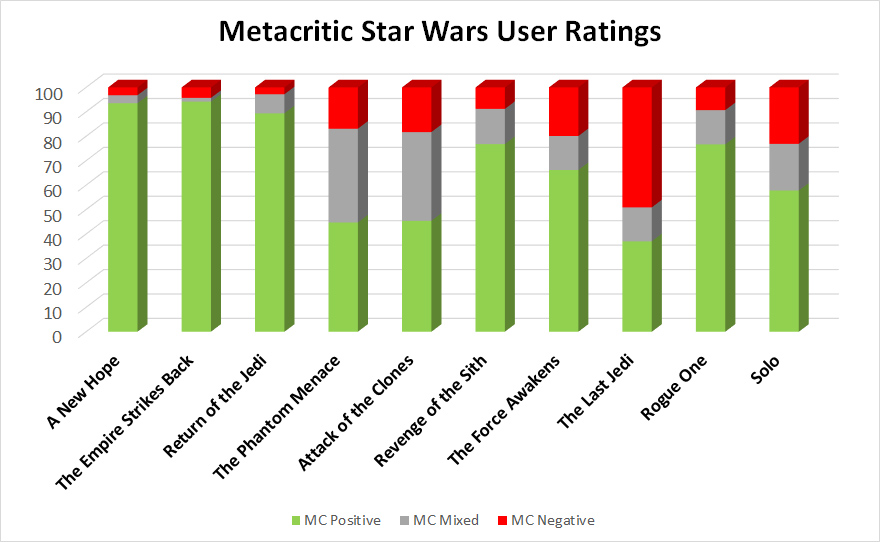 As you can see (and JTA had an article covering that fact before) the user ratings are more or less in very good alignment. As was observed before The Last Jedi is the only real outlier with significantly worse ratings on Rotten Tomatoes and Metacritic. Since Rotten Tomatoes merely has their Popcorn bucket to indicate a positive or negative user rating the “mixed” category is absent.

IMDB has the largest user base, Rotten Tomatoes has significantly fewer user ratings and Metacritic has very, very few user ratings, sometimes only little more than a few thousand votes.

Across all sites one trend can be observed: the original trilogy is universally loved by the users who vote there. The prequels are struggling with only Revenge of the Sith elevating itself above the other two prequels. But even the prequels have few really negative ratings, their issue is the high number of mixed opinions. The Disney era movies fare considerably better than the prequels but worse than the original trilogy. All of this should be no real surprise.

Of note is that Solo, while not a huge success at the box office, does have resoundingly positive user ratings. This aligns pretty much with general feedback from fans who actually saw the movie. It’s just that many people decided not to see the movie. But the ones who did see it liked it pretty well.

But things get really interesting when we look at the age distribution of user ratings. For this I look at IMDB since it is the only site that shows the demographic breakdown of ratings. And to get a feeling for where Star Wars stands I also looked at a handful of other movies. Let me show your the bar chart (click on it for better readability): 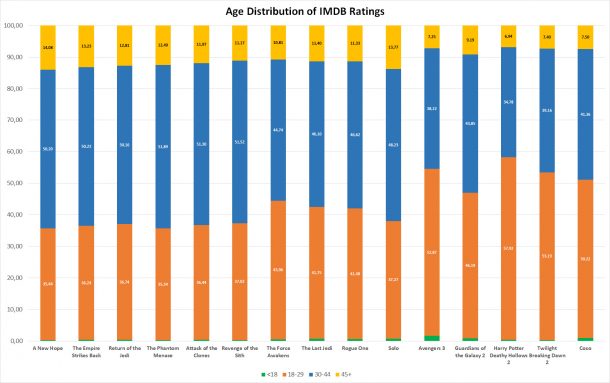 Please click the graphic to see the large version

Once again, IMDB is not necessarily representative of Star Wars moviegoers as a whole, we merely look at all those who a) frequent IMDB and b) feel compelled to vote. However, there are outside sources for the demographic makeup for Star Wars moviegoers. For example, according to Nielsen, the average Star Wars fan in the USA is 17% more likely to be aged 30-44.

We can see that the majority of users who rated a Star Wars movie on IMDB are older than 30. People younger than 18 are virtually nonexistant for Star Wars on IMDB. But this is true for virtually any other movie too.

Since other sources corroborate that the average Star Wars fan is indeed older than 30 (more likely to be older than 30, to be precise) we can assume that this is also reflected in the user ratings on IMDB.

The only Disney era movie that shows a very similar age distribution on IMDB as the OT or PT is Solo. We could assume that Solo didn’t really get the attention of the 18-29 demographic. Also, the 45+ demographic is back up to OT levels. Even though IMDB is not necessarily representative of all moviegoers as a whole we could at least assume that the voter demographic on IMDB is correlated with the actual moviegoing public. And from that we can come to the conclusion that Solo was such a disappointment at the box office because it was mostly the OT and PT generation that went to see the movie and considerably less people younger than 30.

The somewhat skewed Star Wars demographic shows itself even more when we look at some other movies.

Avengers 3 has a lot more people younger than 30 voting on IMDB. The last Harry Potter movie (a franchise aimed at families and kids) has almost 60% voters younger than 30. I also looked at a Marvel movie very similar in tone and setting to Star Wars, Guardians of the Galaxy 2, the GOTG movies also bank heavily on 70s/80s nostalgia, given the background of Star Lord and the soundtrack throughout the movie. And GOTG 2 comes close to Star Wars, but even this movie has more people younger than 30 on IMDB voting for it.

The question is: does Star Wars appeal to enough younger people? And if not: why? And: what can Disney do to keep Star Wars relevant in years to come? What happens if the 45+ demographic stops going to the movies? And then the demographic 30-44?

Of course, as noted before, IMDB has virtually no people aged 18 or younger voting on their platform. The actual Star Wars fan demographic is not as skewed as on IMDB. But opening night statistics for The Force Awakens show that the movie had a much higher number of fans aged 30+ seeing the movie, compared with a movie such as Jurassic World. And the Jurassic Park / World franchise is also banking on nostalgia for the original movie from the early 1990s. But it has many more younger people attending opening night.

So here we are: is Star Wars an aging franchise? Destined to fade with time if newer generations fail to embrace Star Wars as much as the OT and PT generation did? Was the attempt by Lucasfilm to appeal to new and old fans at the same time with giving single OT characters some spotlight in the sequels, but placing the real focus on new characters not the right approach? Would it have been better to introduce all new characters, similar to what Jurassic World did? Or should Lucasfilm have tried to forget about new fans and give the OT/PT generation a movie they could universally love, with the old characters receiving the focus with only a few new characters added?

In my opinion, if Star Wars wants to stay relevant in years and decades to come, the franchise needs to find a way to better connect with younger people. The Marvel movies, similar spectacles and also using characters that were originally created in the 60s/70s or 80s, fare much better here.

What do you think? What should Lucasfilm do? It’s especially worrisome, at least as far as I am concerned, that Solo is the least popular Disney era movie in the 18-29 demographic, based on IMDB user ratings (which have their caveats), maybe heavily reyling on nostalgia is not the way to go forward. It’s time Star Wars gets all new characters, all new settings and leaves the OT/PT and possibly even ST time period behind. Old fans would still return, I think, because it’s Star Wars, but new fans would get a chance to start fresh without any OT characters in the mix they have no real connection with.
TV/Streaming shows can still explore these familiar time periods, there are many stories left untold, but the movies should move on or else Star Wars might slowly fade away.  Or maybe you disagree completely and you think I’m completely wrong here? Leave your thoughts in the comments!