JTA reader Kieran C. had the opportunity to talk to Steve Evans at NYCC. He wanted to know if Disney’s royalty fees might prevent Hasbro from doing more TVC figures. It has been speculated that production costs for TVC and the Black Series might basically be the same but that TVC has smaller margins, which results in fewer new figures for the line. Steve Evans’ answer however paints a somewhat different picture. Click through for what he said! 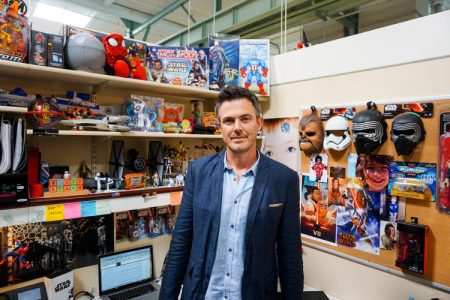 When asked if royalty fees are responsible for the relatively few new TVC figures Steve Evans replied that royalty fees have nothing to do with it. They are trying to balance the two lines, but that more people are interested in the Black Series than TVC.

So this is the reason why the Black Series gets more figures: Popularity and demand.

JTA Reader Kieran C. also observed that during the Hasbro Star Wars NYCC panel more people left the room after the Black Series announcements than stayed for the TVC related announcements. Which implicates that even the various media outlets, websites and fans that were present are more interested in the 6 inch scale figures.

Hasbro has repeatedly said that the Black Series is their bread and butter line, actually, as recently as NYCC.

Now, make of that what you will, but this is what Steve Evans said and what reader Kiercan C. observed during the panel. Thanks to Kieran for relaying that info to us!