S.H.Figuarts released their Episode III Anakin Skywalker figure a little more than a week ago. After some delays (FedEx took their time) the figure finally found its way to me. Click through for some general thoughts about the SHF Episode III Anakin action figure! 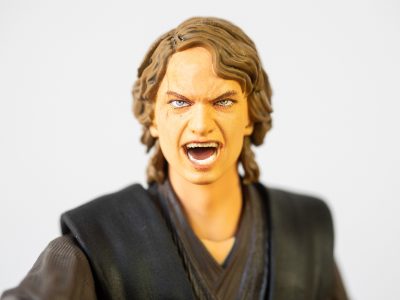 Episode III Anakin is the second Anakin Skywalker figure by S.H.Figuarts, Episode II Anakin was released in 2017, but now we get to evil and angry Anakin in his Episode III costume. His frenemy, Episode III Obi-Wan Kenobi was announced a short while ago and pre-orders are up, he will be released at the end of February 2019.

But today the spotlight is on Anakin.

In the box you’ll find:

And this is Anakin straight out of the box: 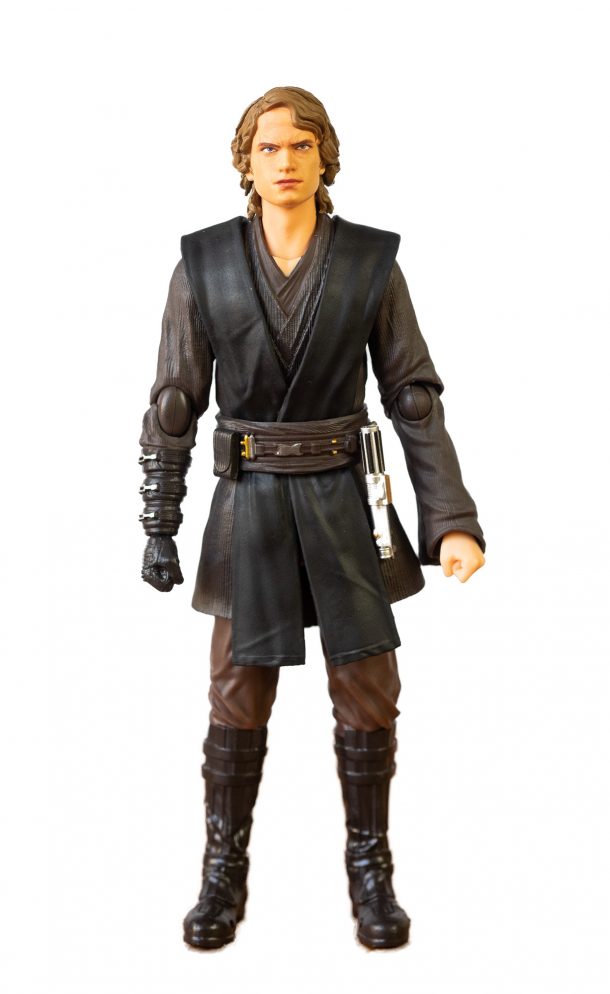 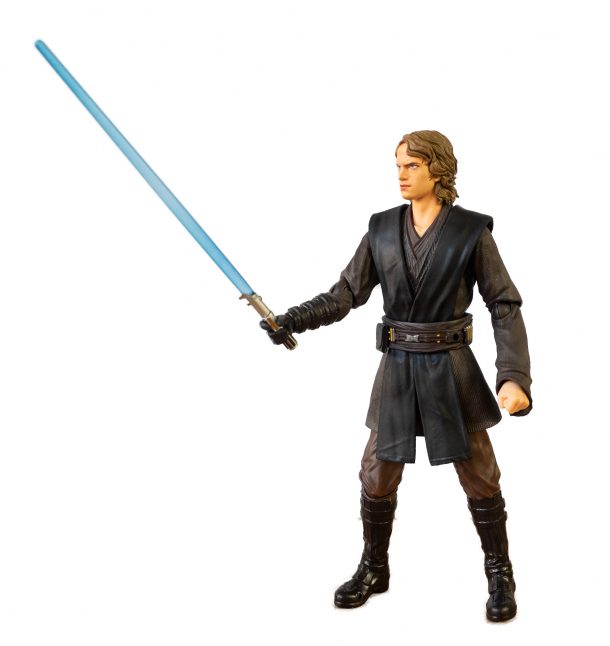 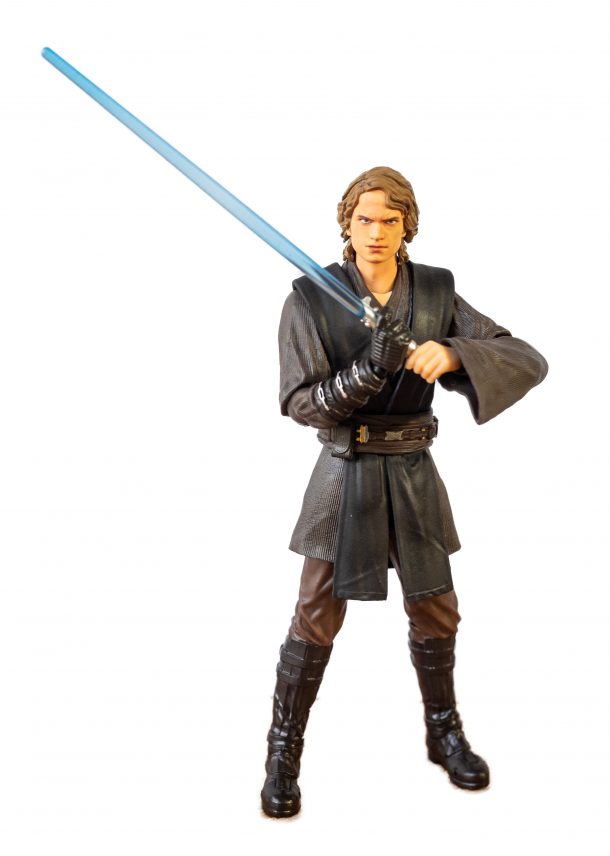 Two-handed poses are easily achievable, but somewhat limited by the sleeves

Overall the figure feels like yet another high quality SHF offering. The plastic is very sturdy, not rubbery at all. The joints all have very fluent motion, you can easily achieve natural poses with this figure. Anakin’s robes have very fine detail, click on any of the photos to see the lines on his tunic.

But what about the likeness? I think the likeness is pretty good, especially considering the alternatives (more about that soon), but it’s not perfect. Here’s a comparison with a screenshot from the movie: 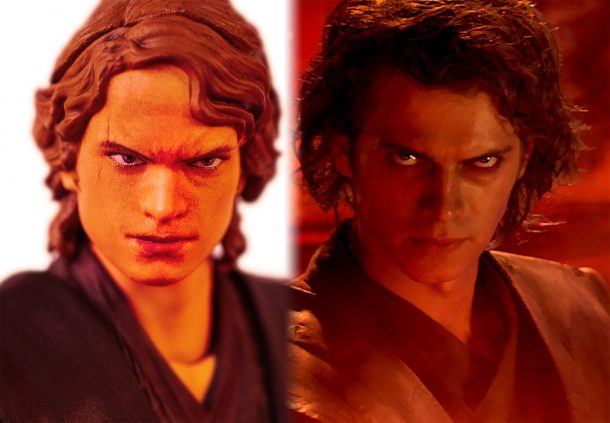 I think SHF may have actually used this photo, or at least the duel on Mustafar for this headsculpt. And as you can see it does look like Anakin but the mouth appears to be somewhat too wide and the lower jaw is somewhat too broad, Hayden Christensen’s jaw seems to be a little bit more angular. I tried to match the colors in post, I didn’t have the proper lighting to actually recreate the moody lighting in the movie. But I tried to match the angles as closely as possible.

But how does Anakin compare with his Hasbro counterpart which will be rereleased with a photo real head in 2019? 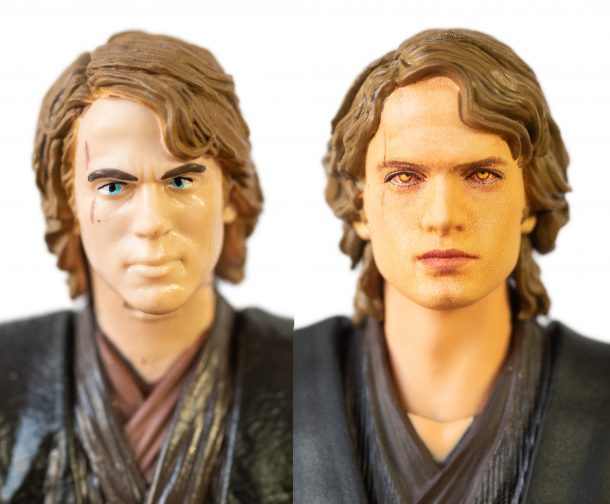 To the left Hasbro Anakin, to the right SHF Sith eyes Anakin

The Hasbro figure looks terrible. Even the photo real version shown off at NYCC only looks somewhat better. The paint job may look a lot better actually, but the sculpt seems to be very off here for the Hasbro version. SHF Sith eyes Anakin has a better likeness than the angry staring contest Anakin, in my opinion. Unfortunately, one pupil has been applied off-center, but you only really see that in close-up photos, this detail is virtually impossible to see with the naked eye.

And here’s a height comparison between the two: 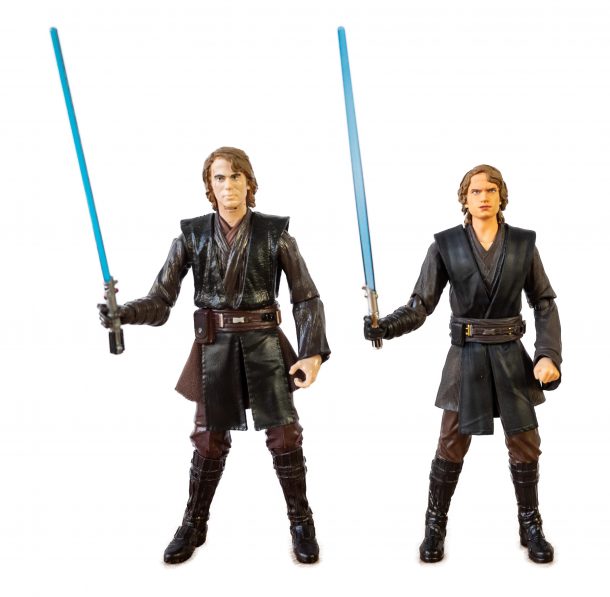 SHF Anakin is a lot shorter than the Hasbro version. Actually he’s even shorter than SHF Episode II Anakin, who was somewhat too tall perhaps, however.

SHF Anakin does have the drop-down legs to improve articulation and to also let him gain some height. With extended legs SHF Anakin is virtually the same height: 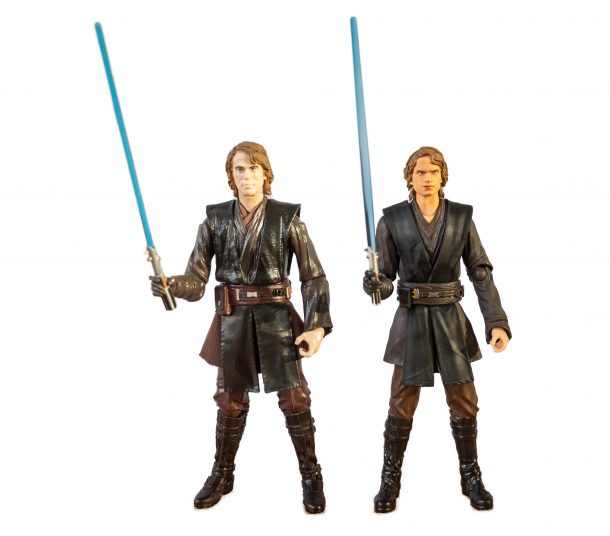 With extended legs height is pretty much the same

And let me tell you one thing: handling the Hasbro version reminded of how terrible the Black Series could be only a few short years ago. Paint apps are atrocious the lightsaber is a rubbery mess, it’s always warped, no matter what, I tried to straighten the saber for the photos but you can see it’s all warped and crooked. The actual body is ok, but articulation of the Hasbro version is woeful, the elbows can’t even bend 90 degrees. S.H.Figuarts Anakin can bend his elbows about 120 degrees. Also, the material Hasbro used does feel a lot cheaper than what SHF is using. You pay for what you get.

But what would Anakin be without his best frenemy for life – Obi-Wan: 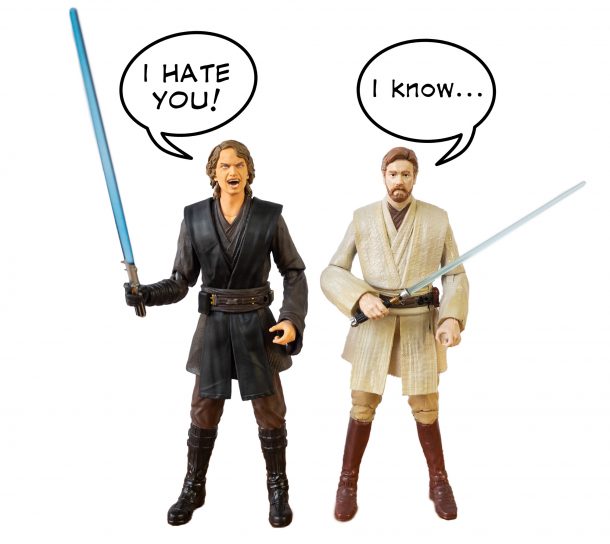 This is Anakin with extended legs. Perfect height. But Obi-Wan looks very sad and very dated next to SHF Anakin, I recommend you either wait for the photo real variant, that sweet Clone Wars Obi-Wan for a head swap or you buy the SHF Ep. III Obi-Wan to keep Anakin company.

All in all I think that S-H.Figuarts Anakin is a very fine figure. It’s not perfect. Likeness on the angry staring face is ok, but not entirely accurate. For some reason the Sith eyes variant does have a better likeness. I also really like the angry shouting face. It’s very intense but I believe the likeness, and the emotion, is pretty good here. It is commendable that S.H.Figuarts is trying for some alternate headsculpts that are really different and convey more intense emotions. The years of less stoic and more stoic faces seem to be over (think Mace Windu or Obi-Wan). It may not always be something you like, but with three faces to choose from you can pick the one face you like best.
One final thought concerning the likeness: somehow I get the feeling that the angry staring face does have some qualities of the Clone Wars cartoon model used on the show. In the show Anakin also had a somewhat broader lower jaw. It seems the sculpt combines both the actor and the cartoon model.

When you look at all three faces you realize that SHF didn’t give Anakin one single neutral non-Sith face. It appears to me that all three faces come from the duel on Mustafar (the Sith eyes version maybe from the temple raid on Coruscant). I would have liked to also get a more neutral, more friendly light side Anakin face from the first 2/3 of the movie.

Also, Anakin comes without any relaxed hands. He only has fists, lightsaber holding hands and Force wielding hands, no relaxed hand for Anakin. But he was probably not really relaxed on Mustafar.

My verdict is that this is the best 1/12 scale Anakin Skywalker figure. No contest. Photo real or not, the Hasbro version is sad in comparison. It lacks articulation, likeness is worse and unless Hasbro gives Anakin a better lightsaber, the hilt is a rubbery mess that will warp when you merely look at it. All the details on SHF Anakin are incredibly crisp. And as usual, all the close-up photos don’t do the figure real justice. As with any photo real figure the effect comes together when you look at it with your own eyes. In hand, on your desk, on the shelf, the SHF Anakin figure looks very lifelike and likeness, especially the Sith eyes face, is phenomenal when viewed with your own two eyes.
And I also say this: the likeness is better than what Hot Toys is giving you for their upcoming 1/6 scale figure. Just check out photos of Hot Toys Anakin to see that their likeness is very off – at least in my opinion. 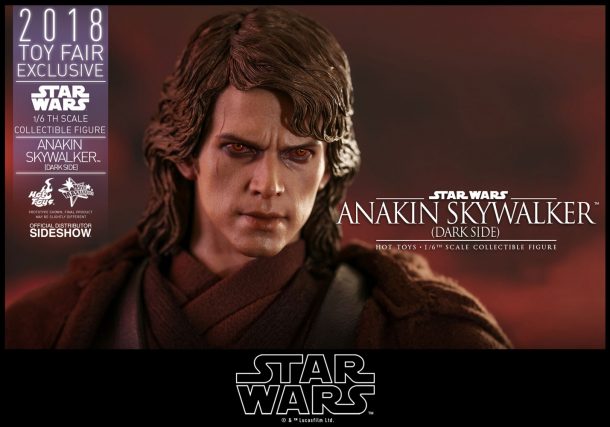 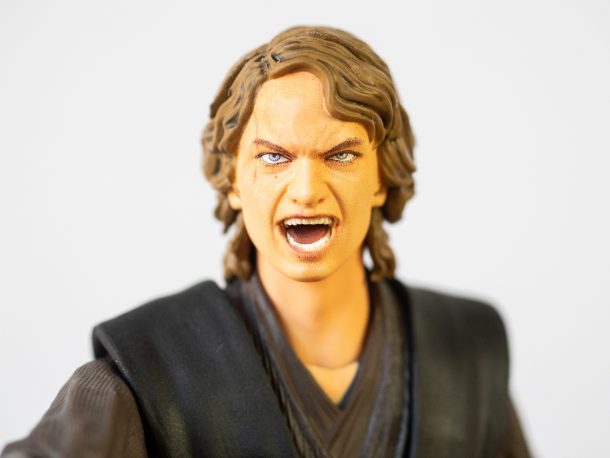