The Last Jedi is currently the top selling Blu-Ray in the USA. Perfect time to take a closer look at Star Wars home video sales. And a closer examination shows some puzzling numbers that may warrant further discussion. Click through for more! 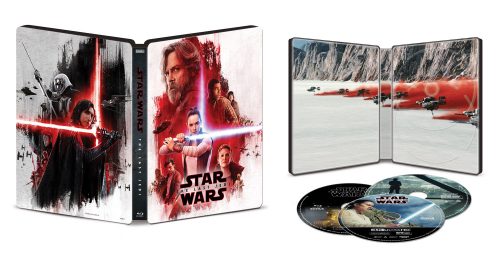 The home video market in the USA is in decline and has been for a few years now. With new technologies taking over physical disc sales are slowly, but inexorably dwindling.
This makes comparing home video releases from different years somewhat difficult. In 2017 home video sales declined 14.7% and in 2016 it was almost 10%. So the best selling disc of 2018 will most likely sell less copies than the best selling disc of 2017. Thus, comparing these numbers without some context is useless.

For this article I looked at the top 10 domestic (USA) home video releases in 2016, 2017 and 2018 separately. 2018 only has premilinary numbers of course. I analyzed each year and calculated a “retention rate” or, more simply stated, the percentage of sold discs in relation to the number of sold movie tickets.
Now, not everyone who buys a blu-ray or DVD did see the movie in theaters, some wait for the home video release and never go to the movies, but overall I believe that the ratio of sold discs and sold movie tickets can be a gauge for relative popularity, do people want to see the movie again a few months later? If the audience that saw a movie in theaters wants to see it again at home they are more likely to buy a disc than an audience that doesn’t feel it needs to see the movie again. And I also assume that people who wait for the home video release are more likely to buy the disc when word of mouth after release is positive rather than negative.

Unfortunately, the two statistics used here, box office and home video sales, use two different metrics, box office is based on money, home video sales are based on the number of sold discs. So I used the average movie ticket price in the USA to calculate the number of tickets. Average ticket price data for each year is provided by the National Association of Theatre Owners and is as official as it can get.

With that out of the way let’s first take a look at the number of movie tickets sold for the top 10 home video releases in 2016, 2017 and 2018. Please note that a home video release in 2016 could have a 2015 theatrical release. The data for 2018 is preliminary, some high profile movies are still missing from the list, so overall number of tickets sold will ultimately be higher and might even exceed the numbers for 2017. 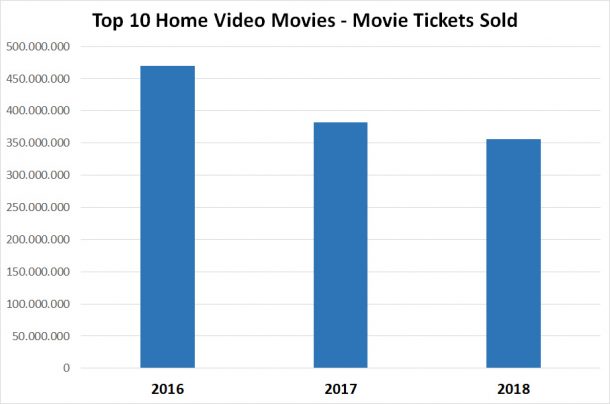 As you can see movie ticket sales for the top 10 movies are declining. This mirrors the general trend. Box office in North America is declining and 2017 was a new low. 2018 might see some better numbers due to some high profile movies that were very successful at the box office.

Things get more interesting when we look at the number of discs sold (discs means blu-rays and DVDs combined). 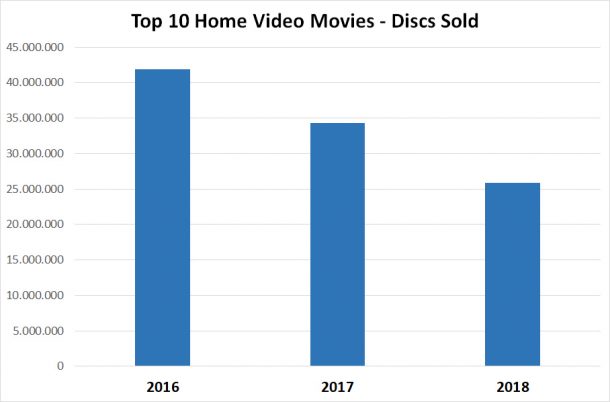 Please note once more that 2018 is preliminary, the Avengers home video release is missing, Black Panther is still selling, but despite all that 2018 will most likely see fewer sold discs than 2017. This is no surprise really, home video is declining in favor of streaming.

As I said before it’s more or less impossible to accurately compare home video sales for movies that were released in different years. What can be done, however, is comparing the releases from the same year.

In other words: how did The Force Awakens do in 2016, how did Rogue One do in 2017 and so on. For this I calculated the aforementioned ratio of disc sales to movie ticket sales. Before I get into the results let me tell you what I expected: I expected to see Star Wars on top, or to be near the top, i.e. to have a relatively high percentage, meaning that a large percentage of Star Wars (or movie) fans who either saw the movie in theaters or waited for the home video release buy the discs. The results, however, are somewhat surprising. 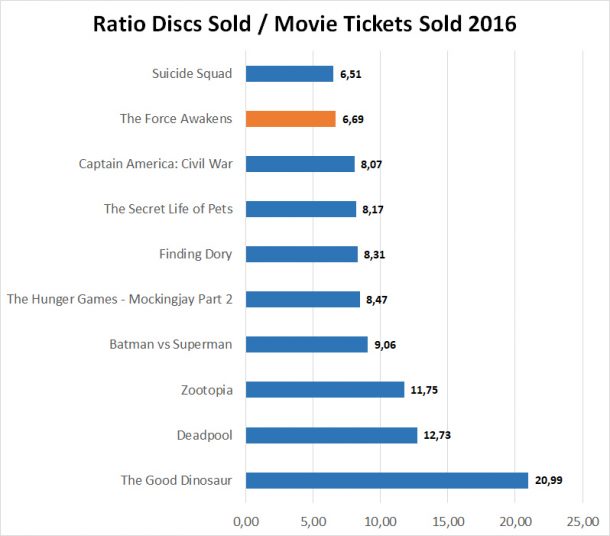 And here is the first surprise, while The Force Awakens was the top selling home video release of 2016 (7.4 million discs) its ratio of discs sold to movie tickets sold is quite bad, actually The Force Awakens comes in 9th place only.

In other words: movies such as Deadpool or Captain America convinced a higher percentage of moviegoers and people who wait for the home video release to buy a disc.
The Force Awakens was a box office juggernaut, so maybe people saw the movie who usually don’t go to the movies and don’t buy blu-rays or DVDs. 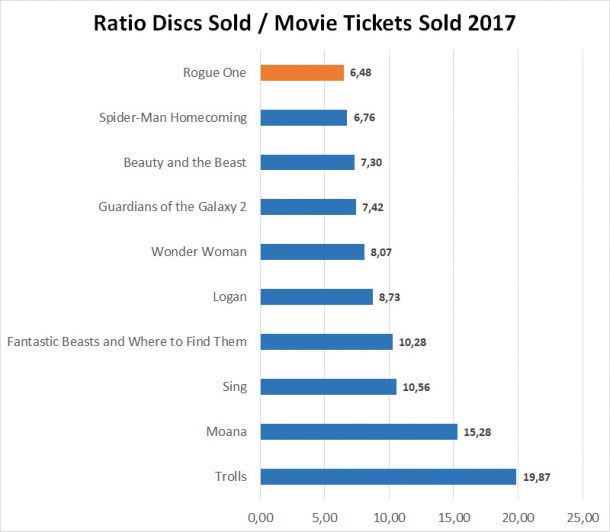 And Rogue One is in 10th place. A certain trend materializes, the positive outliers, the movies with a very high ratio, seem to be family movies, “The Good Dinosaur” in 2016, “Trolls” and “Moana” in 2017, which means that parents with kids either wait for the home video release or loved the movie so much in theaters that they must have the disc.

But when we compare Star Wars to its peers, movies such as Guardians of the Galaxy, Wonder Woman or Logan, movies that most certainly attract similar people, we can see that Star Wars simply fails to convert as many of its moviegoers (or people who wait for the home video release) to actually buy the disc. It seems that with Star Wars, a larger percentage of fans is content with seeing the movie in theaters and doesn’t need to see the movie at home.

Of course streaming is unaccounted for. However, since I only compare movies released on home video in the same year the same overall conditions apply. I find it unlikely that Star Wars, for some reason, has a much higher percentage of streaming views than a movie such as Guardians of the Galaxy or Wonder Woman, which also appeal to a similar demographic. 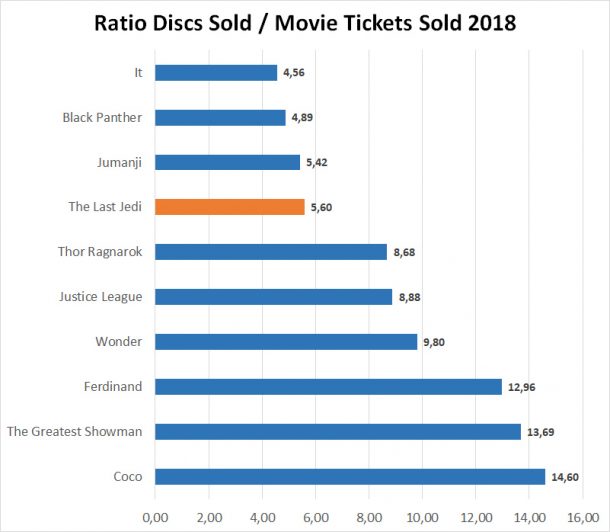 Please note that Black Panther only has very preliminary numbers.
Once more a similar picture emerges: a family movie has by far the highest percentage, Coco. And once more Star Wars fails to convince most of the moviegoers or fans to actually buy a disc, while both DCEU movies have higher ratios.

To me, the results are puzzling. I started this investigation thinking that Star Wars would certainly come out on top. But instead, it’s trailing all the other major franchises. Both the MCU and the DCEU have higher ratios, meaning a higher percentage of people who either saw the movie in theaters or wait for the home video release actually bought a disc.

Now, these ratios are independent of fandom size, since we’re dealing with percentages only here.

Now the question is, why does Star Wars fail to convince a higher percentage of moviegoers (fans) to buy a blu-ray or DVD?

Here are some possible explanations I can think of:

I have really no idea what’sa going on here. Could it be that, generally speaking, the Disney era Star Wars movie have a lower rewatchability value than similar movies such as Guardians of the Galaxy, Deadpool or Justice League?

Unfortunately, no numbers exist for the Lucas era movies. So I can’t tell you how things were for the prequels. It was the time when DVD was just about to make VHS obsolete. So it is unknown if Star Wars always had this phenomenon of a relatively low percentage of disc sales, compared to movie ticket sales.

But even if the situation was similar back then, the question remains why Star Wars doesn’t have a similar ratio to at least the DCEU or MCU movies.

Because, one way to look at the data is to say that the Disney era Star Wars movies are not as popular among its fans as comparable movies from other franchises.
But why does Star Wars top the box office so many times then (until recently, that is)? Do the movies just have a low rewatchability value and moviegoers are content with seeing the movie once (or twice) in theaters?

It will be interesting to see how Solo performs. Will its ratio be similar to that of the other Star Wars movies? Box office is considerably lower. I will write a follow up article in a few months from now when data for Solo and complete data for 2018 is available.

For now leave your thoughts in the comments. I am interested in hearing your explanations for this odd phenomenon of Star Wars movies that, for some reason, fail to convince a higher percentage of its fans and moviegoers to actually buy the home video release.

Previous Article: The Black Series [Phase III] 6" Captain Rex For Under $7 On eBay