While the retail apocalypse is a much discussed topic, with the disappearance of TRU in the USA and UK the most memorable blow to brick and mortar toy retailers in the past few months, the toy market still saw very strong growth in the first half of 2018 in most markets, including the USA which posted really strong numbers. And one of the leading trends of the global toy market? It’s collectables and youth electronics! How did action figures fare? And where exactly is Star Wars? It used to be the number 1 toy property worldwide not so long ago. But not anymore. Click through for more details! 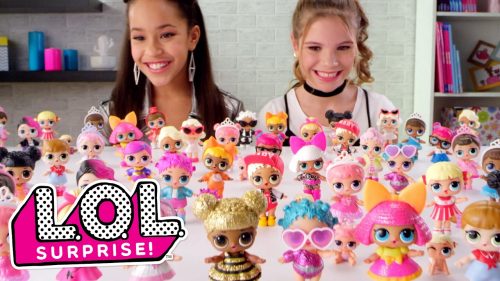 The NPD group released their toy market reports a short while ago, both for the international market and the USA. And overall, things look really bright. Just not that much for Star Wars since the growth in the industry comes mostly from other brands.

First up, some numbers for the international toy market.
Global toy sales rose by 4% in the first half of 2018 to $18.3 billion. The NPD Group tracks 13 international markets and most markets saw growth, with few exceptions.

Worldwide, collectables are still on the rise. This category grew by 26% in the first half of 2018.
Leading brand here is LOL Surprise, some kind of surprise egg with a doll inside that can be accessorised with various outfits.
Youth electronics is performing even better, it grew by 29% and primary driver of this growth is Fingerlings (some kind of small doll/figure with sensors that react to touch).
The dolls category grew by 17% worldwide, led by LOL Surprise once more, then Hatchimals (similar to Furby, they hatch from eggs and need your attention) and Barbie (which will make Mattel happy).

Here is the full list of the top 10 worldwide toy properties:

How are things in the USA?

In the USA the action figures & accessories category saw very strong growth, dollar sales increased by 16%, this healthy growth follows a decline in 2017. Main factors for this strong growth are Black Panther, Avengers and Jurassic World, according to the NPD Group. Star Wars is not mentioned here, and while Hasbro said that their Star Wars toy sales saw some growth, Star Wars is outperformed here by Marvel and even Jurassic World, which supports Hasbro’s own report which explicity stated that Marvel saw very strong growth.

The fastest growing supercategory in the USA is youth electronics, with 43% growth. Youth electronics are toys that interact with a smartphone, tablet or some other device / input. This growth is largely driven by Fingerlings, Star Wars (yes) and Tamagotchi. Fingerlings are small creatures with sensors that react to touch, whereas Star Wars has Force Link. So it seems that despite popular opinion here on JTA 5 POA Force Link figures ARE a success, sorry guys!

Despite the popular opinion that kids no longer play with toys, this assumption is wrong. As can be seen by things such as LOL Surprise, Fingerlings and Hatchimals, kids do like toys and especially dolls/figures, either as collectables or as figures that interact with you.

Also, 5 POA and especially Force Link is here to stay, since it apparently is a success, at least according to the NPD Group. Toys with some electronics and that somehow interact with you are the fastest growing toy supercategory in the USA and worldwide the picture is pretty similar, so these toys are definitely not going away any time soon.

Also, the action figure market is seeing growth again in the USA after some years of stagnation or decline. Unfortunately, at least when you are a Star Wars fan, this growth is driven not by Star Wars, but by Marvel and Jurassic World of all things, which does have a really strong toy line in 2018, now that Mattel has taken over from Hasbro.

So this is it: 5 POA is here to stay, it’s a success, kids love toys with electronics and that interact with you. And currently Star Wars collectables / action figures play second fiddle to brands such as Marvel and Jurassic World. However, as the numbers show, people do love their action figures, and if or when Disney/Hasbro release more interesting figures to fans again Star Wars might be the number one brand once more. But this all depends on the new movies and how collectors will embrace the corresponding figures.

Please keep all that in mind next time you demand for 5 POA toys to be canceled. Grumpy, old collectors are not all there is.

Also, Europe is the only market that saw a decline, the UK is one of the huge toy markets in Europe that offset growth in countries such as Germany, Italy, Spain and Russia.

So, what are your thoughts? Any surprises for you? Will you begin collecting LOL Surprise figures right after reading this article? How do you feel about the state of Star Wars toys in 2018 and that Marvel is now more popular?