A Little Insight Into Modern Toy-making

My dad sent me a picture of the PZ-4CO action figure that he picked up today. I had remembered reading somewhere that “Peazy” was of feminine programming, so I looked it up just for fun. I stumbled upon an obscure interview with the actress who portrayed Peazy. Click through for more… 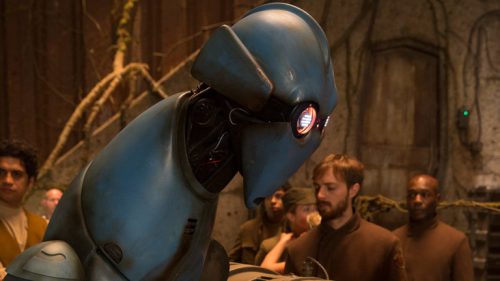 Aside from some neat interaction with Anthony Daniels, Miss Cuzner provides some interesting info about modern toy making. Perhaps this is not new knowledge, but I thought it was interesting enough to share:

There’s a PZ-4CO action figure! When did you find out you were ‘immortalized’ as a toy and what was your feeling then?

During the filming of The Force Awakens, I was taken to another studio to be “scanned”; a very fascinating and technically brilliant method of taking literally hundreds of photographs to enable a toy to be made to the exact specifications of the droid. It was at this moment that I became aware that she was going to be a Star Wars action figure. I was over the moon about it and couldn’t wait to see her. My mum bought me my first one and she is still in her box, sitting on the shelf above my television.

I think it is pretty amazing that we are in a day where such technology exists to make amazingly accurate toys. I’m sure that this level of detail adds to the time it takes Hasbro to give us new figures (not a knock). I personally like the PZ-4CO action figure despite its limited articulation especially since it is one of the only droids produced by Hasbro in the last several years.

What are your thoughts on this technology? How does it change the way action figures compare to vintage ones? What would you have done if this was how they produced action figures in 1978?