The State Of The US Toy Industry

Availability of action figures at brick and mortar retail stores has been a topic of debate lately. But what is the state of the US toy industry and US toy retailers in 2018, after the demise of Toys R Us? Click through for more details! 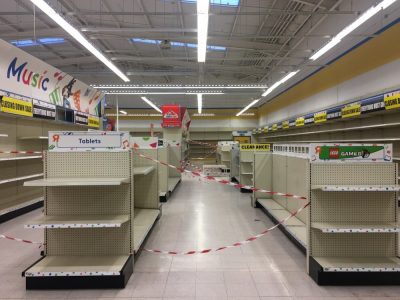 Quite a few Star Wars fans bemoan the lack of availability of new or desirable action figures at retail. Toy runs seem to become a thing of the past. People not living in the USA have known this feeling for quite a while, actually, since online shops are the primary source of action figures for many people overseas. With Toys R Us no longer an option in the USA the question is how this reflects on the US toy retail landscape and overall US toy market.

To illustrate the ongoing trend in the US toy industry I want to show you the following statistic: 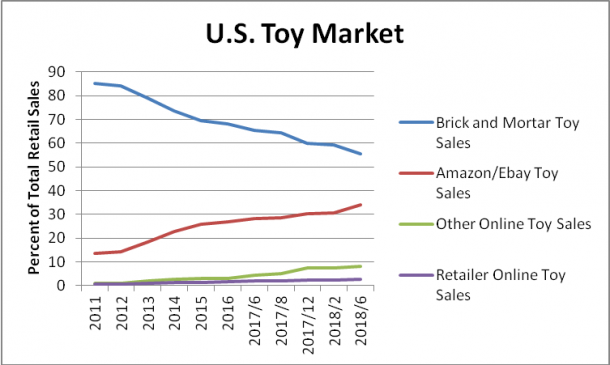 The statistic is from an article on Seekingalpha.com by toy industry expert Lutz Muller, which I encourage you to read. You will find the link further below!

Anyway, here you can clearly see what’s going on in the U.S., a continuing trend to online that, after a peroid of stagnation, saw a sharp increase after the demise of TRU. And quite worrisome for the traditional discount stores: their online shops are far behind, a blip on the radar, so to speak. Even specialty online shops (think Entertainment Earth or Dork Side Toys etc) have a larger share of the toy market than the online presence of Walmart, Target & co. combined.

Then there’s another thing to look at: allocation of shelf space to toys. What happened after the demise of TRU? The same article mentioned above also has this interesting statistic: 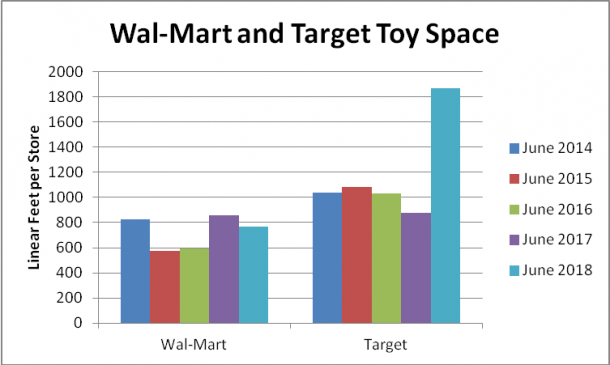 What you see here is that Target is obviously trying very hard to benefit from TRU’s demise by offering more toys in their stores, the TRU customers need to go somewhere, after all, whereas Walmart hasn’t really done anything yet, in fact, shelf space has even shrunk somewhat year on year. As things are now, Target, on average, has more than twice the shelf space allocated to toys than Walmart. 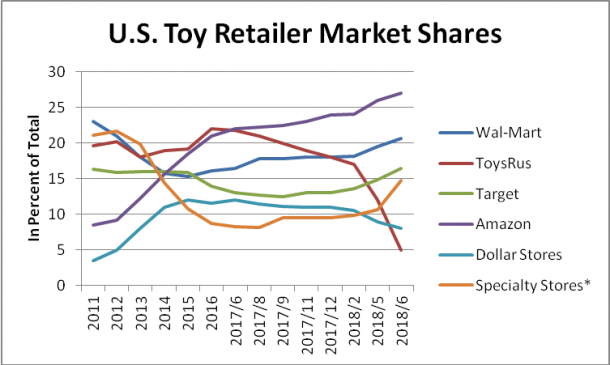 We can see that Target is gaining ground on Walmart, while Amazon (including third party sellers) is pulling away some more even and is the dominating retailer for toys in the USA. But the biggest beneficiaries are actually the smaller Mom & Pop toy stores, i.e. specialty stores, they saw a sharp uptick and now trail Target only very slightly. Specialty stores have been under heavy pressure by Amazon and others in the past, but it seems the demise of TRU has given them lots of new customers, which is great news. Walmart and Target don’t offer some of the toys parents want for their kids, so specialty stores step in.

What does that mean for Star Wars?

Walmart and Target are still very important players, Target even becoming more important than before. But nothing can beat the combined might of Amazon and 3rd party sellers. So maybe Hasbro should focus even some more on online and perhaps even smaller specialty shops, especially when they want to reach certain demographics that frown upon certain stores. Some people never go to a Walmart for various reasons, for example, some states don’t even have a Walmart.

Maybe Hasbro should also think about giving more exclusives to specialty etailers. I believe availability would be less of a concern then.

The question is if a toy line geared towards adults does have a future in giant discount stores where people care more about good deals and saving money than buying unneeded (for daily life, that is) luxury items. TVC and the Black Series are still treated as toys, mostly, by Hasbro, but truth is that the customers who buy these figures are adults (mostly) and we consider them collectibles, affordable collectibles, but collectibles nonetheless.

So maybe Mom & Pop toy shops, specialty etailers and Amazon is where TVC and the Black Series should be headed. Wouldn’t it be nice to have a small(er) toy store around the corner that caters to your collector needs? Truth is though, the specialty stores don’t sell that many action figures yet (see the article I will link to for numbers), but maybe that can change. Maybe adult collectors should go to a toy shop nearby and ask about TVC and Black Series, maybe if these specialty shop owners realize that there is demand for these things, they will order figures.

I suppose a specialty toy shop or a specialty etailer is actually the best environment for things like TVC or Black Series. 5 POA toys are perfect for large discount stores. You don’t want a collectible toy line to have this aura of being something that ends up in the discount bin or will be sold for 3 cents. This undermines the brand image, is reason for ridicule and it hurts the toy line overall. The perceived value of the figures is much lower when Walmart and others keep selling the figures at sometimes ridiculously low prices. And it makes quite a few people regret buying the figures at full price shortly after release. Buyer’s remorse is something that should be avoided.
I believe going the specialty etailer and specialty toy store route (and Amazon, as usual) can prevent this or at least contain it a bit more. Also, wouldn’t it be better for the brand overall if the adult oriented toy lines are sold by (online) stores that actually care about toys and action figures? To Walmart or Target toys are just yet another product they sell. Nothing special.

What do you think? Do you want TVC and Black Series to have a presence at Walmart and Target? Does your Target nearby have more toys on shelves, as is indicated by the statistic shown in this article? What about Star Wars toys? More or less shelf space? And would you prefer it if the focus shifts to online and independent toy stores? What about the idea that Hasbro gave more exclusives (if there must be exclusives) to specialty etailers or Amazon? Leave your thoughts in the comments!

Source for the statistics: Seekingalpha.com article about three challenges for US toy manufacturers in the US in 2018 by Lutz Muller.