The Force Awakens Is The Most Favourite Movie Of The 2010s

Digital photo site Shutterfly asked more than 1,000 people for a representative survey what defining movie of the 2010s they would put in a time capsule to conserve for posterity. And the winner with the most votes: The Force Awakens. But when you look at the details of the results an interesting trend can be seen that should be cause for alarm for Disney. Click through for details. 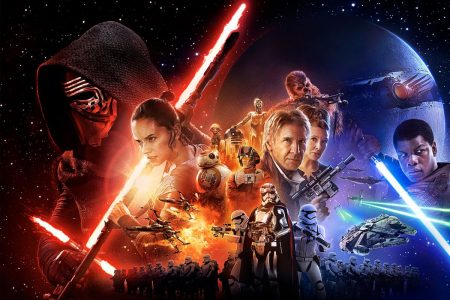 The respondants were evenly distributed across all age groups and while The Force Awakens was the most popular movie overall, results vary greatly between the age groups. And here is where things get interesting and may be cause for alarm for Disney and Lucasfilm. Because, as it turns out, mostly older people voted for The Force Awakens. The much coveted group of 18-24 year olds feels much less love for Star Wars, it seems.

Here is the distribution of people who voted for The Force Awakens: 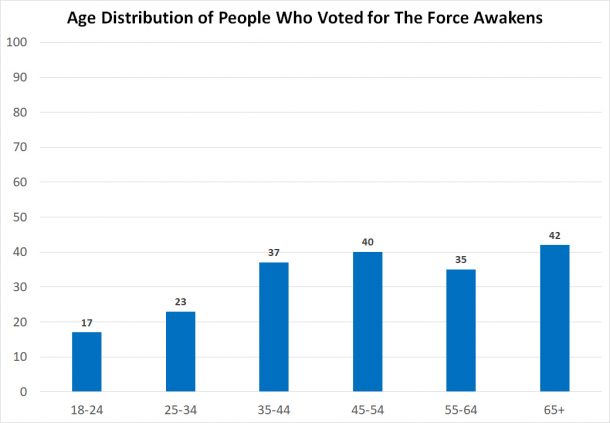 Note: respondants could choose 1 to 3 movies for their time capsule

As you can see it’s mostly the people aged 35+ who voted for the movie. And people aged 65+ loved the movie the most. These are the people who were in their early 20s when A New Hope conquered cinemas across the world in 1977.

The most popular movie in the 18-24 demographic however is “Get Out” by Jordan Peele, 39% of respondants in this demographic wanted to put this movie in their time capsule.

Now, the 18-24 demographic also happens to have the highest per capita movie attendance in North America. And the 25-39 demographic has the highest overall share of moviegoers. And it seems The Force Awakens is not doing too well here, at least with people younger than 35.

Now, the survey may be more anecdotal than not, also, Shutterfly merely provided a list of 18 movies respondants could choose from (The Last Jedi was not on the list, neither was any of the Avengers movies), so you could not just vote for any movie, but still, the survey seems to corroborate what other surveys have found before: that the average Star Wars fan is older (and male).

The Force Awakens is a lot less popular in the 18-34 demographic than an indie horror movie and a Marvel blockbuster. This could mean trouble is ahead for Disney. Because if Star Wars fails to capture the enthusiasm of the younger generation and relies on long time fans who have been with the franchise ever since the 70s/80s and 90s then it could very well mean that in the long run Star Wars will lose a lot of its audience.

This may explain why Lucasfilm tries so hard to win new and young(er) fans, kids. But Forces of Destiny never really caught on, it remains to be seen if more adults than kids watch “Resistance”, a show aimed at younger people.

And once more, this survey is probably not the most scientific survey out there, but it’s nevertheless a snapshot and it confirms what many people have said and felt for a long time. Star Wars, it seems, is mostly for older people, adults. The movies are loved the most by people who grew up with Star Wars when they were kids. The young generation is not that attached to Star Wars, they may go see it in theaters or stream the movie, but they actually like the MCU and an original horror movie better. Maybe they just offer better entertainment to them than Star Wars can, at the moment.

What do you think? Should Lucasfilm do their best to serve the customers and fans they have – or should they risk alienating them, but finding new fans instead? Is Star Wars destined to become something for older people only?