Sneak Peek At Enfys Nest And Her Swoop Bike

I received my Enfys Nest with Swoop Bike set a short while ago (in Germany) and wanted to give you a very brief look at the set. Nothing fancy. I’m not the resident figure reviewer on JTA. Paul’s review will follow shortly, most certainly, but before he will tell you all the details you’ll ever want to know let me show two or three photos! Click through for more! 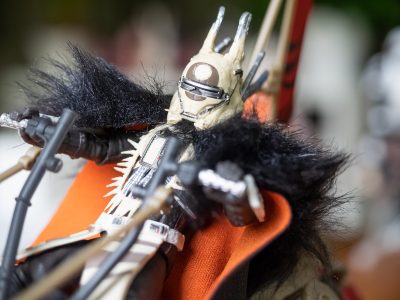 So without much further ado a quick comparison shot of Enfys with her bike with Rey and her speeder and the Scout Trooper with his speeder bike: 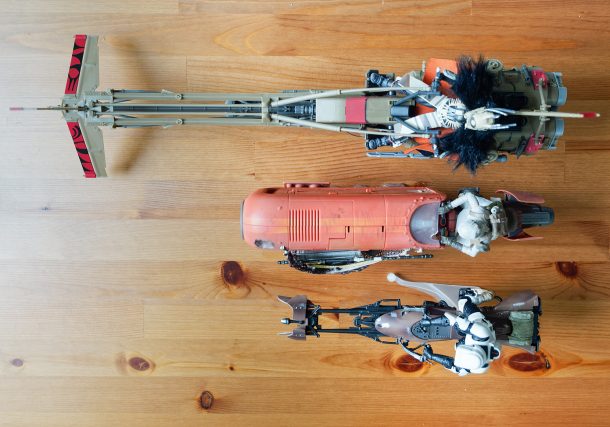 The Swoop Bike is long. As in very long. Very, very long. The bike is really, really, REALLY long. Just to emphasize it once more! It’s 52 cm in length that’s almost 20.5 inches. Enfys and her Swoop Bike will never fit into a Detolf cabinet so you need to find some other place for her. She’s standing on top of one of my Detolf cabinets.

The following info is exclusively for Paul:

Enfys and her Swoop Bike weigh 431 grams
Rey and her speeder are 456 grams (Rey should eat fewer space burritos?)
The Scout Trooper and his bike weigh 194 grams

So despite the length and overall bulk of the set the bike weighs less than Rey’s speeder which also feels much more substantial in your hand, the Swoop Bike does feel very lightweight.

Some very general thoughts about the set: it looks ok, and it is quite impressive due to its length. But for the suggested MSRP it should have not been just mostly cast in colored plastic. The paint job is similar to what the Scout Trooper and speeder bike got, some weathering here and there but the paint job on Rey’s speeder is better. The Swoop Bike could have used some oil streaks etc here and there perhaps. The bike itself has quite a few details though. A custom paint job will certainly let the bike shine.
Enyfys herself is alright. Unfortunately her helmet is cast in ages 4+ plastic, which means it’s quite soft and therefore can’t hold intricate details so well, maybe Hasbro should think about making the Black Series ages 12+ or 15+ and use some harder plastic that can hold details a bit better. We won’t poke our eyes out either, promise, Hasbro!

Enfys’ weapon is a letdown, unfortunately, it has exactly zero paint and looks very cheap. It’s detailed, but looks like a cheap plastic toy weapon. Hasbro could do more here. And should.

Enfys can sit on the bike alright, it’s not perfect, but ok.

No unmasked head is included, but we already knew that. Hasbro probably learned the identity of Enfys when they watched Solo in theaters.

And one final photo of the whole freaking long Swoop Bike on the balcony, it’s rained recently and the squirrels left some peanut shell crumbs behind, I don’t mind, I hope you won’t either, Paul will give you all the fancy photos very soon! 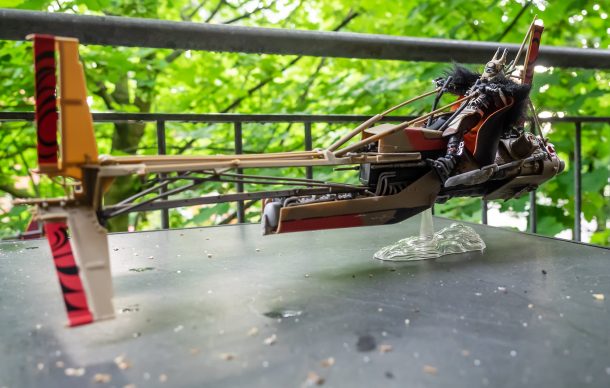 Born to be wild

My personal recommendation is: wait for clearance. At a price like this, especially in Germany, where the set is $94 (yup, only 100+% more than in the USA), we should get a) an unmasked alternative head b) a weapon with at least some paint or weathering and c) a Swoop Bike with some more paint details as well.